I'm a simple soul me. I don't go out to find obscure beers, but beers that I can sup with pleasure and depend on. That is, incidentally, how most people drink and why, despite the bumping of gums by beer geeks about it, good old fashioned brown bitters, golden ales and mainstream lagers are so popular. Difficult to drink beers are and always will be, a minority obsession. 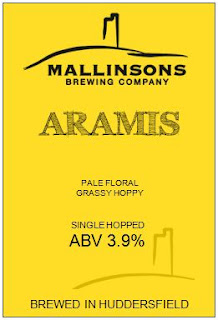 But I digress. I was pleased therefore to walk into the Regal Moon last night and be offered a choice of two old favourites, so I compromised and had both - not together - but one after the other of course. Ossett Silver King is a very clear, pale beer, with a crisp citric bitterness that makes it very easy to drink. A fairly regular option in the Regal Moon, it was my first non Lees beer of 2013, so a milestone of a sort. Next up was Hawkshead Lakeland Gold. Another pale one, but not as pale as Silver King, but with the emphasis more firmly on bitterness. Very pleasing with my ham, eggs and chips - told you I'm a simple soul.

And so to the Baum and the main event of the evening, my CAMRA Branch meeting. The Baum, as befitting its status as Greater Manchester Pub of the Year had a great selection on. My eye was drawn as if by a magnet to a name that always inspires confidence - Mallinsons. This time Aramis, using the French hop of that name. Pale, bitter, zesty with a full tasting bitter finish, it was a lovely beer. Of course,the thirty odd CAMRA members soon saw this off. Good for business we are.  The replacement was another Mallinsons beer, this time Tethys, using Sumer hops. Not a hop I've heard of and not as strikingly good as the Aramis, but pretty decent, though if given a choice, I'd have supped them in reverse order.  I finished on another very bitter beer in top condition. Marble Beers need no introduction and Marble Best did not disappoint, with a great malt backbone, backed up by layers of bitter, resiny hops. A splendid beer.

So my point is the familiar need not be boring. Beers from Ossett, Hawkshead, Mallinsons and Marble are beers not only to drink with confidence, but with clear enjoyment.

We had 34 members at our meeting last night. Good for business indeed.
Posted by Tandleman at 13:41

Crikey, thats 5 pints. Or 10 units if standard 4% beers. In one night, a school night too. Jeez are you aware of the 3 unit a day, 21 unit a week recommendation?

Two things. I don't go to school and of course I drank thirds only, carefully tipping out any excess to get down to the recommended unit intake.

I will naturally eschew alcohol for the approved three days this week.

Two of these statements are true.

Fantastic blog! Do you have any tips and hints for aspiring
writers? I'm planning to start my own blog soon but I'm a little
lost on everything. Would you advise starting with a free platform
like Wordpress or go for a paid option? There are so many options out there that I'm totally overwhelmed .. Any recommendations? Bless you!
Feel free to surf my web blog ... christian louboutin shoea

Ham Egg and Chips - and a few pints. Tandy, you'll do for me.

You'll ought to walk through a metal detector. In the past, only accidental travelers were definitely asked to get rid of their boots for examining. Your shoes shall be x-rayed, along using the rest within your carry on [url=http://www.saclongchampachete.com/category/sacs-longchamp-cuir]sac longchamp 2012[/url] baggage.
A lot, as effectively as recently available months, 2013 bags long champs[url=http://www.soldesacslongchamp.info/category/longchamp-sacs]longchamp soldes[/url] go rules have changed. If you plan on traveling, you will find that many of these changes include occurred proper at airports, take a bag[url=http://www.sacslongchamp2012.info/sacs-le-pliage-longchamp-hobo-c-23.html]pliage longchamp hobo[/url] is nice.

No subject what the important weight limit to your airline is, your proceed bag must be light good enough to as a minimum lift upwards into ones own overhead compartment without having to be a safety issue intended for other voyagers. ugg [url=http://bagsmarcbymarcjacobs.webnode.jp/ニュース/]マークバイマーク[/url]. A many airlines characteristic something called a sizer compartment at the very gates. The purpose of these sizer gates is always to see in case you are permitted to transport on a particular type for [url=http://saclongchampsoldes.monwebeden.fr]longchamp[/url]}.
welcome to go to more related to hermes online: [url=http://www.torybruchjp.info/category/トリーバーチ-店舗]安いトリーバーチ[/url]

They maybe familar but these breweries haven't been around that long. I rarely have a great pint of familar beers from the brewers who have been established for donkeys years, I don't know why either .

A JW Lees publican does a runner but not only is he slagged off so is the brewery.......

I assume a pernickety argument on your first paragraph from a gum bumping beer geek (say that after 3 pints of imperial stout) would go down like a fart in a lift?

Nice post otherwise though. Isn't it what we all want? Reliable breweries producing reliable beers with a reliable supply?

As a gum bumping beer geek every beer above is one id be pleased maybe even excited to find in my local. (ok actually not excited by the osset but id do night on it if needed)