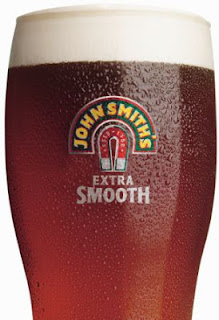 So, Heineken is about to reduce the strength of John Smith's Smooth to 3.6%? Nothing all that surprising really. In fact what is surprising is that it took them so long. As they point out themselves, their rivals are already at (or in some cases below) 3.6%, so there is little risk to sales in doing so. I somehow doubt that many drink it because of its alcoholic strength - quite the reverse in fact - for smooth keg ales of that ilk are hardly aimed at the discerning part of the market, but the convenience and commodity part of it.

There is of course a tendency for beers to drop in strength as pressure is put on the trade over alcohol and we have seen premium beers slowly slip, bit by bit under 5% and nearer to four. Is there a point when standard bitters, like Lees at 4% and Robinson's Unicorn at 4.1% become the new premium bitters? We are some way off that yet, but certainly, they would tend to fall into that old and almost forgotten category of Best Bitter, which the likes of Timothy Taylor's Landlord occupies. Whichever way you look at it, for branded beers - beers that you know by name and reputation - there is now considerable bunching around 3.6% to 4.2%.  Of course, you could make a fairly convincing case for saying it was ever thus, but in the past you would have been offered a stronger alternative.  That isn't so likely now.

Price of course has a part to play. It is no surprise to read that Heineken, while saving £6.6 million in duty, will put the price of the reduced gravity liquid up by 2.5p a pint, which will equate no doubt to even more than that in the pub, though no doubt, places like Wetherspoon will look to improve their discount to alleviate the effect on customers. And make no mistake, without huge discounts, Heineken wouldn't shift nearly so much of it, even if it is a "must have" beer for low end pubs.

Will this trend see a creeping down in the alcoholic strength of standard (cooking) lagers? I'd watch that one very carefully. With Carling and Fosters at 4% and Carlsberg at 3.8%. I wouldn't be at all surprised.  It may be cynical, but in big volume beers, which sell on brand image and familiarity, rather than taste, there is money to be made in reducing alcoholic strength.

Brewers of course see this as a victimless crime, but there are losers.  The customer for one and the Treasury for another.  And when the Treasury lose money, they find a way of getting it back.

The cask version - if you are unlucky enough to come across it - will stay at 3.8%
Posted by Tandleman at 11:19

I think there is a customer base that actively like smooth ales, so I'm not at all sure they sit entirely at the commodity undiscerning end of the market. Though CAMRA may like to think so. People that choose it over other beers. Mainly older gentleman, I suspect. Though a sector in decline it is only recently that cask ale has overtook it. John Smiths is a volume brand compared to any cask ale you can mention. Never figured out why. Regular canned bitter is okay, the foamy widget stuff is quite nasty. A mixture of Dettol and shaving foam might be an adequate substitute for those upset by the move.

I've seen people walk up to the bar in pubs and ask if they had any smooth, so some must actively prefer it over cask. As Cookie said, mostly middle-aged and elderly blokes.

"The cask version - if you are unlucky enough to come across it ..."

Hey now, I've come across it and drunk it, and consider myself lucky for having done so. Palate training!

is that simulation game advertised about John Smith Smoothflow simulating a beer.

I guess when cask was in decline smooth beers like John Smiths and Tetley's, being keg, were the only consistently reliable alternatives. I certainly remember buying both regularly as a student when dragged into pubs that either had no cask or where I knew the quality would be questionable.

Many people will have switched to these smooth beers at the time and are clearly happy enough to continue drinking them despite the recovery of cask, not to mention the recent influx of (dare I say it?) craft keg beers available.

Smooth beers were originally developed in the mid-90s at least partially as a way of making keg look and feel more like cask, with a thick creamy head and no obvious fizziness.

Curmudgeon - "Smooth beers were originally developed in the mid-90s at least partially as a way of making keg look and feel more like cask, with a thick creamy head and no obvious fizziness." ...... and no obvious taste??

ps. Who said cask needs a "thick creamy head"? It certainly doesn't where I come from!

There will always be a market for the lower end of the market, but a flavoursome decent beer at low-to-mid strength will always be preferred over "smooth".

It's sad really, policy is making a product change , what would happen if policy made the taste of Marmite or Coca Cola change. I used to like a pint of Old Speckled Hen and then that got ruined, why can't people come up with more inventive ways of changing things?

I don't doubt that there are some adherents of nitro beer, but the beers themselves tend to be sold at low end establishments.

And Neville. Stop watering our beer then please.

We will have to see whether cooking lager brands take a dip. Over the years Carlsberg has been lower than its current 3.8 but at one point it was 4.2 Carling was 4.2 a few years back then dipped to 4. The wifebeaters have already dipped to 4.8, I guess we will wait and see.

It's all about brand management and currently big brewers care about there volume lager brands and are extending them into 2%, 2.8%, 4.7% versions of Carling so why alter the main product?

Heineken have spent to long rebuilding their core brand to make it anything other than the authentic import. They consider John Smiths smooth as a declining brand to cash cow. Wouldn't be surprised if Fosters was in that category too.

I thought the £6.6m figure seemed high for such a small reduction in ABV, so I checked the sums.

The rate of beer duty is currently £19.51 per point of ABV per hectolitre.

So the saving pro hectolitre is £3.90 (around tuppence a pint).

Which, staggeringly enough, seems to fit with the output figures Wikipedia and other sources give for John Smith's. 300 million pints!

Which is not far off half the total amount of cask beer sold in the country - suggesting that JS has a very high share of the keg market.

That's the last time you get a ride on my yacht, TM.

You seem to have more spam, TM, than Dewhursts.

I am inundated at the moment. You ought to see what doesn't get through.


I want to to thank you for this wonderful read!! I certainly loved every bit of it. I have got you saved as a favorite to look at new things you post…