I don't like to start the New Year on a negative note, but it is the blogger's lot to speak as you find. 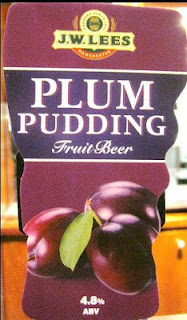 I was in a local Lees Managed House over the festive period and keen to try Lees Christmas Seasonal, Plum Pudding, I ordered a pint.  The young barmaid waited while the manager was using the handpump.  There was a pint of Plum Pudding sitting at the side.  The manager said to her colleague "You can have this."  I immediately said that I would prefer not to have the last pint poured out of a cask - I assumed she was changing the barrel - and said so.  The manager assured me it was not the last pint, but that there had been a problem with the connection and this one was fine.

Now as I am fairly well known in a lot of Lees houses (though not to the manager in this case), I dislike such situations. Someone is bound to say "I see the local CAMRA Bod is in complaining about the beer."  So I reluctantly accepted the pint, which wasn't great, but not bad.  My second pint was terrific though; sparkling, clean and delicious. Night and day.  I knew then I had been "had". Serves me right. I had my doubts and should have stood my ground, but for mixed, or maybe mixed up, reasons I didn't. But I don't like being served beer that on the evidence available to me, was known by the manager to be less than optimal. Cask beer should never be served where there is a doubt as to quality.

It won't be that way next time when I have my doubts.  My first New Year's Resolution!

That's more than a cask gamble, a pint that has been standing? Even I would know enough to say "You are having a laugh, pal, I'd like fresh one", and I am pig ignorant. You, a beer god, accepting such shoddyness? I can only assume it was an off day for yourself as much as the ale.

Couldn't agree more. I heard this voice which turned out to be mine saying a reluctant OK.

An off day indeed and me being daft. Ho hum.

There are some days,old cock, when you just have to walk the walk instead of blogging the blog.

Keyboard warriors are two a penny in this game.

More importantly, the whole idea of a fruit beer doesn't appeal to a hard nut like me.

Although I can see Cookie - who no doubt likes a slice of lemon in his long-neck - enjoying it.

Well Prof Tie Pin I rmght be many things, but two a penny? Nah.

Time to name and shame?

Is it just me, or does plum not sound like an optimal choice of fruit for a beer? I mean, they're a bit mild.

I think the admin of this website is actually working hard in support
of his web site, since here every data is quality based material.
My web blog : Huge adult dating models

I've experienced that once or twice and it never seems like a good idea - but it can be hard to refuse without appearing stroppy. I was once given about three-quarters of a pint, with appropriate discount, in a plainly struggling and now demolished pub.