All Quiet on the Portmadog Front 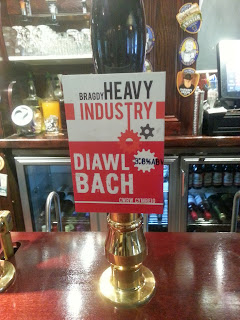 What's not to like when you have a couple of nights away with old friends as we have done once a year for more than the last twenty?  Perhaps when you decide to stay in a run down seaside town like Portmadog that's what.  It all seemed fine when we decided on it. A nice run through Snowdonia and then a night in a pretty town with three Good Beer Guide pubs in it, then up to Chester and a night there. What could possibly go wrong?

Of course history of such events tells us we usually - or at least it seems so - have one day where nothing goes wrong beer wise and one where, disappointment rolls in repeatedly, like breakers on the Irish Sea.  It started promisingly enough in Llangollen where the sun shone and our lunch stop was at the excellent though very run down Ponsonby Arms.  A very pleasant barmaid told us of planned renovations as evidenced by scaffolding outside and the beer, in my case Diawl Bach from Heavy Industry Brewery, had enough hops about it at 3.8% to be very enjoyable.  It was in good nick too, despite us four being the only lunchtime customers.  A wander down to watch the steam locomotives at the preserved railway then took us to the posh Corn Mill owned by Brunning and Price.  Overlooking the railway and the River Dee, this was a beautifully renovated building  with among others,  Dave's Hoppy Beer from Facers, which was maybe just off the mark. A sign of things to come.

Now I hadn't been to Portmadog before and it wasn't quite what I was expecting. The Welsh Highland Railway was nice, as was the harbour, but the town had an ominously deserted feel to it.  We started off with a trip to nearby Tremadog where the busy Union Inn (GBG) offered Purple Moose beers that just weren't anything other than adequate and opposite, the Golden Fleece, built into the hillside and festooned with hops, offered more of the same.  Not bad beer you understand, but a bit tired and flabby. 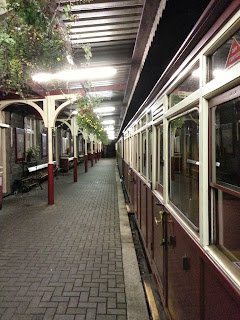 All Good Beer Guide pubs next.  The best bet beer wise in the Station Inn (a bit of a basic boozer) was Adnams Ghost Ship and that wasn't great.  Our earlier experiences of Purple Moose Snowdonia had warned us off that, so after one, we supped up and plodded along to the Ship Inn which offered mainly national brands. It wasn't that busy at all. Our more exotic choice, Lancaster Blonde had that same midweek feel to it.  Last up was the working men's club-like Spooner's Bar, at the narrow gauge railway terminus.  We were persuaded by the barman to try a brand new cask of Snowdonia but it did little to convince us of its inherent qualities and after a couple we left, the boys to seek a curry and me to seek an early night.

It was eerily quiet as I made my way back to our rather nice B&B.  I saw no-one and walking past at 10.15 pm,  I noticed that the kebab house was firmly closed, as was the Chinese Chippy. Can't say I was shocked.

Conclusion?  Take the GBG with a pinch of salt if the pubs are empty and it is midweek.  Quality still cask's Achilles heel.

That part of Wales is very beautiful, but both Porthmadog and Pwllheli down the road are dumps.

I had the misfortune to go in the Guestiana (formerly the Australia) in Porthmadog which frankly was one of the worst pubs I have ever been in.

Maybe a sweeping statement, but in general I always find pubs in North Wales a bit lacking.

I agree. North Wales is to be avoided, if at all possible. Sadly, And as I reported on my last crawl of Chester, Snowdonia has ruined many a good pub there as well.

All is not lost Boys. Await my next post. Chester was great. No Snowdonia is one good reason why.

Sounds like cask breathers could have done a couple of those pubs a favour. (Sorry for raking up what I know is an ancient issue within CAMRA. But I only joined the other year, & genuinely didn't know what they were until reading Mudge's recent blog post on the subject, so it's new to me.)

Mrs & I really enjoyed a week in North Wales 3 years ago, including probably the very best Spoons I've ever been to. Porthmadog was a bit interesting, but we were only there a couple of hours. Snowdonia and Dark Side of the Moose were outstanding back then.

Friendly people, too. (If only because we ain't English?)

I should clarify I meant Purple Moose Snowdonia first of all.

Phil - What these pubs really needed to do was cut their range to suit their likely number of customers. One or two in perfect nick is far better than five or six that are knackered.

Nick - Three out of four of us were English and met with nothing but pleasantness.

No dispute there. It's amazing how rarely you get a duff pint in Spoons, really - it's almost as if they've pushed prices down to the highest point that will keep four different beers turning over while still making a profit. Either that or it's witchcraft.

It's a topic for another post (or possibly a different blog), but I am genuinely interested in the cask breather question - if only because I was once surprised by a cask beer with a definite 'keg' prickle to it, which presumably could be explained by a cask breather with the pressure turned up a bit too high. (In a Spoons, as it happens.)

As the man said, the best thing to come out of Wales is the M5.
You must have taken leave of your senses to think anything happens there after 7pm.
Inbreeding happens for a reason.

The M5 doesn't even make it into Wales...