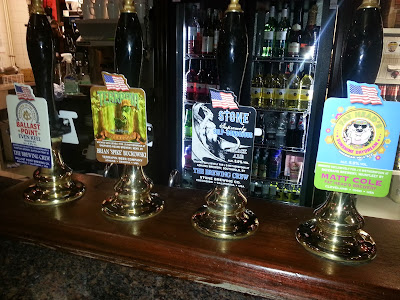 Well not that sneaky really.  The Regal Moon in Rochdale is one of JDW's flagship ale houses.  It is shutting for some refurbishment soon and was granted permission to start the October JDW Fest a bit early.  Chris, the manager, had promised  us that the most sought after beers, those brewed by foreign (in this case American) brewers would be there in force.  And so it came to pass.

Now I often go to JDW on Wednesday nights, but it was a surprise to see Tyson and his retinue of attendants already there and ticking for all they were worth. Think thirds.  The jungle drums could be heard in deepest Bury it seems and they'd charged over the hill (very appropriate) just to steal a march.  Incidentally while the Regal Moon was fairly busy, I noted that the nearby and almost as big Yates had not a soul in it as I passed.  Funny that, but then again, maybe not if you own the place.

Tyson has already named and shamed and as I often do, I mostly agree with his assessments. I'll add a couple of my own thoughts though. To my palate the Ninkasi Cream Ale was a bit like souped up Deuchars IPA, but not really in a good way, being a touch on the cloying side.  The Ballast Point presumably used Marston's yeast and water.  It certainly was a dead ringer for most Marston's beers and unless sulphur is a joy to you, that isn't a good thing.  Brewing these foreign beers in breweries with a particularly distinctive yeast is probably not a world beating idea.

Mind you, the exception was Stone Supremely Self Conscious Black Ale which is possibly the most stunning beer that Wetherspoons have ever had brewed for them.  Adnams yeast was drowned (a good thing in this case)  in a massive hop attack.  Dark as the ace of spades and with a great body, it drank superbly.

I could still taste it on the bus on the way home.  And that too was a good thing.   Seek it out.

The Elysian Avatar Jasmine IPA was at 6.3% a bit of an aquired taste, but my advice is to give it a chance. The jasmine is quite pronounced

Funnily enough, I think that was the one beer on the list I thought it would be worth venturing into a spoons to try. Seeing as I am a fan of both Adnams and black ales in general.


No doubt none of the spoons I go in will have it on.

Get some chilli sauce on yer kebab. Then yer taste nowt on the bus.

You need to up this blogging milarky. There's hardly nowt to read on beer blogs these days. It's getting desperate. I even resorted to reading RedNev's tosh recently, times were that lean.

Get debating craft or summat.

Always a bit of a lottery these spoons beers. But I must admit as soon as I spotted Adnams were hosting Stone I thought "that'll be good". Usually the host brewery rather than the brewer is the biggest indicator of whether it'll be any good at th end - and adnams are from my point of view pretty trustworthy.

Must try this beer but fear I wont get a chance. The St Albans spoons, whilst stunning looking thanks to its location in a huge converted barn, nearly always has crap beers on.

"Tosh" - from the expert, that's a compliment.

I thought the Stone the best beer that Spoons has had on since the last time they had a Stone beer on many moons ago.

Oh and the Wednesday Club does get around a bit and now that I'm homeless, you can expect to see more of me in Rochdale:)

Excellent, thanks for the heads-up! I'm going to Belfast next Saturday to find out how many of the big ten make it to the wee six.

How about a twitcher type heads up , where anybody who spots this black ipa across a wetherspoons bar could post it's whereabouts on here to give us all a chance of a tasting.
Ron

It's not hard to find. As usual with the Wetherfest, the 'international' beers (and other beers from the host brewers) are utterly ubiquitous and delivered far more widely and in larger quantities than some others on the list.

Some of the domestic beers, OTOH, are proving to be extremely elusive as usual. Still need 19 of them.