Dear Do in Düsseldorf 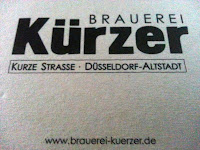 Germany, well North Germany, is getting an expensive place to drink.  On my recent trip to Düsseldorf, the brew pubs in particular, the glorious four of Uerige, Schumacher, Fuchsen and Schlussel all the alt beer hovered around the €1.80 mark for a 25cl glass.  That's pretty hefty, especially when you effectively pay €2, as given that when there was a lot of us and the bill was paid jointly, you ended up chipping in two euros for convenience.  Even when you paid yourself, it seemed a bit petty to wait for 20c change. I'm guessing too that is pretty standard.  Not a great deal for the drinker, but admittedly it was at least nice for the waiter. Twenty five centilitres isn't much either, so you end up with quite a few glasses to pay for.

Germany is wealthy. North Rhine Westphalia is one of the better off places in a better off country. Düsseldorf is one of the better off places in a better off state.  You see the picture.  The place seems to be booming.  The pubs were pretty much full to bursting point.  We were refused admission to some, so busy were they.  Even with these pubs typically flowering into room after room receding into the distance and deep into the bowels of the earth where even more rooms lurk,  it was "house full." There was no room (or very little of it) at the inn.  Dining, despite its sameness in that part of the world, edges drinkers out too and a point for those that think smoking bans always affect trade adversely, North Rhine Westphalia has recently extended its ban to all but the smallest of places and that seemed to make no difference to custom at all.  Pub going was a thriving affair in every way.


Nor, in most cases, did you have to run a gauntlet of smokers outside.  They all seemed just to be getting on with it despite smoking being more or less a national sport. A different world it seems.

There is a degree of confidence, maybe more than that in Germany that you just don't get at home.  More to follow.

Those prices are definitely high when you compare them to Bavaria, where beer is gloriously, blessedly cheap. But if my math is correct, and even ignoring the beating the dollar takes against the euro, the pint equivalent works out to about $4.75--roughly what it costs in my hometown (probably about average for the US--way cheaper than NYC).

If memory serves, you pay roughly the same amount down in Cologne for a .2 liter stange. Considering how fast I threw them down, that did add up. The alts, richer and headier, went down a little slower than those kolsches, which you can drink like water on a hot day.

Is that a 16oz pint though Jeff? I am coming on to Cologne in my next post and yes, it it about the same, but maybe 10c cheaper.

Yes, a 16 ounce pint. (We have no real standards in the US, so pints range from 16 to 22 ounces.) Here in Portland, a pint will cost you between $4-6, and the price doesn't seem particularly well connected to the volume of liquid.

Yeah, a lot of people don't realise how expensive Germany is to drink in a bar. Around Hamburg & Luneburg too you'll pay maybe €3.50 for a half-litre, which is pretty much £3.50 a price - or London prices.

And this is in a country where beer tax is next to nothing, so a 50cl bottle of 8% Aventinus will cost you the equivalent of a quid in a shop, and generic boring cooking Pilsner (ie. most of the German beer production) might be half that. Then think what a profit margin the bars are making... No wonder there is no custom of tipping waiters, the bar can afford to pay them properly!

I'm trying to remember what the prices were like in Bamberg city. I know it was €1.80 or €2 per half in the country Kellers, but they were cheap compared to the city. I think it was still €2.50 to €3 in the city.

And Tandleman, your Alt was €8/litre with your rounding, which is about £3.80 a pint.

No custom of tipping the wait staff...say *what*?!?

Matt; You may well think that, but it skews the arithmetic (math) if Jeff is still reading.

One factor at play is that since McBroons financial crisis sterling has devalued by around a quarter. Other eras would consider it a sterling crisis.

Why is everyone obsessed with rounding everything into pints and then comparing that to other breweries? So you pay 2 euros for 25cl of a 4.5-5% beer? That sounds like a good price to me for the quality of beer, service and surroundings you are getting. The brew pubs of Düsseldorf are small operations using traditional techniques, all of which push the price up. There price point is never going to be able to compete with the majority of cheap cask you can find around the UK mainly just because of the economics of scale, not to mention all the other reasons why producing cask beer is cheaper for a brewery. It doesn't make sense to compare that to the £2.80 pint of 3% mild down the local spoons.

Nor do I think anyone has compared it to Spoons other than you. Oh and btw, these are anything but small operations.

Tandleman, I can't remember what I was paying on my last visit to Cologne (2011), but it seemed a lot for such a small measure of beer.

I go to berlin this weekend (. Plentzer berg - district )
Could anybody recommend any good ale houses ? Ta -
Ron

There is a degree of confidence, maybe more than that in Germany that you just don't get at home.

Could it be because they are sucessful???

more complaints about the price of cheap beer! , the hailing will be shrill when you pay what we pay for beer :-)