Bring In the New


It's a bad habit of mine, but one until now has been born of necessity.  Going to more or less the same pubs in London that is.  Oh of course there are changes and one or two have dropped off my radar and one or two have come on, but it's all been a bit samey.  Thus it was a couple of weeks ago that E and I decided to get out and try pubs neither of us had been to before, or at worst, to ones at least one of us hadn't.  We decided to keep it simple, visiting any pubs we hadn't been in between Cannon Street and the area around Fleet St and Temple. 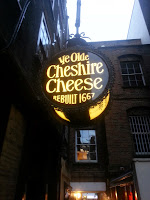 First up was the Old Bell in Fleet St, part of the Nicolsons chain.  Small and intimate with lots of wood, this was cosy and though the welcome was nothing special, the beer was really rather good.  I opted for Gadd's Rye Pale Ale and really enjoyed its dry crispness, while E had no complaints about the condition of her Nicolsons Pale Ale, though she wasn't quite so keen on the beer. Not far for the next one and of course a bit of a classic.  Now I have been in the Old Cheshire Cheese before, though E hadn't and I hadn't been downstairs.  What a gem, with a coal fire, an "olde worlde" appearance which actually is genuinely old and Old Brewery Bitter at sensible prices.  OK it was getting to the end of the barrel, but by no means undrinkable and the place was warm, the barmaid chatty and cheerful and downstairs a revelation, with its benches reminiscent of a German beer hall.  We then had a quick bit of culture in the nearby Romanian Orthodox Church before nipping into Ye Olde Cock Tavern, where although the beer was in splendid nick and the barmaid again welcoming, the beer was badly chosen by me.  Brown and Browner I think they were called, with Brown coming from East London and masquerading under the name Foundation Bitter and Browner pretending to be Hackney Best Bitter.  No real redeeming features, but ten out of ten to the pub for offering something local and in good nick. 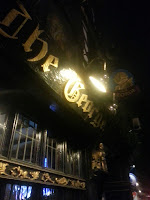 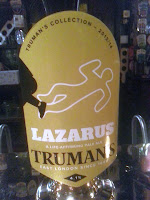 Now funnily I hadn't been to the Old Bank of England before.  A Fullers pub of considerable grandeur and once again, despite its fullness, a warm welcome.  Fullers Black Cab needs a sparkler, but was tasty and my first ESB for quite some time was thoroughly enjoyable, with distinct Seville orange flavours.  Great for people watching too.  We left rather impressed and went on a bit to the George, a thin narrow, old fashioned long bar, bristling with handpumps.  Great quality here too, with Gadd's No 7 pretty damn good and Truman's Lazarus, pale and hoppy, the the pick of the bunch.  An oddity was an "English Craft Lager" called Noble which wasn't anything special.  Fantastic service here too from a barmaid who was a positive blur as she shot up and down the bar. We'll be back here for sure. Leaving there with some reluctance, we decided to retrace our steps, as we'd missed one. The Tipperary is London's oldest Irish Bar and though the craic was anything but mighty from the taciturn barmaid, the beer was again spot on. Portobello Pale was a very decent hop forward golden ale.

If this crawl and my other experiences in my recent six day visit are anything to go by, it isn't just the number of breweries that is increasing in London, but the overall quality and variety of the offerings, though a caveat is that the cold weather must have kept things cooler in the cellar. But you can only speak as you find and I found good things.

We did pop into a a couple more pubs back near home, but as we'd been in them before, we decided the crawl had officially ended at the Tipperary.
Posted by Tandleman at 11:37

Wouldn't mind joining you for one of these crawls, if ever I get time off and the family stops being ill!! I don't get over to that side of London nearly often enough these days.

Noble is also according to Pete Brown a top-fermented "bastard lager" - the modern descendent of Amboss and Einhorn ;-)

I will give you a sparkler for Black Cab :-)

Who are you and what have you done with the real Kieran? :-)