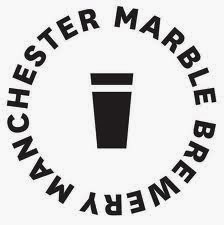 Can a small brewery lose three of their star brewers over  a relatively short time and still be on top of their game?  Chances are they can't.  Nothing much has been written about it, but over the last two or three years or so, Marble, one of the most acclaimed breweries around has lost Dominic Driscoll, Colin Stronge and James Campbell.  Has the beer suffered?  Well I'd have to say "yes" - at least as far as the last few months go. Recent visits have found the beer to be distinctly lacking in the usual Marble character, with Pint being almost unrecognisable and Manchester a different tasting beer altogether.  On a recent visit, as I sipped my beer tentatively, a lass beside me asked if I was drinking Ginger Marble. I said I wasn't.  "Just as well" said she. "There's none in it!"

The beers just don't seem as well put together. Though not bad beers at all, they just aren't what they were.  That of course is a common cry about breweries and worryingly, it is hard sometimes to get back to where you want to be, especially if collective brewing memory is gone. Now this isn't a pop at Marble.  Brewing is an art and a science and good brewers are always very much sought after and have their own ambitions.  They move on. That's as it should be.  Recently Marble has recruited a new head brewer, Matthew Howgate, someone I've not heard of, but whose experience includes ABInBev, Molson Coors and Leeds Brewery. It may be that Matthew will produce a complete new set of beers and maybe that's fine too. Brewing doesn't stand still and while we all loved Pint in its best known incarnation, there may well be something different and even better to enjoy. You don't have to stay the same to be good, no matter how good you were.

From a Manchester point of view, I would like to see Marble continue to be recognised widely as one to seek out, but I'd say Matthew has a hard act or two to follow. I wish him luck.

Strangely (or not actually) the darker beers suffer less. Brewing good pale beers is that much more difficult. There is nowhere to  hide.
Posted by Tandleman at 09:30

Already removed them from the premier league. You do get the impression that their time has passed.

Given the lack of comments, you may well be right!

the aged Chocolate Stout and Bennetts' Progress were sensational before Christmas. Like Utd, the changeover period might be a little rocky - sure it'll come good

Yes, the new man arrives on 26 February and his furst beer will be "Spring" apparently.

Yep - some act to follow. I don't get enough draft marble over this side of the pennines to comment, but the bottles have lost a little zip, for sure. But hey, let's see how he does!

Been thinking the same.Something seems to be missing.Have dropped out of my must drink brewers list.
johng

I will put in a word for the aged Chocolate Marble, which was more like the old stuff (possibly because it was the old stuff...). I had what I guess was a saison - La Petite Toulousaine - which was much less successful: clean, crisp and sharp in the right way, but with an overlay of smoky dead-leaves hops which didn't really harmonise. OTOH, the unbalanced flavour and the excessive hops didn't immediately make me think things had changed!

While I've certainly had similar thoughts, was in the Beer House this evening and the Pint was very good and the Lagonda excellent.
Would also support Phil in that the La Petite Toulousaine was very drinkable - not spectacularly memorable but just right.

That's not to say that I've always plumped for the Marble beers - tended to go for the guests as first choice.

Thanks for the constructive criticism and good wishes in your blog about Marble. As a blogger with both local and national reputation, we would like to invite you to a beer tasting with our new head brewer, Matt. We can also discuss the issues you raised in your article. I would like to give Matt some time to settle in and find his feet so how does somewhere around the end of March sound ?
Jan Rogers

Thanks for your very positive response and your invitation. Sounds great. Hopefully see you at MCBF too?