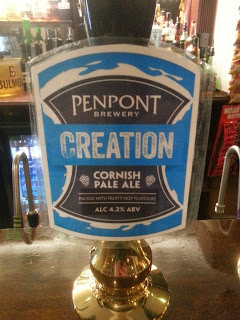 I've had some bad experiences with Cornish beer, so perhaps unfairly, I tend to regard them with more than a bit of suspicion. I have a mental vision of them as mostly brown, with lots of odd tastes. Still, I do try them when I see them, as deep down I believe it can't really always be so, even if unfamiliar beer is sometimes enjoyed more in the journey than the arrival.

Last night at our CAMRA committee meeting in the Good Beer Guide listed  Flying Horse in Rochdale, there was a reasonable choice, though it turned out later that TT Landlord was really rather poor.  Bland, lacklustre and a big disappointment, which I'll come back to.  I felt adventurous, so no taster, no halves, straight in with a pint from a brewery I'd never heard of.  Based near Bodmin Moor, Penpont Pale Ale from the brewery of the same name was golden, 4.2%, clear as a bell and had a good malt base, some light fruitiness and lots of leafy and resinous hops.  The brewery notes say "subtle oak and vanilla" - but (thankfully) not in the samples I had.  Instead it was a lovely drinkable beer, with enough hops to keep me going without becoming overwhelming.  Most of us switched to it.

Looking at their website, Penpont brew an interesting enough range and I'll certainly try them again if I come across them.

Inevitably the beer ran out, so I had a pint of Taylor's Landlord.  Looked great, had great condition, but just seemed green and dull.  I reckon that's one you need to keep in the cellar for quite a while before serving no matter how bright it is.
Posted by Tandleman at 15:22

Why don't you do your beardy committee do dars at places where you like the grog?

Landlord does seem to suffer more than many other beers from poor cellarmanship. Best avoided in a Punch pub 200 miles from Keighley.

I do wonder about it these days.

We found Landlord a disappointment on Sunday. Clear as bell, in good condition but didn't have much taste. Greene King IPA in the next pub was a vast improvement!

Bottle and cask are both usually quite good from Penpont in my experience.

Landlord can still be an excellent pint, but it does seem to be easily spoilt.