The choice wasn't to any of our liking last night in the Regal Moon.  Nothing seemed to appeal, or was just too strong for midweek supping, even at bargain basement prices.  Seemed some of the Christmas stock was being wheeled out too, with an unlikely looking pumpclip complete with Santa in all his finery.  Talk about the ghost of Christmas Past. So what's a man to do?  While my companions tucked in to Old Hooky, which was judged much better than expected, I chose the dark side. 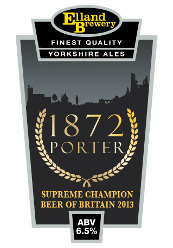 Acorn Old Moor Porter is an old favourite in the Regal Moon and deservedly so.  Rich and satisfying, with good mouthfeel it was just the job on a wet Rochdale night.  I stuck with it until my last pint when the siren call of pre-bus pint Elland 1872 Porter beckoned.  For those that don't recall, this is the Champion Beer of Britain and for once (controversial) a worthy winner.  At a hefty 6.5% it is my "one for the road" beer here.  A word too about the continual appearance of this beer in the Regal Moon, as this could be considered to be a bit of a coup.  Well Manager Chris has had this beer on for years when it was champion of nothing at all, so he still gets supplies for his support. Rightly so. I won't describe the beer to you, except to say it hides its strength very well as you drink it, but gives you a lovely warm glow as you head for the bus.

So there you have it. Two tip top porter beers to recommend to you. Trust me on this.

Of course to get the full effect, these beers need to be fully conditioned, served at around 12°C and served through a tight sparkler to produce a lovely creamy head. Anyone tells you different, don't believe a word.
Posted by Tandleman at 12:13

These two are my favourite UK porters - not just because they are from this side of the pennines. Both remain hugely, hugely influential over here and still gather in awards today, despite the advances of younger turks edging in. Dave Sanders - who originally brewed 1872 - is now brewing at Saltaire after a stint at Kirkstall, so perhaps see if another quality porter shows up there? Glad to hear you've got a regular flow of it, anyway - your man Chris knows his stuff.