Actual Artifacts from the Actual Nineties


I read with interest Boak and Bailey's blog here about a range of ales produced by Whitbread in the nineties.  They concentrate on Colonel Pepper's Lemon Ale and while I remember it, it was as B&B say, one of many special ales produced at that time to increase interest in cask beer.  Collectively they were called "The Cask Connoisseur's Challenge". I drank them in the Dusty Miller here in Middleton when it was a Whitbread pub run by a mate of mine, Charlie Ashton. 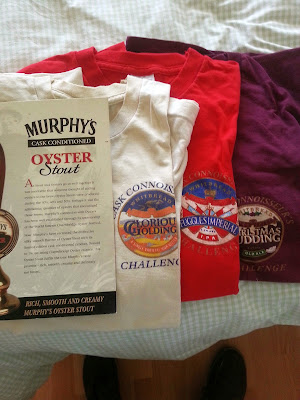 Charlie then was a cask man and Whitbread were pushing cask. The Dusty became a cask ale house of some sort - there was a brand which I don't recall - with guest ales and of course, real ales from the Whitbread empire.  I know they sold cask Trophy and Chester's Mild and Bitter as staples. I was an eager customer and remember drinking the beers, but not only that, when the beers came out, you could acquire (I'm not sure how exactly) T shirts to go with each beer.  Charlie told me not to worry about such qualification as was deemed necessary by his bosses and that he would "Sort me out."  When the promotion ended, Charlie presented me with a carrier bag full of T shirts representing each of the beers.  Over the years the T shirts have slowly but surely died a death, but I still have three, pictured on this blog, as well as a show card for Murphy's Oyster Stout. That was bloody good stuff too.

Of course the T shirts don't fit me any more. Wonder why I haven't thrown them out?  You'll also be glad to know, nearly 25 years later, Charlie still manages the Dusty Miller having somehow survived pub company after pub company, as his pub pinged around between them.  It doesn't sell cask though now, but I still see Charlie around Midd now and then.

I hope B&B will forgive me hopping on their backs over this one, but hopefully this will add to the tale they tell.

I can remember the Lemon beer but that's as far as it goes. Can't remember at all how it tasted, but I do remember the Christmas Pudding was bloody good.

Hogshead was Whitbread’s branded chain of “alehouses”, wasn’t it?

It was Rob, but I've an idea it wasn't the only one. It might have been a hogshead but I'm just not sure. I'll ask Charlie next time I see him.

Murphy's Oyster Stout? That's a new one on me. Of course there was practically no cask beer in Ireland at the time, so I assume it was only available in the UK. I wonder if it was brewed in Cork or under licence in the UK.

Sean: In the tiniest of writing at the bottom of the pump clip it says brewed under licence in the UK.

If I recall anything, I went to the launch of this range when Twitters still owned the Chiswell St Porter Tun Room and the chief host was a certain Mr Miles Templeman. The bar was festooned with handpumps dispensing the new range of beers. (good word festooned - first saw it in a GBG entry for a pub in Reading in the late 70s where the festooning was of chamber pots from the ceiling)

Clearly I am rubbish at posting - didn't mean to be unknown!

I've got a couple of artifacts from the actual 1960s: a pair of pumpclips for Walkers Bitter and Mild from the early 60s given to me by my uncle who was a Walkers pub manager in Liverpool and Bootle.

I found an old Guinness branded t shirt in one of the cupboards in our house in Italy. Must be my dad's from years back. I might do an entire blog post on it. Just about the t shirt.

My Doris made me go through a box of old t-shirts a while back, some up to 25 years old. I've saved some, most notably Mt. Hood Beer from Portland Brewing and a couple of Deschutes ones with their original designs, like Bachelor Bitter & Broken Top Bock.

They don't fit now though, albeit for the opposite reason than what usually happens.

"My Doris"? Where do you get these expressions?

He got that one from me

Trying to keep up with the youf.

FFS - if you're trying to keep up with the youf it's yoof !

How about official Tandleman T-shirts?

I want one to show the world I'm a proper pub man, on the rare occasion I venture into one.