It Wasn't All Bitter 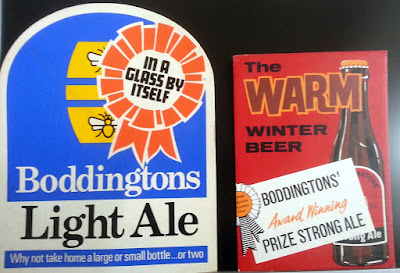 I  used to collect breweriana. That is bits and pieces associated with breweries. Ephemera if you will. While I do have odds and ends from all over, I tended to concentrate on things that were local to me or had some connection to me.

Most of my readers will know of Boddingtons of Manchester. When it was a great beer, people from all over sought it out, me included. On my visits to the Greater Manchester area long before I lived here, it was a must have pint. I have a few good pieces from Boddies, including both the old and the new signs that once were displayed outside their pubs. They are rather fetching actually.

The showcards above are pretty nice though don't you think?  They remind us that in the past, Boddies wasn't just about bitter.  Their mild wasn't that brilliant though, being a bit thin and caramelly.  I remember - none too clearly - having an afternoon boozing in the in trade cellar when they brewed mild and bitter as well as Oldham Brewery Bitter and Mild, which by then, in my opinion were better brews. Boddies had declined more than somewhat.

Having said that, it is a pity they went the way of all things rather sooner than they should have, but it was entirely their own fault. That's another story, but Charles Boddington, whose son Ewart sold the brewery to Whitbread,  must be spinning in his grave.

I'd show you the old Boddies signs too, but blogger just won't let me format them in any reasonable way and it would just look bloody awful

I used to visit Manchester a lot before the sellout and always made a bee-line (geddit?!) for Boddies pubs. And Hydes and Holts to be fair. A superb pint, and I always took a couple of those (4 pint?) Bod Cans home with me. I was surprised once when I went into the brewery bar and discovered the ex-manager of a bar I used to go to in Whitley Bay running the place.

In the 70s, I was a student at Padgate College on the edge of Warrington in the heart of Greenall Whitley Land. When the Greenalls got too much for us, we'd sometimes catch the train as we could get Boddies two or three stops down the line. It was far better than anything we could get more locally.

My friend Pete from Manchester proudly took me to see the brewery. After admiring the view, we decided to have a pint in the brewery tap right next door: "Two pints of Boddies bitter please."
"Sorry" came the reply, "we're waiting for a delivery."

Back in the 60s and 70s the place to go round here (Blackpool) for a superb pint of Boddies was the Thatched House in Poulton-le-Fylde, trouble was you could hardly get served due to the crowds,literally you could be queuing outside the door.

I remember an unfortunate trouser incident after 18 pints of Boddies at the Illawalla Country Club in Thornton Clevelys.
Boddies was always a grand supping pint.
Happy days.

You could write a book about unfortunate drinking incidents, Prof!

@RedNev
Fortunately I can't remember most of 'em !
I mean,how the hell was I having a quiet drink one lunchtime in Surrey and woke up the next day in Andorra ?
In December.
Wearing shorts and flip-flops.
That took some explaining to the missus.

Wow, I thought before craft it was bitter or lager. But there was other stuff, you say? fair enough.

I have fond memories of cask Boddington in the middle-2000's, it was still a very good beer. The houses around the big square up from the rail station used to offer it two-for-one (IIRC) for a happy hour at day's end. Good times.

A good drinking pint but all my Manchester friends were convinced that it was mega strong. Like a latter day Chester's "Fighting" Mild. Maybe it was something to do with the pubs. Boddy's pubs were often pretty rough.

I've a friend from Stockport who still believes Boddington's Bitter (3.8)was stronger than Robinson's Best Bitter (4.2).

Someone writing "The distinctive bitter is one of the strongest (by alcohol content) in Britain" in the first Good Beer Guide didn't help.