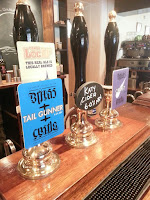 After our success at the Sun Inn, the bar had been set very high indeed. Thus it was that our first stop, while perfectly pleasant, did not reach such dizzying heights.  Rather less attractive that What Pub might suggest, The Royal Oak was anything but "bustling". In fact we four were the only customers.  Nonetheless the welcome was pleasant and the beer was decent enough, with all of us plumping for Purity Ubu which was good. John Smith's on cask was a bit of a rare sighting, but the barman was happy to chat and direct us to other recommendations in town. Can't say fairer than that.

Our next stop, the Black Swan is an imposing looking place and inside you could have filmed an episode of All Creatures Great and Small without changing much at all. Older couples in tweedy things earnestly ate roast beef and Yorkshire Pudding amid an eclectic range of knick knacks including many examples of the kind of valve radios I grew up with.  By way of astonishing contrast, the bar was staffed by three young barmaids with matching corporate style uniforms. The lasses were friendly enough, though they had to be rescued by a colleague from Inverness (she said) to sort out the over foamy beer and who chatted pleasantly while fettling things.  She disappeared and the trio of staff then lapsed into silence in what was a quiet pub.  We asked if the pub was owned by Brass Castle or the company stitched on their aprons. This seemed to confuse them, as did a question about where Brass Castle beers are from.  One actually held her hands up and said "Whoah. Question overload!" Odd, but the beer was actually excellent, even if the staff could do with coming out of their shells a little more. 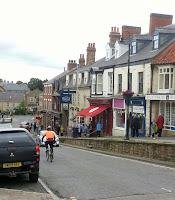 Our last call after the local pork pie shop was the Bay Horse and a horse of an entirely different colour at that.  This was bustling with locals enjoying the beer, cosy, warm and welcoming. The barmaid, as young as those in the previous Swan was clearly in charge, full of banter and confidence and enjoying herself. That's infectious.  There's a bit of an uphill slope and ridge on the way to and from the bar which most of us stumbled over giving rise to ribald comments from the locals. Clearly a source of local amusement, it was done with humour and we laughed too.  Beer was good and it was a very satisfying end to our Pickering stop.  We left amid a chorus of goodbyes.

Pickering is a smashing town, with many local shops, decent pubs and is very welcoming.  Don't hesitate to go there.

By and large all the pubs in North Yorkshire were friendly and had warm welcomes. That was err... welcome.  It really does make a big difference and it doesn't have to be a long conversation. A smile and "hello" will do.
Posted by Tandleman at 12:02

Any of these places using autovacs? Need to put them on a list if so.

Brass Castle are from Malton, I only remember it as it was the stop nearly everyone piled off at on the train to the members weekend at Scarborough and wondered what on earth were we missing :) ,but hadn't picked up they had moved into pubs (beyond Malton) yet though it's the next obvious step