Drinking on the Home Front


Most of my readers (if I've still got any) and Twitter followers - I have plenty of them -  know that I don't really drink at home. I like to drink in the pub. Any pub really, but of course I do have favourites - my locals.  Places where I go quite often.  I've always been that way inclined and in fact wrote about it here, a long time ago. In these local pubs, I know enough people to be recognised by and to speak to. People who call me by my name, shake my hand when I come in and who I know by name in return. It makes me feel part of something. On the other hand drinking at home seems rather furtive somehow. Something I somewhat unreasonably feel you do not because you want to, but for reasons of finance, domestic arrangements or whatever, though of course, I freely admit, many must do so simply because they like it. It is how they drink. But it isn't really me.

Friday saw five weeks since the pubs were told to close.  Have I missed going out to the pub? You bet. I miss the simple fact of deciding to "go for a pint".  I miss my Sunday sessions in the Tavern with my pals, the banter and just being there. And I miss cask conditioned beer of course.  But I don't believe in wearing a hair shirt.  I've been drinking beer at home. Given that on the whole weather has been fantastic, I've enjoyed a different kind of beer o'clock. Around five in the evening E and me have had a beer or two in the sunshine in our garden. Not every evening, but certainly most if the sun is still shining.  We have had to wear fleeces on the odd occasion and once, given the rather spiky wind that generally accompanies sunshine in the Grim North, we reinforced our outer apparel with blankets.  We have remarked, like everyone else, about the perfect blue skies, the absence of vapour trails and aircraft and enjoyed the birds singing. Not so much though the whirring sound of  wood pigeons, but you can't have everything, can you? 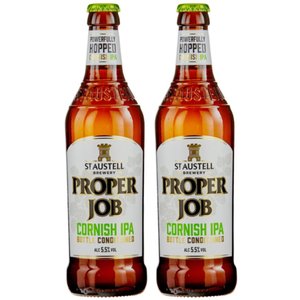 It has been good to sit in our unusually tidy garden and I have enjoyed the togetherness. It's just us, with the odd word here and there with a neighbour, but what do we drink? Well, for me, predominantly, it has been bottles of St Austell Proper Job.  Bottle conditioned, but with the tiniest of sediments, it has been ideal. At 5.5% it is a tad hefty, but it isn't over gassed and after two of them, I find that will do. E has been drinking German lager. Warsteiner for its bitterness, but sometimes Krombacher. Both well-made and easily available.

Normally if I'm in a supermarket, I pay little notice to the beer aisle. Naturally, from time to time, I do have a nose at what's around, but I don't study it in detail.  Now it is different and the first thing that strikes me, is how bloody cheap it is. My Proper Job is currently £1.49 for half a litre in Aldi, while I have discovered too, that 660ml bottles of decent German lager are now a thing. Who knew?  Not me for sure and at 3 for a fiver, it is certainly priced to go. Even with an accompanying bag of crisps-  or whatever - it is as cheap as chips to drink at home if you buy it from the supermarket and mostly, for most people, why on earth wouldn't you?

Now I know that it is good to support local breweries - and I do by buying my weekly treat of a 5 litre bag in the box of re-racked cask beer from Pictish Brewery in Rochdale. The lion's share of that gets supped every Friday afternoon and evening, with two or three pints for the next day. Served by handpump, there is a little wastage from the line, but it is worth it to support a local brewery and to get a cask conditioned pint. That, next to the people is what I miss most.

Reflecting on all this, one of the things that worries me, is that perhaps even more people than already do, will realise that there are huge savings to be made in drinking in the ease and comfort of their own homes.  I worry that drinkers will get used to it and used to the savings. The longer this goes on, the more the pub drinking habit is compromised, particularly if the return to pubs opening brings with it restrictive practices that make pub going a far different experience to that which they formerly enjoyed. Added to that is the cumulative effect on disposable income as the lockdown continues.

Habits once broken are difficult to re-establish.  Pub going as we know it will certainly be different for a time at least and maybe forever for some.

There are many other aspects of this to be explored. Hopefully I'll do that soon in future posts.

Other beers I have enjoyed at home are BrewDog Lost Lager, Thornbridge Jaipur (despite the daft little cans) and Sierra Nevada Summer Ale left over from last year. I've still got some interesting stash stuff to tackle too.

Surely people are well aware by now of the price differential between pub and supermarket. But a pub isn't just a beer shop - you're paying for hospitality and companionship.

Had a couple of bottles of the St Austell myself on Saturday evening. No sediment at all as far as I could see and a very decent bottled beer. Followed it up with some kiddie cans of Bad Co., Vocation and Brewdog.

Mudgie. I'm just pointing out that things will be difficult. I do expect many pub goers will be back like a rat up a pipe, but given where we are we will have a rocky road ahead.

But will the TAND ever return?

I refer you to my rat up a pipe remark.

I suggest that you're unusual in not having spotted just how cheap beer is in supermarkets and off-licences. You can buy 24 (440ml) cans of Fosters in my local West London offie for £24. Not that I would, or you would, or anybody we know would, except C. Lager of that ilk. Pubs have already been struggling against that, and I don't believe the lockdown will make home drinking more attractive in future.

As I have said before I was and am completely aware of the difference in pricing and have written about it in this blog in the context of pub drinking.

The point I am trying to make is that as someone who does drinks in pubs but is "forced" to drink at home, thst the price and quality of what is on offer gives me greater insight into the issue.

You don't have to drink Fosters. You can drink good stuff cheaply and while price matters little to me, it may well do to many others.

I hope you are right in.your final sentence but it will be a long time before we can go to the pub as before. I hope that turns out in favour of pubs, but it certainly isn't a foregone conclusion.

Oh, I'd say there's a substantial overlap between buyers of slabs of Foster's, and enthusiastic pub drinkers. It's not an either/or thing.

I was born HIV positive.at the age of 16 I lost my mother because of the HIV infection And I regretted why i never met Dr James who could have cured my mum for me because as a single other it was very hard for my mother I came across Dr James and his herbal exploit online about how he cured all kind of human diseases like Chronic pancreatitis, HIV/Aids Herpes, Parkinson, Asthma, Autism,Copd, Epilepsy, Shingles, Cold Sore, Infertility, Chronic Fatigues Syndrome,Fibromyalgia, Love Spell, Prostate Cancer, Lung Cancer, Glaucoma., psoriasis, Cirrhosis of Liver, Cataracts, Muscular degeneration, Infectious mononucleosis., Cardiovascular disease, Lung disease. Enlarged prostate, Osteoporosis. Alzheimer's disease, psoriasis,
Dementia, Breast Cancer, Blood Cancer, Colo-Rectal Cancer, Love Spell, Chronic Diarrhea, Ataxia, Arthritis,Amyotrophic Lateral Scoliosis,Fibromyalgia,Fluoroquinolone Toxicity
Syndrome Fibrodysplasia Ossificans ProgresSclerosis, Weak Erection, Breast Enlargment, Penis Enlargment,Hpv, measles, tetanus, whooping cough, tuberculosis, polio and diphtheria Diabetes Hepatitis and Cancer I was so excited but frighten at the same time because I did not come across such article on the internet then I contacted Dr James on his {EMAIL drjamesherbalmix@gmail.com}. I also talked with him on {what's app +2348152855846} he tells me how it works then I told him I want to proceed I paid him so swiftly Colorado post office I received my herbal medicine within 3/4 working days and I used the herbal medicine as he prescribed for me MORNING AND NIGHT and here living healthy again can imagine how good use men to manifest h and powerful DR JAMES HERBAL MIXED MEDICINE works I'm writing this article in appreciation to thank Dr James and to let you all know there is a cure for HIV/AIDS.THANK YOU