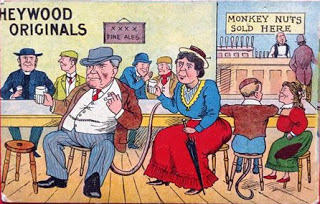 There are two Sam's pubs in Heywood, so one Saturday, long before lockdown was even thought of, I felt like resuming my Sam's Odyssey and Heywood, being ten minutes away, fitted the bill nicely. Now Heywood is known as Monkey Town for reasons somewhat unknown, but speculated on. I turn to Heywood's History site for enlightenment and two explanations are offered.  I rather like the one with a pub connotation of course, whereby folklore had it that Heywood men used to have tails, and so the stools and benches in the town's pubs had holes in them for the tails to fit through. The reality, the article concludes, is that the holes were there for carrying the stools. Hmm. I'll reluctantly rule that one out then, but the same piece surmises that the nickname ‘Monkey Town’ is derived from the pronunciation of Heap Bridge - a local area - as ‘Ape’ Bridge, and probably dates from the 1840s-50s. Not quite so much fun, but let's go with that.

My first port of call was an old haunt of sorts. I used to go to the Engineers Arms quite often when I first moved to this area and liked it a lot. It is one of the few Sam's pubs in my area that sells cask beer and is a neat little pub of considerable appeal. Alas, it didn't appeal quite so much on this visit, as it was firmly closed. Not tinned up or boarded up, just looking like it hadn't got round to opening that day. No signs to indicate why.  So one down, one to go.

The other pub, the Grapes isn't far away, but with the vagaries of the roads and my uncertainty about exactly where it was, it took me longer than the four minutes my Satnav suggested.  The pub sits in a kind of island with a large car park and is surrounded by housing, so a good prospect? The pub is red brick built - like a scaled up outside lavvy - and there is a light over the door and it appears to be open - so in I go.  Inside a spartan looking bar counter faces me. There is one guy standing at the bar and a couple sitting on stools facing the bar. Behind the bar a woman looks at me uncertainly. There is a sort of question mark in the air. Is the stranger here for directions perhaps? I scotch that idea by ordering a pint of Taddy Bitter. The barmaid is pleasant and my bar companion gives me an uncertain nod. They all resume what they had been doing, which seems to be nothing at all. 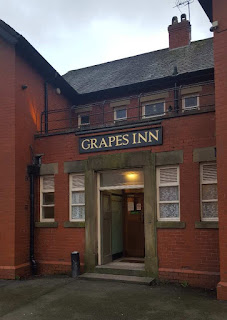 I observe the pub. It looks like it hasn't changed since the thirties. It has an odd little entrance and the gents, facing the bar, also has, well an odd little entrance. To my left is a partition and I can hear the thud of darts and some mild effing and jeffing. There is another room to the front with nobody in it. The whole place is clean enough, but it looks shabby and sorry for itself. You could have filmed a 1930s period piece here without changing a thing.  (Well, you'd have had to take the Sam's notices forbidding more or less everything down, but otherwise, not a lot to change). It was devoid of any decoration or ornaments, which gave it a rather sad and dejected feel.

For want of something to do, I look in the room with the darts players and two middle-aged lads are happily throwing arrows and doing their best to put each other off.  Returning to the bar - two steps away - I sip my pint. There is only Taddy Lager on draught as well as my beer, which is both cheap and pleasant. Then, from an unknown area behind the bar comes the unmistakeable sound of someone whistling, bizarrely and somewhat astonishingly, "Scotland the Brave".  The whistler (the landlord it seems), nods to the landlady, who swaps places and disappears. He sets up his stall by rearranging the sole decoration on the otherwise bare gantry. That is, he adjusts the packets of crisps to his better satisfaction.

Things hot up. The sitting couple have a conversation about the inadvisability of wearing gumboots when you have flat feet. The guy at the bar is consulted who agrees. It all gets really going after that. I've become a part of the furniture and nobody bats an eyelid when I order a second pint. The barman warns the darts players about swearing, which is met with the sort of derision you might expect. Two more people enter, then a third, who defying the strictures of no mobiles, consults his phone silently before suddenly rushing out and disappearing for a good fifteen minutes. Everyone knows everyone else as you'd expect and the next few minutes are spent as they enquire of each other and the whereabouts of this one and that one. They conclude that their absence is because everyone is skint. Then Rochdale people are given short shrift in very pejorative terms, joined in by shouted agreement from the darts player beyond the partition. The third man returns and resumes his lager. Nobody talks to him, but suddenly a few minutes later it is clear he is a local as well, as the discussion moves on, and he chips in.

My bar companion eventually turns and looks at me and I ask him about the closure of the Engineers Arms.  Been closed since before Christmas it seems. I consult the landlady who has silently reappeared and swapped places with the landlord. "The curse of Humphrey?" I offer.  Shrugs all round, but I'm guessing it is. There is one final surprise. From the other side of the pub in a room I didn't nose in, comes a woman.  She greets her fellow denizens and then with a silently ordered half pint of lager in hand, disappears back into her lair. Was she alone? Who knows?

You know, I kind of liked this place. The people were enjoying their own company in their own way. If they resented my intrusion into their world, they didn't show it.  And it is their little world and none the worse for that. I'd love to see it in full swing, but then again, maybe I had.

I do worry that this pub may suffer a bit with the current closure of pubs and the Engineers will no doubt still be looking for a new manager.

And yes, it was gumboots, specifically that was talked about. Not wellingtons, but gumboots.

The Grapes is a full entry on the National Inventory, of course. I've always been a bit disinclined to take a look, though, because of the "what's he doing here?" factor. It's not a pub that any casual customer would just chance on. Do you think that maybe the whistling of "Scotland the Brave" was an oblique comment on your presence?

Something I find intriguing is the very limited selection of draught beers in many of the Sam's pubs you visit. All the ones I've been to over the past couple of years have a pretty wide range, although maybe they tend to be more high-profile than backstreet pubs in Rochdale.

The Scotland the Brave thing was bizarre. The only words I spoke were "Pint of Bitter" and ghere was nobody that could have interacted with the whistler. So no. Just a peculiar coincidence I reckon. But it was odd.

It was going just as strongly in 2017 when I visited Peter.