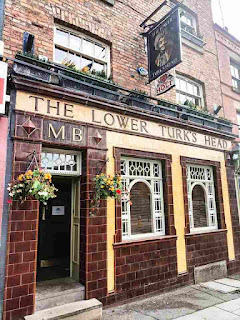 I had a couple of pints with an old mate of mine yesterday. As this was to be an uncomplicated affair, we met outside the Lower Turk's Head in Shudehill, at my request. You see, I rather fancied a pint of Joseph Holt's Mild and there it is sold. Now the LTH is a fairly recently acquirement by Messrs Holt, and it has been done up rather traditionally, and rather well too, in my opinion.  Of course, such makeovers and purchases must be funded, therefore it is by no means cheap by Holt's standards. In fact, a pint of mild was a rather pricey £3.95. This for a 3.2% beer. Oh, well. The weather was decent enough and as we supped and chatted, we watched the comings and goings of the bus station opposite, and the many passers-by. The beer was in excellent condition and the outside eating conducive to contentment, so to even things up, we had another.

Now just a few doors away is the much adored Hare and Hounds, one of the finest traditional pubs in Manchester.  No mild on there, but Joseph Holt's fine bitter at a mere £2.90 a pint. A not unwelcome saving of £2.10 a round. This was in even better nick - in fact remarkably so given that the mild earlier was no disappointment, and we enjoyed a few pints together in the company of a fellow CAMRA worthy of our long-standing acquaintance, who had just popped in for one.  Service here is swift and friendly, as indeed it was in the LTH.  Now, what point am I making? I'm not really sure, but I suppose it is that a quirk of free versus tied trade pricing, allowed us to drink Holt's beers much more cheaply than in an adjacent Holt's house.

So which did I prefer? Beerwise? The Bitter was superb and the Mild not far behind. Pubwise? Well, possibly the Hare and Hounds, as it is the kind of pub that is all too rare these days - a simple drinking house - unchanged, and none the worse for that - even on an afternoon sans geriatric cabaret.* But don't let the price put you off drinking Holt's Mild or other fine Holt's beers in the Lower Turk's Head.  It is all good stuff, and it's a smashing pub in its own right.

In fact, go to both. You won't regret visiting either one.

We watched some shocking and blatant littering too. Some Manchester citizens should be ashamed of themselves. My companion shouted at them to no avail, but at least nobody stabbed us.

Factoid. Within a five-minute walk from there, you can sample beer from all Manchester's large brewers - Holts, Hydes, Lees and Robinsons.

I love your positive posts. Peter. These two pubs, and the Angel and City Arms etc etc. are why Manchester is so great.

Went in the Lower Turks a month or two back and enjoyed their Cherry Dark and the female banter enormously.

As you say, do both.

those cask prices are way too cheap for cask to be a sustainable product. you guys gotta learn to appreciate cask and pay more.

When I visited these two pubs last Autumn I thought the LTH somewhat lacking in atmosphere as if it hadn't quite worked out yet who it was appealing to. Maybe in the intervening months it's found its niche.

The H&H as ever is like a local in the city centre.

The LTH can be extremely busy or dead quiet in my experience. You may have a point.