Banging on for Years 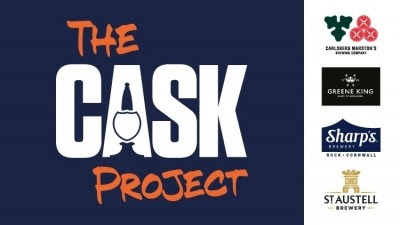 The Dear Old Morning Advertiser published an article today about one of my favourite subjects.  Keeping cask beer.  It referred to Greene King joining in a campaign to re-instate cask beer to its rightful place as a unique product.  The article was part of a MA initiative called the Cask Project,  "a bid to re-energise the category and reinstall it in pride of place on the bar of pubs throughout the country."

The MA goes on to say that "Cask beer is in long-time decline and, having joined forces with some of the UK’s leading cask beer suppliers – Carlsberg Marston’s Brewing Company, Greene King, Sharp’s Brewery and St Austell – we want to reinvigorate attitudes within the trade to a product which should be rightly cherished by operators." All well and good, I'd say, though they seem to be aiming this campaign at younger drinkers, who are on the whole distrustful of the product, no doubt through bitter experience of getting a bad pint and being put off for life. The points made and the laudable aims however really do apply to all us cask beer drinkers, whether callow youth or grey haired old devotees.

Now, getting further into this project of good intentions, I was very disappointed to read a rather scant set of tips to keep cask better in the pub. This, by St Austell's Trade Quality Manager, has either suffered from an over vicious edit, or is just not sharp and detailed enough to be of real use. Moving on, I won't go into too much negative comment about premiumisation, except to say that cask beer to be at its best, no matter how good the cellar  keeping is, depends almost wholly on turnover. Assuming the beer is presented as it should be,  that is the key to cask success, and it can rarely be achieved by charging top dollar for a product often served at less than its best.

One thing from Greene King's new head of brewery customer engagement, John Malone in today's piece that I thoroughly agree with though, is the statement from Greene King that "Younger drinkers aren’t choosing cask and if we can’t guarantee there’s a 99.9% chance of getting a perfect pint every time then we’re not doing ourselves any favours."  With the proviso that it applies to all of us drinkers, well said. Happily, I can report that the rest of his article which can be read here is brimming with good stuff.  I was particularly struck by the fact that new Greene King licensees are all given a comprehensive cellar management course - I wonder if the existing one are -  and the general good sense contained in the article. Logically, you now know that if you get a duff pint in a GK pub, you can refer the case John Malone.

Finally, in this unusual peon of praise to Greene King, can I commend to you one final thing. John says; "I think there’s a perception that cask is a really difficult product to keep, but that isn’t the case. There can be a few key things that can lead to less-than-perfect quality pints being served over the bar, but if you get the basics right, it really isn’t that hard at all."

Exactly what I have been saying for years. Just have a look through blogs passim for evidence of that.

I really hope that GK and the others supporting this initiative carry on with what they are doing.  Such a campaign needs ongoing support.

Absolutely - there really is no substitute for turnover, and if you haven't got that there's nothing you can do to serve up a good pint.

Now you are just trying to be funny

Bob Thossett? CAMRA member, I presume? I've found a lot of them seem to be a bit bigoted when it comes to Greene King. I used to frequent a Greene King pub. The landlord and main barman both went on a cellarmanship course at Bury St Edmunds. You'll have a job finding a better pint than in his pub. That's why (despite the local CAMRA chairman saying "as long as I'm chairman, no Greene King pub in this district will ever be in the Good Beer Guide") it's been in the GBG for the past 6 years.
- Brian (I don't like to comment as Anonymous but for some reason I have great difficulty signing in with my Google account and then commenting)

One of the reasons many craft brewers chose the keg route was to have control over quality. For all the banging on about improving the reliability of cask, little is achieved.

Yet another initiative? I wonder why all of the previous ones failed? I wonder why the erstwhile consumer campaign for the product doesn’t appear to have much luck?

As for Bobby, his opinion is common among the CAMRAs. They like obscure microbreweries regular people have not heard of. They dislike anything resembling a national brand and find it bland. They particularly dislike Greene King due to, I think, a wave of takeovers and brewery closures. Many use the name “Greedy Kerching” for the company. That a reliable product may naturally form a recognised brand among consumers remains lost in the pursuit of their beer hobby.

Cask remains a product you’d only drink in a select set of outlets and swerve in the majority of regular pubs. My rule of thumb is look around and if no one is drinking it, swerve. If you like it, go to your local camra micropub and join the beer sniffers.

Actually had two pints of the best Black Sheep Bitter I'd had in years on Thursday in The Liver in Waterloo (Liverpool version). To add to the surprise The Liver is a Greene King Hive pub!

The MA have obviously put a lot of work into the Cask Project, and deserve our commendation for this. Having said that, there is an lot information to wade through, and inwardly digest.

Unfortunately, despite all the good work that the MA and the brewers supporting this initiative are doing, the arguments put forward by everyone's favorite protagonist - Cooking Lager, do hold true in quite a few instances. For example, the preference of many CAMRA members for obscure microbreweries, doesn't help advance the overall cause of cask, although I wouldn't go so far as agreeing with his last point, about always having to swerve cask in an unfamiliar pub.

In addition, I wouldn't dismiss this project, as he has, as just another initiative. Without these initiatives the pub trade wouldn't have moved forward in the way it has. Think of cellar and line cooling, as just one such initiative, and cast your mind back to the late 70's/early 80's.

You wouldn't have gone anywhere near cask back then, if temperatures had even approached today's record-breaking highs - not unless you fancied being served a pint that looked and lasted like warm soup! With modern cellar practices, such horror stories no longer apply - and this is just one example.

The licensed trade, brewers and cask-ale drinkers all need to get behind this initiative, and I am including all members of CAMRA here. The latter group also need to focus their energies on supporting those pubs that sell a limited range of cask well, rather than those with a vast range, where an optimum period of turnover per cask, is totally unachievable.

I am not a CAMRA member, never have been, or intend to be

I like to be addressed as Bob or Robert. Not Bobby that is a dog's name

Just too many bad experiences with Green King over the years

I wouldn't build your hopes up. Greene King managers are instilled with the belief that cask beer will last for seven days and are very reluctant to contradict that because of the potential effect on their stocks. This is clearly evidenced in my local GK pubs that have too many cask beers despite decent overall turnover, with the inevitable swift drop in quality.

I don't doubt it, but you now know who to contact about it. 😆