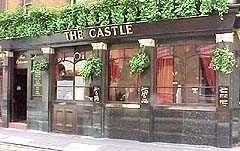 Yesterday I had an appointment to meet my fellow beer blogger Stonch. We had agreed to meet at the Old Mitre in Hatton Garden. I noted that I would have to pass the Castle in Furnival St, which I had visited before and liked. It is a neat, large windowed free house, owned by the Red Car Pub Company. At lunchtime it was pleasantly busy, the crush being alleviated by those drinking outside due to the unseasonably warm weather. Now for a little bit of social commentary; I am always amazed that lunchtime drinking in London is as intense and popular as it is. It scarcely exists elsewhere, with puritan American work ethics wiping it out, but here is goes full tilt, with suited lads and attractive lasses, knocking it back for fun.

Back to the pub. There was a fair range on offer, but I observed that contrary to our Northern free houses that are dominated by pale and hoppy beers (hooray), the dominant feature here was brown and boring. Well that's on the face of it. In fact of the three beers I tried, one, Empire Longbow, was not very pale, but was hoppy and very clean. A good beer. Not so the Hampshire Taste of the Dragon which was brown with an odd smoky taste which I'd normally assume to be a brewing fault, but given the beer name, was probably intentional. Let me tell you this Hampshire - it doesn't work. The beer was awful. Lastly I tried Harvey's Porter. This had slight liquorice and was malty sweet. Not a bad beer, but no classic.

The landlord who was a pleasant sort had a chat with me. I remarked about the lack of pale hoppy beers. He pointed out that I hadn't tried one which was on - I hadn't as it was a beer I knew - and of course it was a kind of luck of the draw thing. Forthcoming beers were more to my taste.

Overall I rate this pub quite highly. It is well run, is very clean and it has a good choice of well kept beer. I'll be back.
Posted by Tandleman at 08:34

All the Hampshire beers I have had (in bottle of course) have had an awful grain astringency issue, with burnt kettle burnt plastic notes, also a high level of oxidation. I suspect there are some issues with there kit.

I usually avoid their beers, but I suspect you are right. Benefit of the doubt withdrawn!

Lunchtime drinking is still the norm in lots of workplaces but it would soon get you sacked in others.

Last night I was talking to barmaid who works in a city pub. She serves a chap they call Cider Pete. He comes in every day and drinks three pints of cider (Strongbow or somesuch) for lunch. He returns at 5.30 and drinks another eight pints. He always drinks 11 pints, apart from when the football's on. Then he gets excited and squeezes in 12.

The landlord at the Castle is called Alex by the way. He plays the quiz machine in his own pub. I find that a little odd but otherwise he seems sound.

Maybe Alex watches the machine and only plays it when he has observed it being played a lot but not paying out? They operate on a percentage payout.(Or is that just fruit machines?) Maybe he just thinks he can buck the system?

So the implicit truth of one's answers varies according to the percentage of truth expressed by previous players?

Quiz machines by Jacques Derrida: London really has everything, doesn't it?