Back in the Past 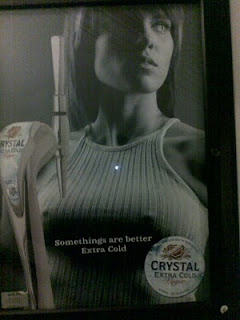 I spent a couple of hours drinking Joseph Holt's beers with retired Gas Board men yesterday. My mate Steve has an ex gasman's pissup every Christmas and occasionally, I pop in to see the old codgers, who all like their ale. The choice of pub is fixed now, It is the Ape and Apple, a rather nice old fashioned (though it isn't that old) Holt's tied house in John Dalton Street. After some rather haphazard Christmas shopping and finding my way out of the Arndale with great difficulty, I met up with them. Most were drinking mild and all were standing up, as befits men of their drinking seniority. They are of an ilk where you sup your beer on your hind legs, a position favoured by most of the customers there.

It was a bit of a throwback in many ways and if you want to get the feel for how drinking was in the seventies and eighties, I suggest you go there. No music, just laughter and banter, mild and bitter flying out from the wickets and a couple of truly excellent (and pretty) barmaids handling it all with consummate ease. A pleasant couple of hours were spent and I left with reluctance having switched as you do, from the excellent cask mild to the very good bitter after a few.

It was one of these occasions where you weren't being a beer geek, just a guy drinking straightforward good beer with pleasant company, in a great boozer. Trust me, that's still worth doing.

On the way to the bog I spotted this rather old fashioned, or sexist, or whatever advert for Holt's lager. I thought I'd share it with you.
Posted by Tandleman at 09:11

I guess the ad agency had a tough call choosing between this charming image and the other they'd commissioned of a shrivelled male member and withdrawn reproductive sprouts.

Must've been a hell of a meeting.

Classy. I like it. Mind you, it would take something special to tempt you to drink Holts lager.

I wish there were more pubs like the Ape. Loving the poster too, never notice that before!

It's just a bit *sigh* obvious.

Funny to think of the alternative, though.

That WOULD be a brave ad.

On a related point, the London Evening Standard had a front page pap shot of Pamela Anderson visiting a JDW pub (she's in the capital for a 15min appearance in a production of Aladdin). It was captioned 'Genie Pam makes every pub regular's wish come true.'

Apart, one supposes, from straight women, gay men and those - few if the headline is to be believed - not enamoured of either Baywatch or Barb Wire.

Seriously, when the pub is facing such difficulties, the entrenched view of the pub as a male bastion (which as Mudgie points out is a serious historical myth, but one believed by many women these days who cite it for why they prefer bars) is dangerous for the industry. And in this case, beer.

Plenty women in the Ape yesterday. Some were even young. Didn't poll them on the ad tho.

Nice ad. But, sorry to be a killjoy, the dimensions of the breasts and nipples concerned would indicate that they're not real.

Sorry to be honest Pen, but that matters exactly how?

Competing with Wurst on the lasses front?

Only if I find them or their likeness in the pub, not the web.

I thought a man who likes his beer real would like his women the same:)

It's my only experience and likely to stay that way, but I do, ahem, feel for others.

Call me fussy, but I'm with Penny on this one. On a warm day, a cold, crisp beer may sit nicely in the hand. But a cold, crisp ball of silicone never feels right in your hand.

In the interests of fairness, I think they should have one with a barman with a bulging trouser pocket. Even better, let's forget the trousers!

You come 'round to IGNW and I'll get you some cock and balls.

Reanna - I've had a word with Tyson. He'll discard his lower garments willingly in the right circumstances. He didn't say what these might be though.