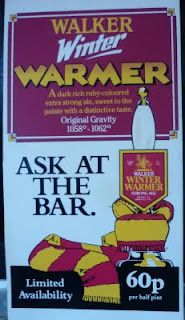 I've only had two Christmas beers so far. OK, I haven't been really trying and I promise to do better, but both have been ordinary mid brown beers of (by co-incidence) 4.8%. It doesn't augur well.

Now is it just me or am I wrong to expect a Christmas beer, specially issued for the season, to have something, well, special about it? Wouldn't you think that at a time when everyone wants to treat themselves a bit, the brewer would pull all the stops out? If they don't believe in the premise, why bother going through the motions? What do I expect? Well, something different. Maybe a mildly spiced old ale, or one with a little fruit of some sort in it - bitter orange would be good. Maybe even something dark and toasty? Something stronger and warming definitely, but not just a bog standard premium, mid brown bitter of no character or seasonality.

This isn't the first time I've raised this point, but it is still worth saying I think. Put some bloody thought and effort in please brewers. Stretch yourself and your imagination. It's only once a year after all.

I first complained about this in the early days of my blog, two years ago. Post number 21 in fact. It still makes a good read!
Posted by Tandleman at 11:27

Have you got a favourite Christmas beer?

I agree some of the efforts are poor, and whilst the 'comedy' labelled Christmas might make a good secret santa for someone in the office I never find myself really thoroughly enjoying them.

I sometimes find myself stocking up on old favourites at Christmas instead of sampling festive or seasonal beers.

Seems most brewers think all that needs to be done transform a standard brown ale into a Christmad ale is to give it a stipid name like "Good 'Elf", stick a bit of holly on the pump clip and Bob's your Uncle.

Mark - No I haven't actually, but I guess that's an outcome of what you come across in the pub.

I am relatively fond of Lees Plum Pudding which isn't out this year, but will be back next. It fits the bill of seasonal and different.

And, of course, cask Port Stout, traditionally available on Christmas Eve from the Marble Arch or Marble Beerhouse.

And Dom, please tell me Garrett will be getting some of those beauties??

Sticking cranberries (or cranberry juice) in doesn't count as imagination either. Ugh.

I totally agree with you Tandleman the beer should be special. I suspect many a Christmas beer is a blend of existing ales with a festive label stuck on it. Or am I being too cynical there?

Curmudgeon. No you aren't. It's some brewers that are the cynics.

Dom I'll be in next week (and before). Are we talking cask here apart from the Port Stout?

At the end of october, I was at a DBE beer fest in Esbjerg, Denmark, which saw quite a few micros roll out their Christmas beers... as you'd expect, a lot of them are of the thick dark spice soup variety.

Yet there's a welcome bit of a backlash, and a few of the breweries are steering away from the spice overkill. EMB / Esbjerg MikroBryg, for example, have come up with a splendid 6% smooth dark ale dosed with blackcurrants. Dark fruit notes aplenty, and it works really well.

On a similar approach, two of the Swiss micros to keep an eye on have winter beers in their portfolio that aren't spiced. BFM has been brewing its La MAndragore, a smooth, silky, 8% black ale, not dissimilar to a superstrength mild, and Trois Dames have come up this year with Bise Noire, a 7.2% smooth, rich yet well attenuated dark brown ale heavily dosed with orange peel and a decent hop smack to boot.
A welcome step forward from the kind of bland monsters large brewers unleash onto unsuspecting customers at this time of the year down here...

Sorry, the barley wine and Imperial Stout will only be available in 75cl cork and cage bottles, finished with a flourish of black wax.

I forgot to mention Brew 14, a new 4.3% beer mildly spiced with a MASSIVE bag of Simcoe, Chinook, Riwaka and Green Bullet. I was going to use nutmeg and orange peel...

Showing off aside, I do like the idea of an OG1060 spiced up winter warmer type beer. I'll ring round the local breweries and see what they've got. I can promise the famous St. Petersburg on from Friday 18th December however...

Dominic - Had the Brew 14 on Saturday when Pint went cloudy - we were told someone in the cellar disturbed the cask. Not as impressive as Pint on that showing, but in fairness we were in a Pint groove by then. Nothing would have impressed us by then. We wanted more Pint!

I've got a similar moan on the blocks. What I really hate is boring brown bitter with cinnamon and cloves bunged in -- bland, but with just a hint of nastiness.

It's perfectly logical to expect a seasonal ale itself (rather than just the name and pump clip) to reflect the season somehow.

I've just noticed the Walkers Winter Warmer photograph. My local always stocked WWW when it was available, and our licensee Charlie went through loads, as most real ale drinkers (and some non-real ale drinkers, too) switched to it. He apparently sold more than the next two or three Walkers pubs combined. That was a great winter warmer, and a good session beer, too.

Tandleman - that's the second recommendation for Plum pudding I've had this week, will look out for it next year.

We do get asked for "Christmas" beer. Seems odd to me, I'll drink pretty much anything at Xmas. Still, we have (had) 3 winter beers - one dark-brown blended job with xmas-related name and Chrimbo spices (eschewing cloves - you have to go so easy that they're not worth the trouble, and easy also on the cinnamon), a stronger chestnut coloured one with a touch of Melegueta pepper, and we'll probably start leaking out our 8.8% treacle stout. Good luck trying to find them.

Just had a bottle of Anchor OSA 2007. I dunno about you lot, but that's got me feeling pretty Xmassy...

Harveys Christmas Ale at 8.2% abv is my favourite, closely followed by Hook Norton's Twelve Days.
I've moaned about this on my own blog, having seen Wetherspoons list of so-called Christmas beers. I was not impressed last weekend when all our local JDW outlets had to offer was Christmas Turkey, a 3.8% brown bitter from Smiles and Escape Claus a 4.0% bad pun of a beer from Caledonian!
Brewers really do need to try much harder and stop taking drinkers for mugs.
Btw. would have loved to haved sampled Walkers Winter Warmer back in the '70's.

As a brewer and dare I say ticker I am fed up of the tide of brown spicy stuff that appears at Christmas, and they are getting more common year by year. In reponse I have brewed All I Want For Christmas is...Hops, pale and hoppy....nothing super spectacular and ground breaking, but hopefully a welcome oasis from the brown malty stuff. Tara Mallinson

What's this up above then?? I knew it was just a matter of time before some twat ripped off my tasteful nude Friday with an Asian nude Thursday. Anon is claiming they(asian nudes)go very well with Kirin Ichiban regardless of co2 environment. What's next, tracks??

Sorry Suasge, I've deleted it, so you're back in charge of nudes.

This might be one occasion when US brewers get it right. Not all the winter seasonals are great, certainly, but they are more diverse than what you describe in the UK and a lot of them are very good indeed.

They tend to be darkish, hoppy and strong and quite different from the brewery's standard lineup. Many of the winter seasonals from the Pacific NW have been around for nearly 25 years and most have managed to retain character--even when the standard beers have not.

This used to be the time of year all the local beer geeks looked forward to, simply because the seasonals were so special. It's a good thing, IMO, that this is no longer as true, because the quality of the year-round beers has improved -- not always from the "old" breweries, but in general.

Sierra Nevada Celebration Ale is still anticipated, but the brewery has shot itself in the foot to some extent by introducing a superior beer, Torpedo, as a year-round selection.

i love it... your posting is so nice thanks for sharing this with us.

They had Dunham Winter Warmer on draught at the Trackside on Saturday lunchtime and that's definitely a winter brew with plenty of character and flavour. Lovely stuff.

Years ago, I used to live near a Hydes pub and it was quite pleasant to see the annual arrival of small casks (pins?) of their Winter Ale on the bar, served from the cask by gravity. A little bit of theatre that you don't get when the Winter Ale's just on hand pump or in bottles.

It's probably not the best way to keep the beer but it never seemed to matter.