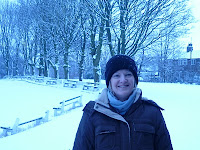 We didn't make it to our remote pub yesterday. Our Sunday table was bereft of us. E and I set off in hope of getting there though. An effort had to be made. We walked the mile or so to Midd in deep snow and snow showers and got a 17 bus, the first for a long time according to the impatiently waiting queue. The traffic was gridlocked. Rochdale Metro had not it seemed, gritted the roads. Snow had fallen on already icy roads and they were treacherous in this hilly town of ours. Cars slithered and wheels were spinning impotently. The bus took 20 mins to go 300 yards. In the meantime phone calls were received from the boys. The lane was very dangerous; Colin had gone on his arse twice while walking his dog. John had fallen too. Dave's missus had decided it was too dodgy to take him. We were stranded in Middleton. In short, the game was over for today as far as the THT was concerned. I texted the landlady to have the attendance book duly noted.

Feeling slightly cheated, we baled out of the bus, me grimacing at paying £7 for the privilege of a 300 yard journey and repaired to Middleton Cricket Club for soothing pints of Lees Bitter, then down to the Old Boar's Head for more of the same. We enjoyed the beer, but missed the familiarity of our pub, the welcoming roaring fire, the conviviality of our friends and the usual banter and conversation that we'd have had. That's why we go there, why our local is so much part of our lives. Without it, Sunday just wasn't the same.

Later we walked home, back up the hill in more snow. We just missed two 17's leaving the bus station at exactly the same time. Insult added to injury.

The photo shows a well wrapped up E outside the Cricket Club
Posted by Tandleman at 05:56

I just about managed to get up to the Tavern yesterday,it was about 12.05 when i got in and was met by the welcoming fire and a packed pub of walkers.It was a really great atmosphere and wished i could have stayed longer,but the weather was closing in again so i made a dash for it at 1.30.

Put the central heating up, bang the telly on, and open a crisp cool fizzy can of cooking. If you must, look outside at the snowy xmas scene through the window and feel warm. All the best to you Tandy, safer indoors with a can, my friend.