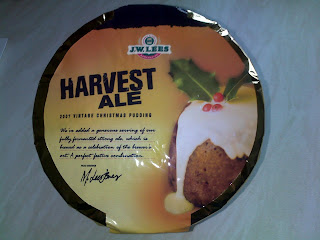 I know a lot of beer geeks go into paroxysms of hyperbole over Lees Harvest Ale, the once a year brewed strong ale (11.5%) made with the first of the new season's malted barley. It isn't widely available and is usually much sought after, particularly in the US, where some variants are also made available. Previous vintages (of which I have quite a few) are collectors items, as they all remain drinkable for many years

On a visit to the brewery last week, I was presented with something a little different - a Harvest Ale Christmas Pudding, made exclusively as gifts to Lees customers (and some others), in strictly limited numbers. This will add a touch of beery one upmanship to our Christmas Lunch and I will be fascinated to see if the taste will shine through. Should it be accompanied by a (shared) bottle of the same I wonder?

I'll let you know how it turns out of course.

I was also given a preview of Lees Christmas Cracker, a 4.8% beer, well hopped with First Gold and Styrian Goldings, but not dark surprisingly.
Posted by Tandleman at 07:26

Ah well. It was fine at the brewery. Why don't you drop them an email with your opinion, Feedback!

The usual problem arising with serving on the side the same beer that's in the dish is that the beer in the glass often - not always, though - tends to overpower the beer in the dish, and you can't really taste much of the latter.

Try it, but in such situations I like to have a plan B under the elbow. ;o)

Tried Lees Christmas Cracker at our CAMRA Christmas bash on Saturday. As reported on my recent posting, have to say that I wasn't that impressed. Sorry!!

Looks like a miss so far, but as I say, drop them an email. Tell 'em politely that you weren't impressed.

may be you are not impressed but i also think that you have to drop them an Emial.