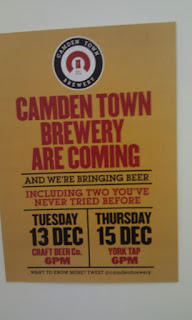 The Beer Writers Guild do was good, with decent company and some good beer. I liked the Orange Peel beer from Wadworth particularly, as did Eileen, but we could have done with a bit more of it. My pre dinner tipple was Thwaites Wainwright. Re-racked bright, but still in excellent nick and very drinkable. Thwaites are doing a lot of things right and will likely continue to do so I fancy.

The day after the do saw a nice invitation from Mark Dredge to visit him at Camden Town Brewery. Tyson and I set off in reasonably good time, but got lost and despite the good intentions of those that directed us onto various wrong buses, we made it, almost an hour later than intended. We declined Mark's kind advice to scale the fence to get in and were admitted more conventionally through a gate. The brewery is spread under a set of railway arches and is bright and shiny German made stainless steel and mostly automated, with its own small kegging and bottling line. It is all carefully fitted in to the tightest of spaces.

Beers on offer were the noted Camden Hell which was spritzy and refreshing. The Pale was lightly hopped and is apparently being tweaked at present. The two stars of the show for me however were the new stout, not yet released, so rather exclusive. Nitro kegged and very, very drinkable, with a clean, bitter taste, roasty malt and some sweetness. It should do well and of course, it knocks Guinness into a cocked hat. A German style hefe weizen, was deliciously bang in the middle of the style, while the Belgian witbier hit all the right notes. None of the beers are pasteurised, which certainly gets a tick in the box from me. The company was good too, with fellow bloggers Mark from Beer Birra,Beer making a late appearance and Fletch from Real Ale Reviews too, who seemed to materialise from nowhere, but as always was great fun to be with. They all were,  even if these lads make me feel even more geriatric than usual!

Camden are doing lots of things right. There is a dynamic enthusiasm there and most of all, the beers are bloody good. Drink them with confidence.

Thanks to Mark D for the tour and the hospitality.

I believe I was highly impressed with a Wainwright on my most recent visit...or was it on the second most previous visit? Either way, a bit amber, IIRC, but dry and crisp.

Mouth is watering. Probably helped that you were drinking these at about the freshest they could possibly be?