Another day in London and another new beer bar. Both new to me and E and new(ish) overall. Fortunately, unlike some of the new bars which involve tortuous journeys across London by bus -  trying  but interesting - Tap East is relatively quick and easy for us. A quick stroll to Tower Gateway, a change at Canning Town to Stratford International DLR, pass the new Olympic Stadium and that odd piece of sculpture and you are dropped more or less at the door. Good old Docklands Light Railway, though the TFL site tried to send us by bus, ferry, pony express and camel train, and by an entirely different and wholly inappropriate route. But I digress. 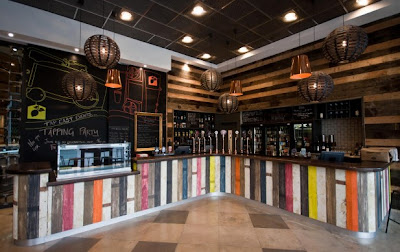 The Westfield Shopping Centre (or is it Mall?) is the destination. Out there in Olympic Land. Hop off the DLR, pass the Olympic athlete's village, go through the airport like ticket hall, look right and there it is. All glass fronted, wide open to the shopping centre (more of that later) and looking like a cross between Costa Coffee and an American Brew pub is Tap East. An L shaped bar, tables and stools, nice chairs and sofas, big windows. It is roomier than you'd think too and pleasantly laid out. Of course beer is the attraction but not being a geek, I didn't count the fonts for keg beer,  nor the handpumps, but there was certainly enough to go at and my choice of cask beer included two from the brew pub, Thornbridge Kipling and Dark Star American Pale.  I started with the Tap East Pale Ale (I think). Deeply bitter, with a good malt backbone, this was am enjoyable beer which perhaps needs a lighter more floral or tropical finishing hop adding, but was very drinkable indeed.  Thornbridge Kipling followed and was in great nick. All it needed was a sparkler to make it perfect.  There was of course, being an Utobeer outlet, a large array of bottled delicacies too.

On a Saturday afternoon the pub was pleasantly busy. Being in a shopping centre, there is a natural degree of transience about the customers. People come and go, but that isn't an issue to me, as this aids people watching, a prime pub pastime.  Downsides?  Well yes. Being open to the shopping mall on one side, makes the bar feel more airport like than perhaps a dividing wall otherwise would.  Being a bit more separate would also aid its identity hugely in my view.  The other downside is the mall's musak, which is piped in at a volume that makes it impossible to tune out for long.  The usual Christmas songs (on a one hour loop) must drive the staff to the point of distraction and certainly provide a degree of irritation for the customer.

Service was quick and friendly and despite the fact that we sat with manager Glyn, looking around, it was just as good for everyone.  We ate too; a doorstep sandwich for E and a superb pork pie from Borough Market for me. Just the type of thing you need from a pub in my view, being something substantial enough to blot up some beer without being stuffed.  Glyn brought me a sample of the stout too, but this to my mind needed more work , being brown and not roasty at all.  Talking of the brewery, this is clearly visible from the inside of the pub and is satisfyingly shiny.

Overall Tap East is a pleasant place to be in, has a great choice of good quality beer (no warm, flabby cask here), is well run with pleasant staff and very handy for Waitrose and the DLR.  What's not to like?  Get along there and try it. We'll certainly be back.

Top Tip: Avoid Westfield Shopping Centre by using the DLR. It seems the tube involves hoofing through the mall.
Posted by Tandleman at 10:14

I take it you meant Stratford International rather than plain old Stratford DLR? Might confuse those not familiar with the environs.

Stratford International DLR is often shut on a weekend so be prepared for a wander through the shopping centre. Just put your head down and head to Waitrose on the lower ground floor.

Handy for me too in GBG-absent E6 and I've always found the beers to be in good nick on my recent visits.

Eddie - I do mean Stratford International DLR. Thanks.

you can avoid the crowds by walking outside from Stratford station, past various restaurants and a few shops, and reaching the John Lewis/Waitrose/food court end where Tap East is. Just head left after M&S instead of entering the centre

Haven't been yet, sadly, but not surprised to hear that, at the moment, it's a bit airport-like. Hope that changes as it weathers a bit, as happened with Cask in Pimlico.

(Although, just as it got cosy, they've now refurbed Cask so it's all sterile again. Bah.)

You started on the J.E.B. it was originally going to be a 3.8% pale but we didn't quite hit the numbers and it turned out 4.2% and as bitter as the brewer!
Glad you enjoyed it! Great to see you both!

Thanks for the clarification Glyn. I wasn't sure at all.

I must get you a sparkler. To be kept in a glass box and only to be opened in an emergency. That is, when I'm there!