Should I Change My Mind?


I named Hawkshead Windermere Pale as my best overall beer of 2011, but I wonder if that is so now. It is still the lovely easy quaffer with a complex hop bill that made me think so, but you know, last night I had a beer - not for the first time - that sent my senses reeling. Actually, if I'd had a couple more, it would have sent me reeling too. 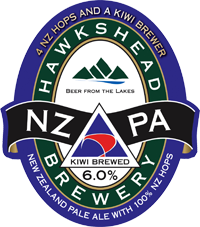 The beer is of course the one illustrated on the left. (It would have been perverse for it to be otherwise, though I did think of putting something else on to throw you off the scent for a couple of lines.) Hawkshead New Zealand Pale Ale is wonderful. It bursts on the palate with a cornucopia of tropical fruits, is bitter and citric and so very, very drinkable for its 6% abv. One isn't enough and three may just be too many, as it commands respect strengthwise, though the alcohol is cunningly disguised.

If ever a beer could be described as dangerously drinkable, this it it. So will I change my mind? No. But you know, in a sneaking way I want to.

It knocks Jaipur, especially in its current sugar sweet, enfeebled state into a cocked hat.
Posted by Tandleman at 11:28

It's a toper's prerogative to change their mind. That's why I leave my 'best of' nominations until the 31st of December.

And Jaipur "sugar sweet and enfeebled"? Has someone being slipping powders into your drinks again?

Not just me that thinks it Simon. You must have read what many respected people on Twitter have been saying. Maybe you need to take your Thornbridge goggles off and polish up your critical faculties, or somehow it has ceased to travel well?

Give it a very critical once over out of its home area.

Only tried the NZPA once which was at the Hawkshead beer-house, sadly I was driving so only managed a half and I have never found it since. A real shame as I quite agree it's a stunner of a beer.
Cheers
Phil

Sounds wonderful, and 5%+ is my favourite stength range. I doubt I'll see it my way though.

Have had a few pints at different times in the Dispensary in Liverpool, absolutely sublime.

A wonderful beer. I've drunk it in the Beer Hall a few times and it's even reached Birkenhead. I know two separate couples who will be in Staveley for New Year so the instruction will go out to bring home the new bottled version of NZPA.

I haven't had a poor pint of Jaipur for months. Maybe I just get the good batches...

As for NZPA, I wish I got to see that and more from Hawkshead around these parts.

One or two barrels have been through The Grove in Hudds and this would certainly be knocking on the door for my favourite beer this past twelve months. Hawkshead has been the surprise of the year, with this ale the crowning glory. Totally agree about Jaipur too - so disappointing of late.

And that's the ever-changing landscape of beer - and that's without factoring in context, company, etc etc.
Should you change your mind? No. It was the right call at the right time! It would be a crime to stick steadfastly by opinion formed for years and years...Beer doesn't work like that. Go ahead. Keep enjoying it. As you were.

tried a pint of this power amber last nite in the ashton (o/m) and recently had the hawshead pale 3.5% in the new wetherspoons in shaw. the later is my fave and a trip to the lakes brewery tap is a deffo for next year.

I too had just a half of Hawkshead NZPA at the Brewery, as driving, good news is that my wife has booked lodgings in Staveley for our next trip up to the lakes.