I've been away. First of all in Scotland, then in London.  More of London in another post, but I had my usual dip in, dip out taste of drinking in Glasgow.  Well Glasgow near its two main railways stations and limited at that. After all, I  shouldn'tt keep my old Mum waiting too long for the prodigal son.

I have always said that real ale's weakness is quality.  It is simple really.  When you have a perishable product, freshness is extremely important and one which seems to me is all to often a nettle which many obviously fail to grasp.  What's difficult to understand?  If it is going to go off first, then have a strategy to sell it before it does. If you can't do that then don't sell it at all.  But let's start off with the positive. There is no such complacency in the Drum and Monkey.  They know how to look after beer there and how to build up trade.  A reputation for quality beer will attract beer drinkers, just as a lack of care will repel them.  The Drum and Monkey has a good lunchtime trade and many of them drink cask.  It is a Nicolson's pub and while their corporate ethos must help, they also have a dedicated team that appreciates cask and have an enthusiasm for the product.  It makes for dependability and that is good. Who wants a beer lottery? 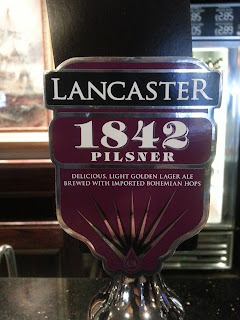 Sadly if you pop along the road to JDW's Counting House, that's just what you'll get.  Around 16 handpumps and you don't see many drinking cask, which probably explains why my beer was vinegar, but not why it was still on sale.  Two fellow travellers - from Hull as it happens - we had a chat - also handed beer back. Not a good thing and of course for every bad beer purchased, cask ale loses a customer and of course, sometimes the blame is wrongly put on to the brewery.  Just across the road, from its stablemate, the other Queen St area JDW is Camperdown Place and provides a welcome contrast..  It admittedly rarely has such a good range and not nearly so many handpumps, but it is always a step up in quality. Please note pubs - less can be more.  My Lancaster 1842 Pilsner (I had a taste first) was excellent and in stark contrast to the same vinegar I had a few minutes before.

On the way back south I had a quick nip into the Pot Still.  No quality problems there either. Two handpumps, both serving top quality beer, even though I was clearly the first cask beer customer.  That's better.  Have two and serve them well and it will stand you in good stead.  One mark off for both beers being jet black and very similar though I'll add it back for the welcome chat about Dumbarton FC.   Heading for the train now, opposite Central Station is the Toby Jug.  This is a long standing cask outlet and in my opinion the quality never rises above okayish from the three handpumps, which is probably one to many.  Again I never see anyone else drinking real ale when I go in.  That surely tells its own story.

Just a snapshot, but if I was to give advice to pubs selling cask in an area where old style keg is still king, it would be:  "Just sell one cask beer in great nick than three in bad."

There is no real ale in Dumbarton though a JDW coming soon will change that. Should be interesting.
Posted by Tandleman at 14:09

What the hell is a 'lager ale'?

The Standing Order's an Edinburgh Spoons - have they got one in Glasgow too?

Better to have one cask beer in good nick and three craft keg pumps?

On the other hand, if no-one is coming in and drinking your ale, maybe its because you haven't got enough choice to attract the enthusiasts. One little backstreet pub I go to typically has 8-10 handpumps on, all in perfect condition, and its always busy. Its a virtuous circle. Good choice brings in the punters, and the flow of punters allows you to be able to provide a good choice without the beer turning to vinegar.

Better by far to encourage your regulars by serving a beer or couple of beers that they like and that's always good condition wise, then build up. In my opinion of course.

@py0 - we have had this argument before, but what works for one pub isn't necessarily going to work for them all, There are only so many potential customers for little back-street multi-beer pubs and to say this is a viable model for most, or even many, pubs is just silly.

@Ghost Drinker: (-: Well, maybe - sure, ale refers to the fermentation method and lagering to the conditioning method, but it does say "lager ale" rather than "lagered ale" which is what you could argue Kölsch to be.

@py0: you're right, but there's a lot more involved than just choice. You have to do something to pull the punters in to see you have a great choice of great beer - which will also depend what the local competition is like - plus you're going to have to be ready to chuck a lot that's gone off while you're building up trade.

All this talking about what pubs "should" do ignores the fact that many pubs are tied to the pubco or brewery that owns them. The choice - often very limited - is usually from an approved list, and the tie would apply to bottled beers too.

I have seen the big bang approach - put on loads of ales and hope you get the customers in - go disastrously wrong quite a few times. If a licensee, knowing my involvement in CAMRA, asks my opinion, I suggest the Tandleman line, i.e get one or two and build up. I also suggest they ask the pubco or brewery to provide materials for a launch night, rather than just putting them on quietly and hoping for the best.

Quite a few times I've been told that "We tried that real ale once but you CAMRA lot didn't come in!" Then I have to explain there aren't enough CAMRA members to keep every real ale pub going, and that they have to build up their own customers. Pennies drop that there isn't an easy supply of customers just waiting for the moment they put a cask of Greene King IPA.

"You don't see many drinking cask." Is this still symptomatic of parts of Scotland?

I ask the question purely because it is getting on for 30 years since I last had a pint north of the border, (shameful I know!). Scotland embraced lager long before the English did; I just wonder whether old habits are dying hard?

ps. No excuse for a company like Wetherspoons to be serving beer that is clearly long past its sell by date.


On the plus side you didn't drink any of that over-rated, over-hyped and over-priced Scottish shite Brewdog.

A trip to bonny scotland and no tennets lager? Poor show.

@Paul: in my experience, while there's a lot of cask beer drunk in the centres of the cities and larger towns in Scotland, if you just go in a pub at random, even an attractive one in a touristy location, you probably won't find any cask, whereas in England very likely you will.

There's also a fair bit of the "one apologetic handpump at the end of the bar syndrome", which you suspect might well have been just put on for the tourists and probably won't be any good.

And why do pubs in Scotland have Tetley Bitter or Old Speckled Hen as their sole cask beer?

Its no coincidence that the "one apologetic handpump" is always some horrible generic muck that tastes like a mouthful of sugary mud anyway. Might as well not bother at all.