Live from the Velodrome 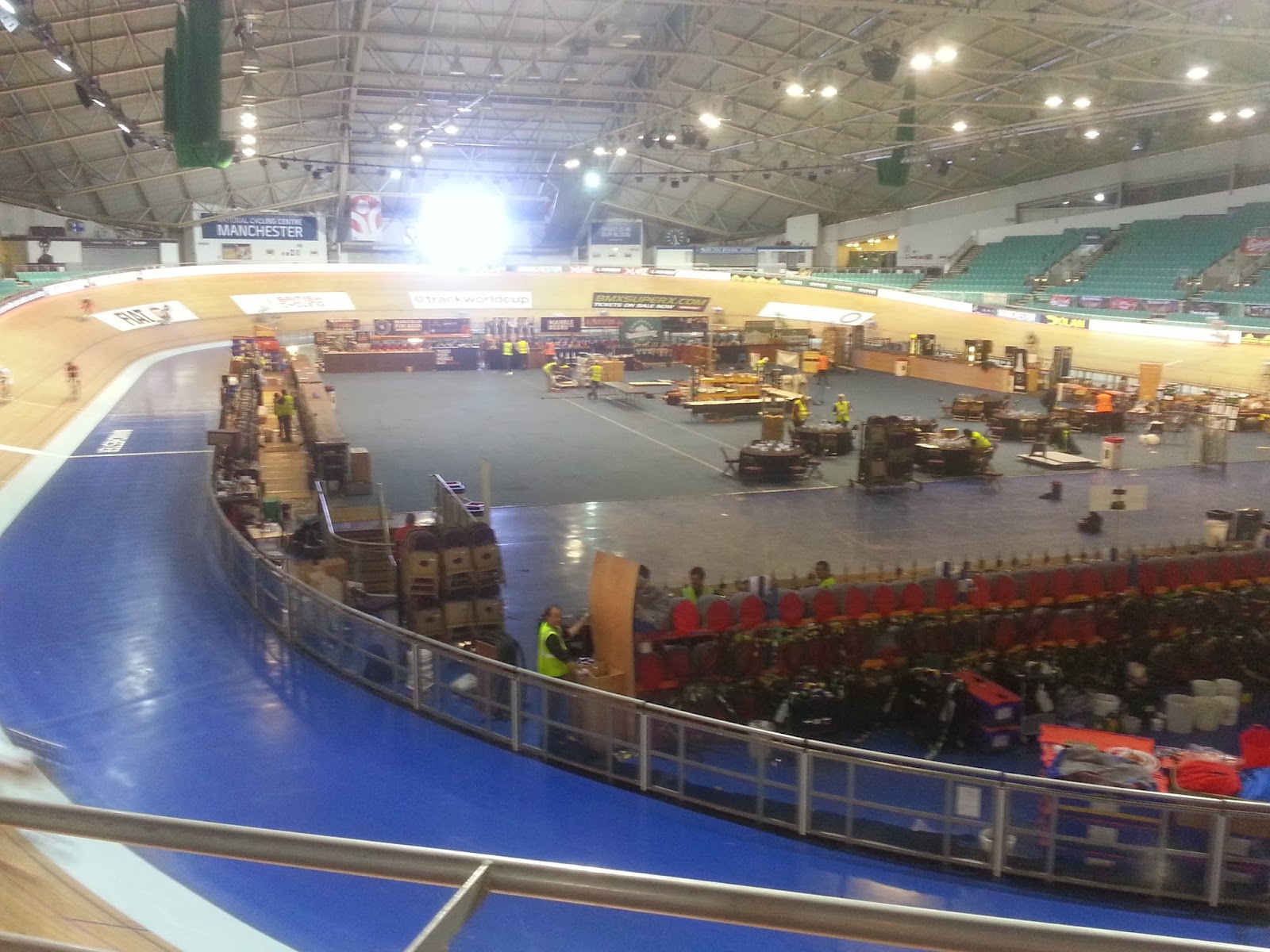 It is nearly ready and boy has it taken a lot of effort, but the Manchester Beer and Cider Festival will open to trade members tomorrow at one, with the public to follow. The venue is most impressive and the photo which accompanies this blog entry hardly does it justice, though hopefully it captures at least some of the scale.

I'm off home for an early night.  I won't be home before midnight for the next four days and in here by around nine thirty.  Is it worth it? We'll see, but my favourite session is tomorrow's trade session as I'll know lots of beery people. I'll have the odd beer too amongst the paperwork and other tasks.

That'll be rather nice.

It isn't too late to decide to come along you know. We've loads of beer and loads of room and you really would be most welcome.
Posted by Tandleman at 17:46

not sure if that lighting's going to make for a good pulling spot.

Don't worry. You can put on your copping off underpants. It looks like a floodlight but it is just the big scoreboard. Quite dim in actuality.

Cookie has had the same pair of copping-off underpants for years.
They're box fresh.
Wahaay !
Good luck with the festival.

good luck mr t, doubt ill be able to make the trade session as im brewing, but im sure someone will be there from the brewery. good luck, looks like itll be a cracker

Since the Tand signed my copping off underpants they have never been more lucky, Pie Tin.

Trust me folks. Find the Tand at the festival and get him to autograph your underpants.

Thanks for all the hard work! Looking forward to visiting on Friday.

Hmm. My guess is that the "Trade Session" is more about the Session than the Trade.

Went to the velodrome along with 5 other working souls for the Friday evening session. Queued in the rain to get in. Paid top wack and found half the beers sold out, especially the award winners. Ended up suppin' beers I could get anywhere. But I'm not bitter!
Nev Eragen

You want CAMRA to be able to control the weather or are you saying there shouldn't be a queue? Your post would be been more useful if you'd said how long you had to queue for? I've queued in the rain for many things, not just beer festivals.

Whilst the festival had some previous history, it was also the first festival at that venue. Yes, the number of people attending was underestimated but the only other option was to overestimate and run the risk of a big loss. The organisers did get extra beer in.

You must get out a lot more than me as I was there until 7pm and I found it very easy to drink beer that I'd never had before.

The award winners *always* sell out very quickly. Always have and always will. If you want to drink them, then you have to attend earlier in the festival.

I think it was a great festival and the only legitimate operational gripe was the toilets. They'll be more beer next year as they now have a better handle on the amount drunk and if there was a queuing problem, then I'm sure that can be looked at. Were advanced tickets sales available?

You are right Rob. It is a difficult balancing act is a beer festival.

We will be doing things differently next year as you do live and learn.

I will be doing a blog piece on this later today or tomorrow.