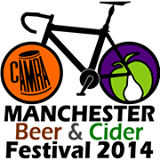 It is just over a week away Folks.  Brought to you by the same team that organised the amazingly successful National Winter Ales Festival for the last five years and from a smashing new venue, the inaugural Manchester Beer and Cider Festival takes place next week.  The venue is the amazing Velodrome at the National Cycling Centre (they insist in calling it that though everyone knows it as just "The Velodrome") but it is amazing nonetheless. Every time we go in to check something we just go "Wow!"

The Velodrome has its own tram station (Velopark),  loads of buses and for the healthy or wannabe healthy, it is only a leisurely half hour walk along the Ashton Canal from town.  Everyone is guaranteed a seat facing the action and there is the prospect of watching our Commonwealth and Olympic Games champions training as you sup your delicious pint. Training will continue throughout.  All the usual festival stuff will be there, with t shirt and book stalls, lovely grub and much more, as well as a number of brewery bars, foreign beer, a massive cider bar and real ale in a bottle. You can even do your shopping on the way home at the nearby Asda,

I won't bore you with the massive amount of work that goes into this - you can take that as read - but let's instead pick out a few highlights beer-wise that you might want to think about in advance. Let's start with Fullers, with 1845 and Vintage Ale making rare outings in cask form. Or how about Brass Castle Port Cask Christmas Kitty, aged in a port oak cask with added rum? Hand Drawn Monkey offer Red Wit, a red ale take on Belgian White.  Hardknott offer Azimuth and Dark Energy and that old favourite, the dangerously drinkable NZPA from Hawkshead will be there too. Old Ales? We got 'em.  Hydes 4X, a bit of a rarity is there, or maybe Brentwood Chockwork Orange - an old ale with orange? Chilli Plum Porter? Double IPA? Imperial Russian Stout? Milds, stouts, bitters?  We have them in abundance.  Beers from Weird Beard, Wapping, Fyne Ales, Brains, Thwaites and Hydes Craft breweries are there too, Okell's wonderful Manx Pale Ale, eight beers from Marble, collaboration brews from Mallinsons and others.  Some really cracking golden ales too. We have the lot.

Highlights from our Bière Sans Frontières bar include all the Oktoberfest beers, five from De Molen, gueuze from 3 Fontainen, Oud Beersel and Boon and Taras Boulba also makes an appearance. Ciders and perrys abound too, so there really is something for everyone and all at sensible Northern prices.  No rip off here.  A pint of Fullers Vintage Ale? Around £4.50 you'll find.

Right.  I think you get the picture.  It's the only show in town and I do hope to see lots of you there.

The Festival is from Wednesday 22nd to Saturday 25th.  Full details and the beer list from this link. Expect more from me on this and yes, I'm involved in the organisation of the event.

Really looking forward to it. See you Wednesday morning ;-)

See you there Dom. We'll also have the Brewer's Table innovation at the Trade Session.

See you there too Cookster.

I'll be there on the Saturday. So everything I want will presumably be gone.

A sad fact of all beer festivals.

I'm booked into the Great Ancoats Street Travelodge for Thursday and Friday nights. :)

A bit of a lucky dip. Some good ones and some right shite.

Friday night was a bit disappointing with very limited choice as most beers had sold out , the champion beers ie.'lakes 5 hop' should have been re-stocked for us all to cherish ! . My personal fave was the hand drawn monkey smaller ipa (only 2.8 % but tasted much bigger).
Probably avoid next year and go to port st/Manchester pub crawl.