The gruffness of German waiters is legendary.  It is a matter of professional pride to many never to crack a smile, though maybe that is changing as more and more of them hail from East Europe.  Until you come across one of the old school that is.

In Munich last month, our little party of four decided to eat at the Loewenbrau Keller as it has a lovely big screen outdoors on the terrace where we could watch the semi final of the World Cup involving Germany and Brazil.  Alas it wasn't to be, as torrential rain forced us inside.  Still, we got a nice table just a dozen steps down from a room with loads of tables and a telly.  There was lots of room at the back to stand if need be and nobody minded us doing so.  The Germans, all flags and painted faces, were seated in neat benched rows.  Even football watching seemed organised and, well, neat. 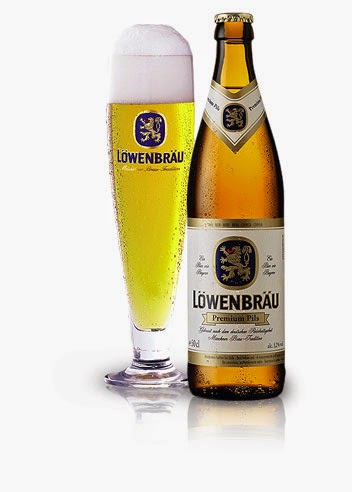 We ordered drinks.  Now we'd been before for a nightcap and the girls really liked Loewenbrau Pils.  I do too. It is delicate, but with a firm body and a bitter, perfumey finish. It is actually rather an elegant drink. Two were ordered.  Our waiter, an elderly type, said that they'd be better with Helles as the Pils was too bitter for women.  Now Janet is a bit of a hop fiend and can take as much hops as the next person, even if that next person is a 100 IBU one.  Eileen is not the kind of person you tell what she can or can't drink.  Trust me on that one.  Pils were insisted on and provided. I spent quite a lot of time running up and down the stairs in response the the roars of the lads and lasses in the tv room.  We enjoyed our beer and the hearty food and it was a great night, despite the wet walk home and the Pils Denier.

I won't say whether or not I had a German flag painted on each arm, but will say that I didn't have one on my face. Unlike some other Brits present.

The Loewenbrau Keller is huge and only a fraction of the size it used to be.  Maybe not the best beer in the world, but that pils is good.
Posted by Tandleman at 17:49

I much prefer Central European barstaff, but then I am the kind of chap that likes to be left alone to enjoy my pint rather than have some spotty yoof constantly asking if everything is ok.

Have drunk a couple of times in the slightly cramped beer garden in front of Loewenbrau Keller, but have never set foot inside. Must rectify that next time I'm in Munich.

Must also give the Pils a try, although I've heard some waiters don't like serving it because it takes a long time to pour?

Like Paul, I've only drunk in the beer garden there, which on a summer evening was quite pleasant. Their Dunkles was one of the stand-out beers of my trip to Munich.