The Good Thing About Unsparkled Beer


You can't really bugger up an unsparkled pint. Well you can, but it will be hard to tell the difference, or, crucially, how good it could have been, because of course it isn't sparkled and therefore presented at its best. As God intended. 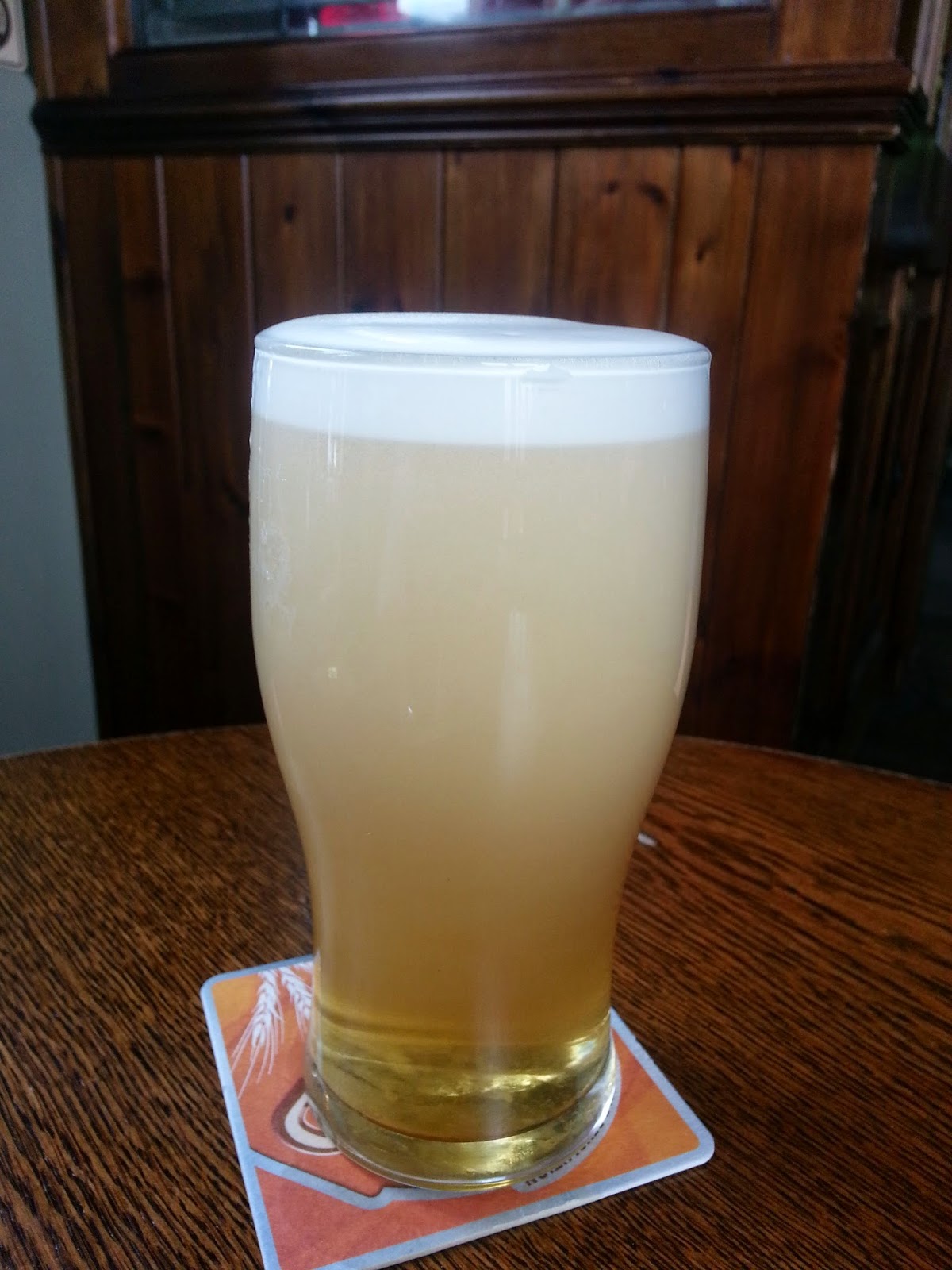 I considered this basic truth when in one of my local pubs last night. The key to pulling a good sparkled pint is in the initial pull, which must be vigorous enough to produce the creamy head. The swan neck must go to the bottom of the glass, with the glass held straight, not tilted. The second pull can usually be less strong and the nozzle should always be kept in the beer, not raised as the glass fills. When the fill is nearly complete,a good barperson will hesitate near the top, take your money and let the pint settle while doing so. Then the pint is topped up by inserting the swan neck back into the body of the beer. It should be topped up from below, allowing the fine collar of cream to remain intact. That's the key to using a swan neck and sparkler, you fill the glass from the bottom. 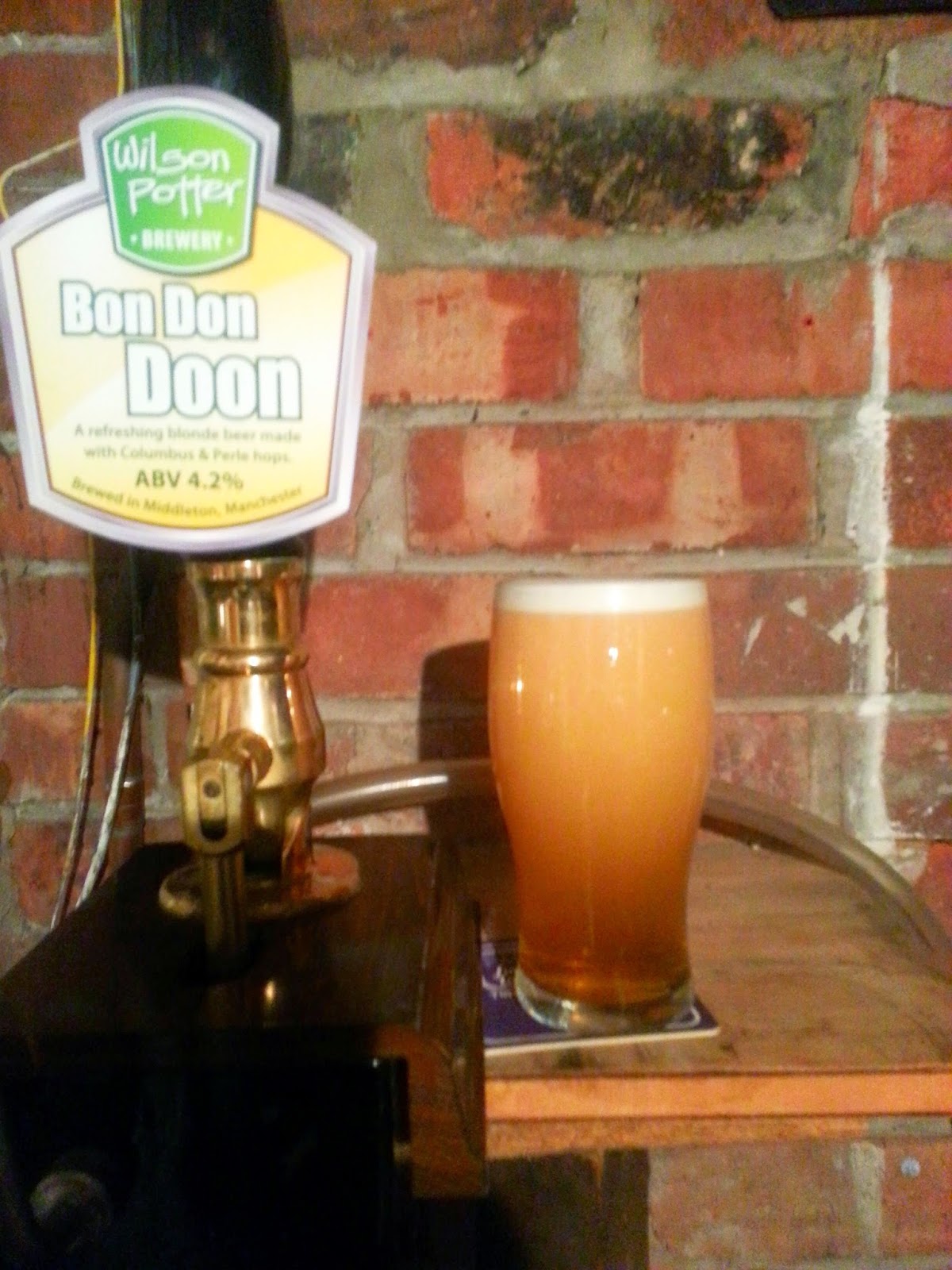 There's a skill to this, but frankly it is a piece of cake once you have pulled a few pints. This is especially true when the same range of beers are sold. You get used to how they behave, but the principle is the same. Why am I telling you this? Well of course education of the heaving masses might be one reason and an honourable one at that. But it isn't. A couple of my pints were spoiled last night by incorrect topping up from the top which tends to bubble the beer and dissipate the head.

To the sparkler hater, this is neither here nor there, but to those of us that follow the true path of enlightenment, it is a heartbreaker.

At least being the North, the beer was beautifully conditioned and cool. The photos show a Yorkshire pint settling in the Riverhead Brewery Tap and the other one poured by me at home. Neither was the beer drunk last night.

PS Bon Don Doon from Wilson Potter is a lovely beer. As always, I am available to teach the uninitiated for a very reasonable fee.

Pah, they're the devil's work.

You have a handpump with swan neck & sparkler (all three colours, I assume!) at home?

Nick. Jawohl! All three colours? I have five so far (white, red, black, green and orange, plus metal, plastic rings and a variable one, but alas no dog's dick. I used to own one but somehow it has become lost.

If anyone has a working dog's dick sparkler they don't need, let me know.

another one poured by you at home?

You have your own hand pull & cask?

I think that's a blog post all its own, fella.

Don't be too excited Cookie. It was for a Christmas Party and I haven't had any cask in the house since.

Ah the craft involved in pulling a sparkled pint of beer. Makes you wonder if all the haters are just lazy and can't pull a proper pint.


Cookie, what you mean you haven't got a handpump at home? Call yourself a member of the pongy beer club?! Come round to ours and you can coo over our cooling system.

The swan-neck pipe reaching to the bottom of the glass was unknown this side of the Pennines thirty years ago, of course. But there was still plenty of good cask beer. I always used to like a dog's dick, myself.

The dog's dick did the same job of course.

Why would anyone want their pint ruined like this, if you weird northerners want that then order a smmothflow abomination.

Cream belongs on strawberries, not on top of beer.

I think you'll find it is beer, not cream. No wonder you are confused.

Horses for courses. I'll serve the ale however the imbiber requires. Personally, I prefer a thick white top, but I'm a northerner.

Googling "dog dick sparkler" has not turned up the photos I was hoping for. An 11-year-old Curmudgeon column did come up though.

So how do (did) they work? What was so special about them?

I'm a Northerner but I'm not as wedded to the sparkler as some others here. Badly used, they produce a pint with all the condition knocked out of it and can cause a lot of wastage. I am surprised how often I've come across bar staff who haven't been shown how to pull a pint; they end up just yanking on the handpump and mostly filling the drip tray.

As TM says, using a handpump is easy, so it wouldn't take a licensee more than a couple of minutes to show a new employee how to use one, thus saving pounds by not wasting beer.

A dog's dick was basically a white cylindrical plastic device that was screwed on to the pump nozzle, and when beer was pulled through it, an inner section was pushed out and downwards, thus spreading out the flow of beer into the liquid in the glass and taking at least some of it nearer the bottom. The derivation of the name is fairly obvious ;-)

I'd agree with Nev on this one - nothing against sparklered beer, and it's pretty much the norm around here. But in the wrong hands it can easily ruin a pint, and I often enjoy fresh unsparklered pints in the South of England. A thinner, looser head doesn't mean a beer is lacking condition.

"Nothing against sparklered beer, and it's pretty much the norm around here. But in the wrong hands it can easily ruin a pint, and I often enjoy fresh unsparklered pints in the South of England. A thinner, looser head doesn't mean a beer is lacking condition."

Well spoken, Mudge, and despite all the north-south banter it's definitely horses for courses, or "When in Rome".

Funny isn't it how 'no-nonsense' Northerners turn into big jessies when it comes to beer - attaching a plastic tit to the pump and banging on about 'creamy heads'...

If you like a sparkler you must love cans with a widget.

py: Now why would you imagine that follows? One is created by the beer's own internal CO2 in a live beer, the other by extraneous nitrogen in a pasteurised beer.

Not the same thing at all.

Next you'll be telling us you can tell the difference.

Wouldn't dream of it.