It's nearly that time of year again where we present some beers to the general public at the 27th Oldham Beer Festival. I've been involved in most of them and will be curating the beer for your delectation. 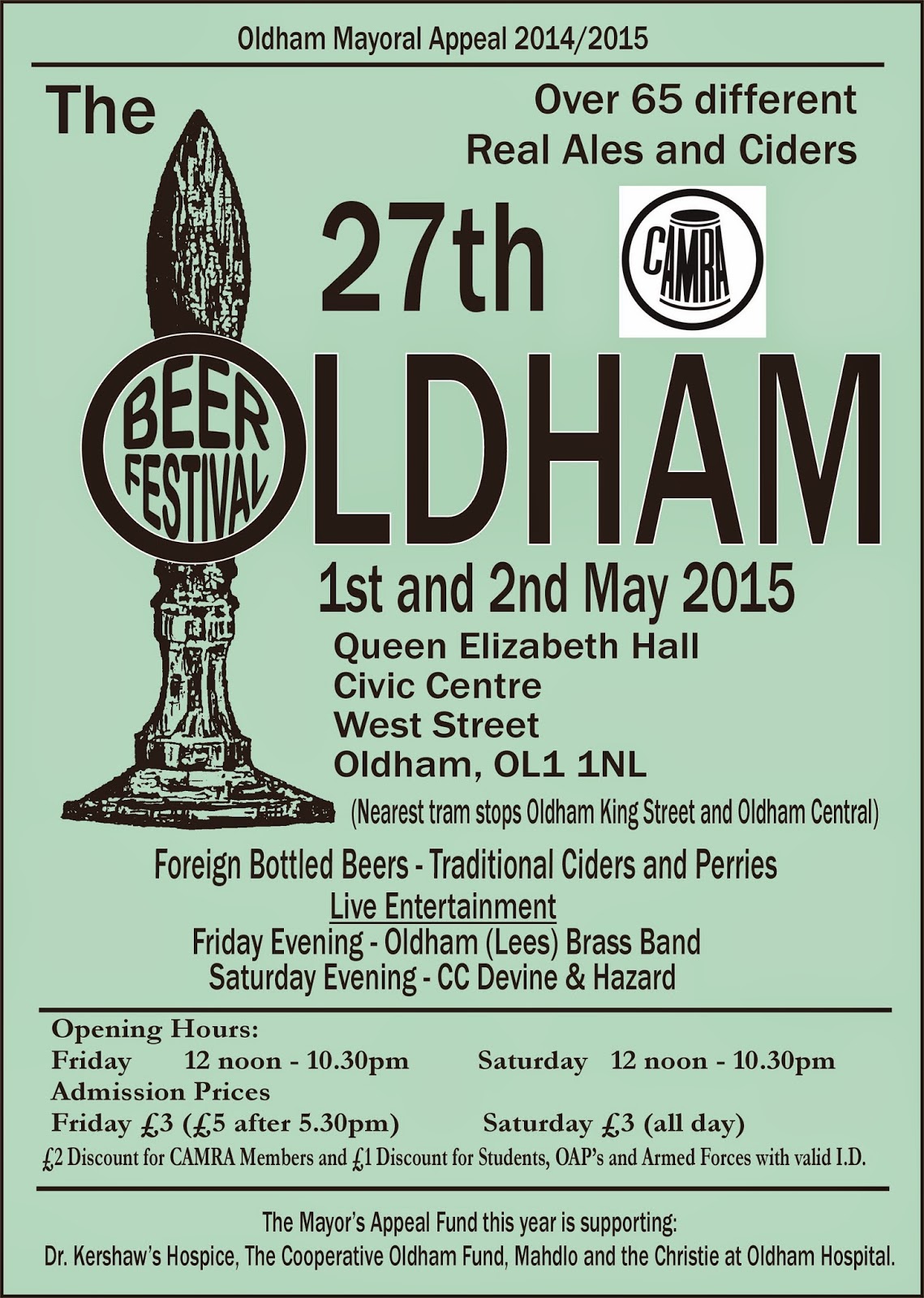 The list is awesome, featuring some of the best and most progressive breweries in the UK. Fancy any Arbor? We have it. Hardknott? You betcha. Redemption? "Certainly Sir." "Blackjack Madam? Of course." "A pint? Just as you wish." Something beginning with "P"? "Easy peasy. We have Pictish, Portobello and Privateer." "What about local breweries? Well we have the fantastic Wilson Potter Brewing a special ruby beer to celebrate CAMRA Rochdale, Oldham and Bury's 40th Anniversary or Seven Brothers, Tickety Brew, Track and Millstone." New breweries? Yep. What about Martland Mill from Wigan? or Revolutions from West Yorkshire?" "What? You just fancy a pint of John Willies? Of course. The new seasonal will be on and we have the Champion Winter Strong Ale, Moonraker on cask."

From further afield come Saltaire and Roosters from West and North Yorkshire respectively and even XT from Buckinghamshire.  We musn't forget our own local stars, Outstanding, Silver St, Deeply Vale, Irwell Works, Greenfield, Brightside and Hay Rake.  While hopefully none of the beers will disappoint and there should be something for everyone, I'll pick out a few I'm looking forward to.  Hardknott's Lux Borealis and Infra Red, Saltaire Triple Chocoholic, Arbor Blue Sky Drinking all appeal and of course one brewery and beer I haven't mention is the one I brewed with Ramsbottom Craft, Chocolate Chilli Stout, which will certainly be on. We'll also have the wonderful Flaori Maori.  Rooster's Baby Faced Assassin is also likely to charm.

If you fancy Cider and Perry, ours is, chosen by the former Cider Manager of GBBF who will also present them and answer all your apple and pear based drink questions.  Oh and foreign beer. We'll have that too in a well chosen bottle selection.  We even have fruit wines which are a great seller at this little do.

The info is all in the poster within this article. It will be a great do for good causes and there is plenty of seating.  So come along, sup some beer, cider or perry and do say hello to me.

There are two tongue in cheek words contained within this blog post. See if you can spot them.
Posted by Tandleman at 11:04

Let me guess - "curating " and "awesome". I always enjoy this festival but sadly this year I'll be away at both the First Dutch Craft Beer Festival and Het Nederlands Speciaal Bierfestival. Hope it goes well for you.

(Got the spelling right at the second attempt)

I remember when we used to go to beer festivals and be pleasantly surprised if there were a dozen beers we hadn't tried before. Nowadays I find I have never even heard of half the breweries. Long may that continue.

Err, Revolutions have been brewing since 2011. I guess they don't get sold into Manchester very much?

The only Oldham Beer Festival I've been to was the one celebrating 150 years of Oldham Council, for which CAMRA advertised 150 beers; I was on the staff. Inevitably, because of non-deliveries or beers that weren't ready, there were only 140-odd on. One punter told me that, because we hadn't provided the 150 beers we'd advertised, we should give the beer away free. At first I thought he was joking - silly me! - but when I realised that he wasn't, I told him that if he could tell me of another pub in Oldham with 140 beers on, I'd personally ensure he had free beer all afternoon.

Not a satisfied customer, I'm afraid.

Good to see Portobello in there

I'd come along if it was in somewhere nicer than Oldham. Enjoy yourself, fella.

I've been to Oldham now I come to think of it. First year of university. Had a friend from college whose parents had renovated this big fire damaged manor house near a place called Glossop. We went out in Oldham and visited the first ever Yates Wine Lodge.

Are there no graphic designers in Oldham?

A fair point but the Mayor of Oldham's Appeal Committee do these.

Volunteers I suppose are needed to redesign.

Jeff there is nothing at all wrong with that flyer. Hate all this style over substance graphic design shit. You're just playing into the hands of the no marks who want to charge us a fortune to do all that shit.

The issue with this beer festival is not the flyer. It's that it's in Oldham. It's one of those places - like Grimsby, or Wigan or Burnley - that just sounds ghastly.

They'd be better off spending money on a branding agency to come up with a new name for their town than on graphic designers for their beer festival flyers.