The Great and the Good


No, not a run-down of bloggers and their foibles- I'll save that until another time - but a visit, on Saturday evening,  to my Branch area by the CAMRA National Executive and Regional Directors, who are collectively known as the NERDS. See? Even at the top, CAMRA does tongue in cheek.  Sortof.

After (a dry*) meeting in the Lancashire Fusiliers Museum in Bury they'd hot coached it to Rochdale where the National Chairman no less was going to assist me in presenting two Pub of the Year Awards to the Baum.  I don't exactly need help after 20 odd years of doing this and saying a few words, but hey, when the Great Chief is in town it would be rude not to. Besides Colin is a splendid fellow. It was also a chance for the NERDS to visit this recently former National Pub of the Year, which many hadn't been to. 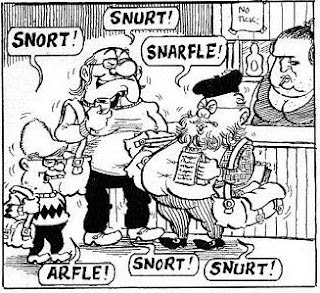 They leapt or limped off the bus like a broad section of Viz stereotypes and sweeping all before them hit the bar and ordered pints. It was a mixed scene. Not so many beards, in fact hardly any and there was even a fair sprinkling of women amongst them.  They were a cheery bunch and added to the general buzz on what was a sunny early evening in Rochdale - in itself worth putting out the flags for.  We went outside for the presentation and photos. The Baum has a large and very nice beer garden.  I said a few words, Colin said a few words, Simon from the Baum said a few words and returned to his duties inside.

The NERDS left for their next engagement and we returned to the serious business of supping. It had all been very pleasant really, like most CAMRA events.

*When I say dry, I mean they drank no alcohol during the meeting. And yes it was dry too.  Apparently.   I'm off on my hols now. See you all in a couple of weeks and on Twitter.

I visited the Baum last summer for a social of PCS regional reps, past and present. I was very impressed and enjoyed both the food and the beer. The only problem was that I missed the last convenient train back to Southport (in the evening, the connections aren't very good) and it took me over 3 hours to get home. Worth it though.