Augustiner Bräustuben and the Hofbräuhaus


Funnily enough in the many times I've been to Munich, I've never visited the Augustiner Bräustuben. I'd heard it was good of course and knew people who'd been there, but not me.  Last week our hotel was just a few minutes walk away and we thought we'd take a look.  We went on Tuesday night, though on the same morning we'd had a quick recce. Just a normal street corner local I thought, though probably bigger inside. We returned later, after many miles of walking and two or three half litres of helles in a very small kneipe nearby, where we drank cheap Hofbrau beer and sat nonchalantly as a couple of German lads threw darts at an electronic dartboard, just centimetres from our heads. Fortunately they were good and no darts rebounded, but we weren't as comfortable as we acted.  Stiff upper lip and all that. 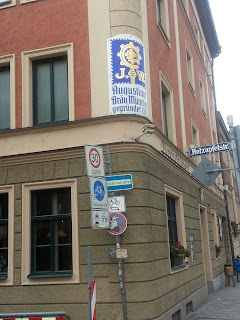 Man does not though live by beer alone, though I've been known to give it a jolly good try.  The sky had greyed up and rain was spitting intermittently, when about eight o'clock we entered the Bräustuben. Bloody Hell.  It was not only massive, but filled to the rafters with jolly Germans scooping it down and scoffing enormous plates of pork. There must have been several hundred of them. And us.  A friendly waiter wedged us on the edge of a bench, delivered us of Augustiner Edelstoff and left us to it.  I looked around at a scene that has become familiar over the years. Germans eating out in droves on a midweek night.  We ate and drank well that night in a great atmosphere despite having to have many incorrect items (cheerfully) removed from the bill.

The day before when we arrived, we walked through the streets; me to re familiarise myself and Mike to see for the first time.  Our first pint was in Augustiner am Platzl, opposite the Hofbräuhaus.  It is a fair size, but boy was it busy. We perched at the end of a table, but just had one. It really wasn't that comfortable, though it didn't seem to bother the locals who ate uncomfortably balanced on high stools, while all sorts brushed past.  Mike doesn't eat meat, which makes life tricky in Germany. He looked up the Hofbräuhaus on the internet and there was two or three veggie dishes on the menu and we were hungry. "Could we go there?" Of course. It isn't everyone's cup of tea, but it is mine.  Normally. Now this is one huge place and it was rammed, though we did eventually find a seat after ten minutes or so.  Our waiter wasn't at all jolly and was mostly absent and smelling strongly of smoke when he did return. We talked to a couple of Swiss folks on our table and we (and they) waited interminably for our beer and interminably for our food, though Mike was doomed to cheese and bread, as all cooked veggie options were off.  It was a better visit last year, but I get the feeling that complacency has set in, waiter wise, though to be fair, my roast pork in paprika cream sauce and spaezle was delicious.

There's a lot of money in Munich.. Everywhere was the same. In midweek nights, it was packed and not just with tourists either, though it seemed to me, a keen observer of the German pub scene, that in some areas at least that hospitality and service was sorely lacking, even if customers certainly were not.

And my old favourite Hofbräu Dunkel seemed thin and unappealing, though maybe that was the poor experience. It was a good night though on Tuesday at the Bräustuben even if we did get pissed wet through on leaving.
Posted by Tandleman at 15:26

Had a similar experience in the Braustuben last October - everywhere heaving, Edelstoff and food wonderful, service surly (no add-ons but those pretzels soon add up). Can't complain too much at those prices though.

We were unable to find a seat at the Bräustuben three years ago. Mind you it was a wet evening, and with definitely no chance of dining outdoors elsewhere, it seemed as though half of Munich was in the place.

I would like to pick a quieter time, and go back because I liked what I saw.

In Berlin, on the other hand, we had a sod of a time finding anywhere that did German food. We were tripping over restaurants serving just about every other kind of cooking, from American to Indonesian, but if we fancied a humble Schnitzel mit Bratkartoffeln or Kabeljaufilet mit Schmorkohl we really had to hunt. We did pass one place doing Bavarian specialities - and serving beer by the Maß - but I was persuaded that being unable to understand most of the words on the menu probably wasn't a good sign.

Last time (and probably the last time ever) I was in Hofbräu it took me over and hour to get a beer. The longest I've ever waited by a long way. If I want to drink around Paltzl, the Ayinger or Augustiner pubs are much better options.

The Bräustuben is I think the only Augustiner pub in central Munich I've not been to, and pretty much the only brewery tap too. If you're coming out of the Hauptbahnhof and want to drink Augustiner beer, there's a natural tendency to turn left and head along the street to the Augustinerkeller, or right and walk down to the Grossgaststätte or Am Platzl, rather than wander into the housing estate behind the station looking for the brewery. It's a bit cheaper than the other Augustiner outlets isn't it?

It is cheap and it is good. An Edelstoff is a mere €2.85 and food is reasonable too.

Actually you can get a tram from the Hauptbanhof straight to the door more or less.

Ron - Agreed. But the Ayinger place is not at all comfortable for the drinker when busy and they look down their nose when you don't eat. Of course you are welcomed with open arms when not busy which is a hypocrisy of a sort.

Looking on a map, the Bräustuben doesn't seem too far from the Augustinerkeller across the Hackerbrücke either. Have to add it to the list of places I want to go to next time I'm in Munich.

In a world of lederhosen I hope you walk around in a kilt.

Hofbräu Dunkel has always been thin, nearly cola-like, at least as long as I've known it. I've never been to the Bräustube, hadn't even heard of it before this. But then, no Munich fan me. I'd go for a "fresh" Hell there though, I suppose.

Had a bottle of Edelstoff last night, as dumb luck would have it, first one in a year or two. Got it to compare it to a bottle of similar strength and colour Gampert Bräu Förster Gold (Franconia). Which, of course, blew the Edelstoff away, as it has at least SOME decent malt and hop character, not just a whiff of sulphur.

Couldn't finish even half of either, mind you.

Had the same impression about the staff's manner all over Munchen's beer places (I've been to many). The waiters and barmen are not hostile but...No, they are definetely not friendly. I was told that's the particular Bavarian trait - they are just businesslike, not grumpy.

But I have to disagree - almost every time you order a beer you are treated like you are applying for a job and citizenship there.