One of our Sunday crew, Colin, has a record of losing his coat from our pub. Always it has turned out that someone else, known to him and to the rest of us has taken it by mistake. The sort of mistake that you may well infer has a degree of alcoholic influence behind it. 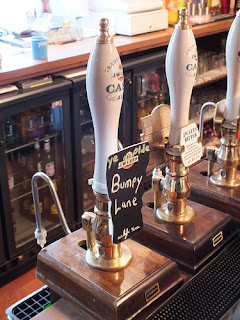 Last Sunday after a typical session. We - Colin me and E - were offered a lift down the lane by one of the other regulars whose wife had called to collect him in a big 4x4. We accepted as it was inclement and well, who in truth really fancies a mile walk down a rutted, cow shit filled lane in the dark?  E and I were in the car, Colin was in the pub rummaging for his coat. He couldn't find it. The curse of Colin's coat had struck again.  With all of us hooting disrespectful comments from the car, he reluctantly left the pub and jumped in, casting wistful glances back into the pub. At the bottom of the lane E and I hopped out. Our benefactor was passing Colin's door and dropping him off there.  We turned to the nearby bus stop and I put my hand in my pocket to find an unfamiliar object there. It was Colin's cap. I was wearing his coat.

Well. What to do? E nipped along a couple of hundred yards to Colin's with the coat and I, fortunately with a thick jumper on given that it was chilly,  trudged wearily back up the lane for the mile to the pub to fetch my own coat.  I met a couple of our lads on the way down who were not entirely sympathetic to my predicament.   I may even have heard the buggers laughing as I walked on.  John the landlord did keep a sort of straight face, but not by much, when I re-appeared.  At least the walk down was warmer and downhill.

This Sunday when I arrived at the pub I was subjected to many coat based comments and much ribbing.  One of the things about having a local is from time to time you take a fair bit of stick.  Still, it's nice to belong.

When on that lane at night alone you realise how creepy it is.  And bloody dark for a fair bit, as lighting only goes half way up.  E was meantime as snug as a bug in Colin's house.  Despite a fair few pints, my extra two miles certainly sobered me up.
Posted by Tandleman at 14:29

Labels: My Local
Email ThisBlogThis!Share to TwitterShare to FacebookShare to Pinterest

By heck,it's all going on 'oop North.
In next week's episode Compo accidentally sees Nora Batty hanging out her bloomers on the washing line.

This made me smile - great stuff Peter.

You need to have a more distinctive coat!

You don't have TAND branded clobber?

Cookie - of course he does. And so does Colin.

No flashlight function on your mobile?

Joycean in its evocation of the heroics of ordinary life. Love it.

After putting on three pairs of socks, six jumpers, six pairs of trousers, five woolly hats, four scarves, two thick coats and a pair of boots, I waddled outside.

Ten seconds later I was laying face down in the snow and I couldn't move.

"You're coming with me," said the Primark security guard.

I hope to finally visit this mythical pub when I'm visiting family over Christmas. Just need to persuade someone to give me a lift there!