Two New (to me) London Pubs


I mentioned here that I intended to visit a pub new to me near Liverpool St Station, but re-reading it, I failed to mention what it was. Let's put that right. It was the Williams Ale and Cider House.  So, with a little time on my hands (or so I thought) I set off to have look.  Easy enough to find in Artillery Lane which is just off Liverpool St itself, this at first glance looks like a throwback to Tap and Spiles of yore kind of place. Bare boards, breweriana on the walls, lots of handpumps, lots of wood.  But wait. With a thorough look round it looks like a throwback to Tap and Spiles of yore.  If you are young enough not to have seen this type of place - commonly then referred to as "Ale House" - you'll likely think it to be rather fetchingly old fashioned. If not it will look like...... well you get the idea. So, given the name, full marks for not re-inventing the wheel and doing what it says on the tin.

Surprisingly being lunchtime and given the area, there were a few suits; it wasn't that busy. An alert young barman offered me tastes of a mostly London based selection.  The beer was just a tad warm.  To my surprise as I stood at the bar a Cask Marque inspector showed up and asked to test the beer. This was getting interesting, especially as I knew the guy, though I said nothing until he'd done his work.  Beers were tested and the manager summoned. "Everything OK" he said.  This over, I said hello. We knew each other from beer judging and he whispered that it had just scraped in at the top of the temperature range. Fair enough I suppose. In is in and it was a quiet lunchtime.  Overall I quite liked the place though black marks to the manager who operated the till while splashing beer one handed into a glass stood under the handpump.  Poor, poor, poor and if he'd done it to me he'd have been put right and I likely, would have been put out. Still overall, I'll be back. 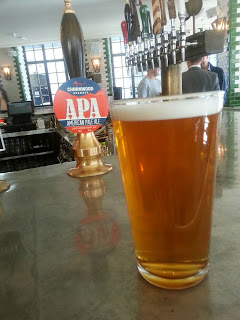 A horse of an entirely different colour is the Singer Tavern on 1 City Road, recommended to me by Stonch.  This a big, cavernous pub which when busy must be rather buzzy, but in the afternoon it was cavernous and more or less deserted, its green and white tiled décor giving an alarming sense of drinking in a large gents public lavatory. I stood at the bar for my first pint and very much enjoyed a pint of Charnwood APA which was in perfect condition and despite the photo, clear as a bell. Downside was the price and, I suppose the choice. Only two cask beers, both around 5% and £4.50 a pop. Seemingly that's the case with owners Barworks, but hey ho, better paying £4.50 for quality than £4+ for warm soup.  Service in this empty barn was at best perfunctory. I took my second pint out into the warm sunshine - great for people watching - and enjoyed my pricey beer.

So. Two different London pubs and I reckon I'll happily go back to both.

Things took a dody turn after that that when the Landlady phoned. She and her husband were in London for the JDW awards. Things got hectic after that.

Anyone else thinking that keg taps are starting to have their "usual suspects?"  Lagunitas, Camden and Magic Rock?

I was spotted in the Singer by a mate of Stonch's. Be that beardy guy with the quiff.
Posted by Tandleman at 09:18

Plonking a glass on the drip tray and pulling beer into it one-handed always comes across to me as dreadfully slapdash and unprofessional. It puts you off even before you've tasted the beer.

Tap and Spiles of yore

I'll probably go just for that if I'm ever in the neighbourhood. Reminds me of the first time I walked into Live Stockport - my immediate thought was "Firkin! Where have you been?" Felt right at home.

I wish MAgic Rock were a usual suspect, more likely to find brewdog or kernel

Williams Ale House is owned by Greene King so that's a plus for them.You were lucky the Singer Tavern was empty as when even slightly busy the noise bouncing off the hard surfaces is deafening.Think I was charged £2.40 for a half of 4.5 beer from Tiny Rebel.oldgeezer

Yes it is a GK pub but there are plenty of pubs around Liverpool St that offer the atypical GK experience,it's not an area blessed with lots of good pubs but the Williams Ale & cider house is markedly different IMO & I will be going back ...agree the beer is top end temp wise though :)

I was in Williams Ale and Cider House and i was really satisfied with the beer and service which they provide. But I've never heard about Singer tavern. If you recommend it i will give it a try :)!