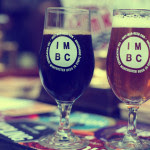 It is going to be busy. Later today I'm off to IndyManBeerCon to see what's afoot. I'm  looking forward to seeing many of my other freeloading colleagues at the Trade Session (you do have to pay for the beer though) and to having a natter with many people that I know and hopefully even meeting some that I don't. I'm sure there will be plenty there and I understand many local dignitaries, including some Camra types will be there too. There's even a special train running from London bringing the bloggerati "Oop North" for a rare trip outside the capital. (Jeff Bell has hired an entire coach for his blog contributors). Manchester isn't that scary, so don't worry Folks and IMBC will be re-assuringly expensive. I can't guarantee the beer will be murky enough for you though. That's mainly a London thing don't you know? Oh sorry. Should that be "yeast lead" enough for you?  The serious point is that it is a major Manchester beery event and it is good to have such an event in the city, so that's great. I might even try some craft keg myself, but sticking to my principles, not if it is soupy. Well, I guess we all will be. Trying it that is. These third measures can be disastrous though. You think a third pint is a just a damp glass and an hour and a half an hour later you are lying in a skip outside wondering how you got there. Well enough of last year, let's move on.

On Saturday it's down to earth with a tour of our (Camra) Bury pubs and breweries. The exact itinerary is a closely guarded secret, kept even from me, the esteemed branch chairman, so I'm looking forward to pleasant surprises and being back home tucked up in bed by half past nine completely pissed.  These are boozy affairs.  Trust me on that one.  The great imponderable, as with all such things, is whether either today or tomorrow, Tyson will be present.  Like all great statesmen though his movements are never released to the general public for crowd control reasons, so I live in hope.

I'm wriggling out of my usual Tandle Hill sesh on Sunday, but I might call in for one, just to get my name in the attendance book, as on Monday I'm off to Munich for three nights sightseeing.  That's beer for you!

And I can get a bus straight to IMBC - well more or less - from ours. Even better.  Looking forward to seeing all my beery chums on my own (sortof) turf. And it is gloriously sunny.

Now for bacon and eggs to pre-load.
Posted by Tandleman at 08:58

Thank heavens that Tyson's 'movements' aren't released to the public! All that sparkled beer must play havoc with you Northerners digestion!

It's a proven medical fact that sparkled beer aids digestion. How else do you think we cope with our diet of pies and tripe?