Not Well-Versed but a Point Remains 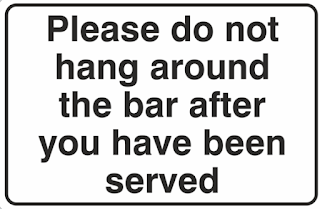 Vice Magazine - no me neither - has been yakking on about why men stand at the bar. Why they should be interested in this is a moot point, but they nonetheless come up with a theory - based on no evidence at all of course - that it is men behaving badly. Their theory is summed up in their own words "they (men) all turn into prats trying their best to-out prat each other. One of their favourite ways to do this is by getting in the way of everything. In this case, by standing up in a seated establishment.

Written by Gina Tonic - see what she did there - the article goes on to consult various behavioural gurus about this phenomenon, at the same time contradicting the theory above that pubs and bars are "seated establishments" in a sentence that correctly identifies that "Both traditional and modern drinking establishments........ are environments designed to drink and stand." More odd references follow, all supposing there are male domination factors at play. Allegations such as "Men love standing in pubs because it’s masculine. Men love showing off and peacocking, and sitting down would limit this."

Now I do recognise that all this is somewhat tongue in cheek, but there is a serious point. Bar blockers are a bloody nuisance and are off-putting - not so much to women - my experience is they are well capable of looking after themselves - but to the casual visitor to whom a wall of backs is anything but welcoming. Now if you are a local you just shout over the blockers, or tell them to get out of the fecking way, but that isn't quite so wise if you aren't au fait with those afflicting you thusly.

Nowadays, being somewhat older, by and large I only remain at the bar when I'm on my own. It just seems more friendly, especially in some pubs where (nod to Mudgie) the lack of bench seating limits the possibility of a natter with a neighbour and discourages the joining of a table where other are already sitting. I don't sit on a bar stool though. I stand. That allows me to move sideways if someone wants to get in to buy a drink. To my mind at least, standing at the bar, providing the niceties are observed, isn't a great problem. It becomes an issue when bar stools allow a number of people to camp out for the duration, oblivious and indifferent to those behind them doing their best to get even a glimpse of a barperson to attract attention to the fact that they would actually like to purchase a libation.

So what's the answer? Assuming it is actually more than a slight bugbear, to me, it is to limit the number and position of bar stools to allow free passage to the bar and thus to the amber nectar.

Down to the pub bosses then to sort out? Yup. No bar stools equals a much smaller problem.

Of course, it is often the largest spending locals who are barflies and that's an issue too. As a landlord/landlady you don't want to piss off your regulars.

I note our friend Gina Tonic also explores some other bothersome subjects in earlier articles. read them here.
Posted by Tandleman at 14:31

No barstools in Spoons, of course. But there's a particular bloke who always insists on standing right in front of the bank of handpumps in one of my locals ones despite the huge expanse of counter available to him.

Good bar staff should be able to spot waiting customers when there isn't much room at the counter. It's just a matter of paying attention.

But you drink in Ireland where they do pay attention.

Never had a problem with people sitting/standing at the bar a polite 'excuse me' works every time.