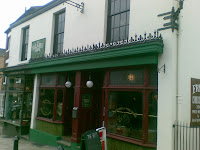 Now that I am more or less over my bout of flu or whatever it was, I felt the need to get out. Where to? Rochdale seemed like a plan, it being on a direct bus route, so Rochdale it was.
The Baum is in the 2009 Good Beer Guide and rightly so. The beer is well looked after and the place is terrific, with a sort of wine bar meets beer bar feel. It is in Toad Lane, the heart of the preservation area and one door up from the shop where the Rochdale Pioneers kicked off the co-operative movement in 1844. There's a bit of history for you! Now I am usually unlucky here. Whenever I go in I find the beers not to my liking, while looking wistfully at the pumpclip collection showing what I have missed and the notice board showing what is to come, all more appealing than the current offering. Yesterday was a little different. Greenfield Black Five was dark, malty with a distinct finishing hop bite and Hornbeam Hard Rock IPA while by no stretch of the imagination an IPA, was bitter, full bodied and very drinkable despite being 4,6%. A complete shock was that there was a drinkable Boggart beer on. I wasn't daft enough to stump up for it of course, but the barmaid gave me a decent enough sample. Stand up and be counted, Boggart - at last! Pixie Pale is hoppy, aromatic, tasty and only 3.4%. Nice! Do visit the Baum if you can, the beers were at the peak of cask conditioning and it is a very nice place indeed. 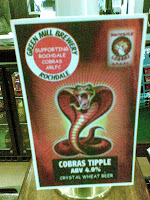 dn't leave Rochdale without trying another couple of GBG pubs. The Flying Horse had excellent Phoenix Arizona and a new one for me. Although Green Mill Brewery is in my branch area, I have never got my hands on any. Thus the chance to try Cobra Crystal Wheat Beer was welcome. It didn't disappoint, being spicy nosed and fairly bitter. In the JDW Regal Moon my choice was Bateman's Gold which had the usual Bateman's "house" taste lifted by excellent biscuity malt and a distinct hoppy finish. I finished with a fantastic strong mild. It was sensational, with a deep chocolate malt body and a vanilla finish. Pity I can't remember for the life of me who brews it!

Did I get a bad pint? Well I did, but congratulations first. Both the Baum and the Regal Moon served beers in absolutely perfect condition, at the right temperature and correctly through a tight sparkler. It is such a delight when you come across that. And the bad? Two actually. Both from Hornbeam Brewery whose Hard Rock IPA I had enjoyed in the Baum. Top Hop was at best OK if you were feeling really, really generous and Lemon Blossom was probably as bad a beer as I have had this year. Think of a cross between packet lemon meringue pie and citrus toilet cleaner and you'll be near. Drink for curiosity purposes only!

As always click on the photo for a better view!

Think of a cross between packet lemon meringue pie and citrus toilet cleaner and you'll be near.

Those words perfectly describe the Nethergate Lemon Head I had last week.

Well, I have had both Top Hop and Lemon Blossom, and have found both of them to be perfectly good beers.

I can only speak as I find. I did like the Hard Rock though!

Hornbeam are hit and miss-mostly miss in my experience. Top Hop is badly named and after sampling Lemon Blossom last night, we all thought your assessment was spot on. However, as you say, Hard Rock IPA is a good beer, so the jury remains out as to Hornbeam's merits.

On your advice, I avoided the Lemon Blossom at the Darlington beer fest this weekend, until urged to try it by a friend. Indeed I found it very pleasant, tastes do differ, on the other hand, due to my liking of Kriek I tried a "Cherry Mild" and found it absolutely awful.

Glad you had a better experience bigun.

As a CAMRA member I hope you took advantage of the 40p per pint off any guest ale for Card Carrying CAMRA members at the Baum. Offer applies Sunday - Thursday. Makes the place even more attractive.