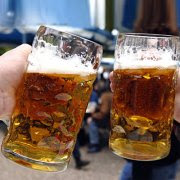 Readers of this blog may know of my interest in Germany and the German beer scene. I therefore read in the on line version of the influential Süddeutsche Zeitung newspaper, that German beer is in trouble. They say so in no uncertain terms, with the headline above, which needs no translation. Outsiders and keen observers of the German brewing scene, including me, have said so for some time and now it seems, a major German newspaper has noticed the issue.

They start by saying "When all was well with the world, in Bavaria, in each village there was a small brewery and a tavern. On Saturday evening people would head over for a few drinks and again on Sunday after a good roast pork lunch". The article goes on to demolish this bucolic scene in a withering and hard hitting way. They remark that it is all very well that Germany boasts so many breweries, but their beer is all too similar nowadays. SZ laments that at one time German brewers brewed to suit local tastes and now technology allows them to produce such bland beers, that when they are taken over by the big boys, no-one really notices. Mockingly they say that most German brewers can't even identify their own beer in a blind tasting with others!

Clearly written from a Bavarian perspective, SZ scathingly says people nowadays are happy to "drink green bottles from Prussia". They blast some of the popular German mixes such as radler and cola mix, as well as the generation of alcopops, which they call "funny lemonades". Even the beer purity laws, which state only malt, water, yeast and hops can be used in brewing, can be seen as restrictive and preventing brewpubs diversifying beer styles as much as elsewhere. The article quotes the USA, the UK and Belgium, where brewers can produce more interesting beer to compete with wine. Somewhat surprisingly the article doesn't refer to Franconia where the tradition of village breweries still abounds, but I don't suppose that was the point they were making.

The article goes on in much the same vein and is worth reading if you are remotely interested in how German beer is very much under threat. From our own UK experience it all sounds depressingly familiar and will hopefully be a wake up call to German drinkers.

The article can be found here in German only.
Posted by Tandleman at 18:29

Bloody good that this is being raised down there. As you say, it's a familiar story in so many places, and it seems odd that in a country where there is a proud "beer culture" that this should be the case. As has happened in so many other places, and for so many years (thinking of all those hundreds of breweries in Ireland that disappeared in the mid 19th century; different circumstabces, but kind of simialr in that there ended up being one brewewry to rule them all) there's a concentration of brewing into the hands of a number of very large commercial organisations, and frequently this leads to homogenisation and the death of localised tastes (they do still exist I think, though clearly not as predominant as in times past). A small brewery about 30km from where I am living has been bought out by a large corporation. I was told that the local beers would still be brewed, but I wonder will they shift over time.

As for the pre-mixed alcopopbiers, I just don't get it! Ok, I don't subscribe to the gebot, but if the locals are so proud of it, why do they do this to their beer? Gah!

But for SZ, a Munich-based paper to dare say that the gebot is (or was, it's not law now, is it?) restricvtive? I almost whooped with joy! But I would have spilt my Gampertbräu Förster-Dunkel (which does conform, naturally).

Thanks for posting this. I've found the article and will use it to practice my schlechtes Deutsch ;o)

Very interesting, thanks for the link.

Mein Deutsch ist nicht sehr gut (as you can probably tell from that) - I struggled to read just a little bit of it unfortunately. It's sad that some great brewing nations are in turmoil. I hope when the dust settles we are still left with some decent beer.

At least someone in Germany can see what's going on, but the sad thing is the ordinary people can't. They swear blind about their local beers even when they're made somewhere else after the brewery was closed down by some multinational.

It's what happened here all those years ago, sadly they seem to be walking into it with eyes wide open.

And I, too, think most German beer is bland dross.

A lot is sadly!

I guess the brewers would say they are giving their customers what they want. In most cases, sadly, (that word again) they are right.

I am very surprised that despited your interest in German beers you never came across ROTHAUS beer. This brewery from the Black Forest is a state owned one and therefore should not be subject to be taken over by the "big boys". I red a very interesting article about this brewery in the NY times dated september 18th stating that it has doubled its volume within the last 10 years (without any advertising/commercial)thanks to its authenticity which lead the German to identify themselves with ROTHAUS (unlike Beck's)...
Let's drink the genuine stuff...

The Rothaus Tannen Zäpfle is nice enough, although a bit sweet. My wife is from the Baden part of Baden-Wurttemburg, and it's fairly popular in that area allright, (a 5 litre mini-keg usually shows up for parties). Not sure how popular it is outside of BW though.

To be honest, I reckon the small Privat Brauerei are far more "genuine" than a State brewery, and I'm sure many of them are fiercly proud of their independant status and would wish to keep it so. They're the lads that need support.

Drex - I have drunk Rothaus beers in the Black Forest many a time. They are competent and drinkable. I am afraid you are missing the point though. They are good mainstream examples. No more, no less!