It seems a bit like ancient history now, but it was only last week, so I better mention Bewdley before my memories fade altogether.

I hadn't been there before, but it is immediately attractive with the Severn flowing through it and lovely old buildings lining its banks - apart that is, from a grim office block on the far bank which should never have been given planing permission. We stayed in the JDW George, a rambling old coaching house. My room was in the rafters and was immensely attractive, though a steep climb up lots of stairs. We tried a couple of the beers in the bar. Not impressive at all was Galbraith's Luncheon Ale from New Zealand (brewed at Everards) as it just seemed a middle of the road brown bitter, but we were happy to find in form Purity Pure Gold, so all was not lost. The young staff here were attentive, cheerful and quick, so credit where it is due. 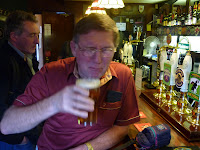 We spent most of the day on the Severn Valley Railway, so that no-one had to drive and as it was all steam that day, enjoyed the experience, including being pulled by the new Tornado,the first steam loco to be built for donkey's years.  Kidderminster was, by and large,  a forgettable dump, though with a very pleasant railway buffet, restored to GWR splendour and including very decent beer.  Then the long haul to Bridgenorth where we camped out in the buffet there, an old haunt.  Beer was again splendid, apart from a disgusting near the end of cask Northumberland Fuggles Gold.  We complained to no avail and had to buy replacements.  "It is meant to taste like that" being the response.  We left for our train and returned unexpectedly as our train was delayed, to find the Fuggles Gold off and the lines being cleaned. Naughty. 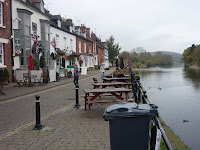 No great pub crawl in the evening. Just three highly recommended pubs, the delightfully busy Mug House for more Purity and Hereford IPA, the Waggon and Horses with Wye Valley Butty Bach and more and the Woodcolliers Arms for a nightcap of real cider from Westons.

Bewdley as an absolute delight . Go there if you can.

The photos show my mate Steve experiencing the Fuggles Gold and a view of Bewdley with the Mug House in the background.
Posted by Tandleman at 08:35

We had one of those "it's meant to taste like that" conversation in Shrewsbury. The beer in question was properly vinegary and the barman sipped it and said: "Yeah, it's meant to have a bit of a tang." Luckily, an old gent at the end of the bar insisted on trying it, too, and said: "Eugh. If you're going to make people drink that, you'll want to get more bog roll in." They backed down after that.

I refused a cloudy pint in Wetherspoons in Southport and suggested it may have been put on too soon, as I thought it wasn't off but just not fully settled. It had virtually no flavour. They agreed, but before I left the bar, I heard a barmaid say to another customer, "It's meant to be cloudy". Incidentally, that JDW is now under new management and much better.

What exactly did the NFG taste like?? Was it vinegar??

It wasn't vinegar, just bloody awful. I only had a sip of someone else's. I had chosen more luckily.

To be fair to the pub, all Northumberland beers taste like that! I've had them at pubs in Newcastle, at beer festivals over the country, and even at the brewery tap and they are all sh*te. I think they actually brew about 4 different beers (it's not a big brewery) but check out their portfolio of ales on their website!!!

Ah well. Another for my "give them a miss" list.

Yeah we've had quite a few Northumberland on in the Trackside and they've all been pretty poor. Definitely a brewery to file under "dodgy".

Your mate Steve is demonstrating what we used to call "spit out face" when the homebrewing club was in its youth and some truly vile beers were being shared. I saw a photo years ago of myself demonstrating the look.

Jeff. That's the one. You'd have enjoyed Bewdley though.