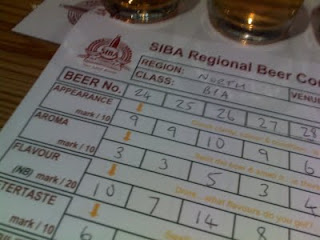 When I did my judging last week I was pleased in the first round to be tasting "Bitters and Pale Ales (Up to 4.0% ABV)". I didn't fancy the other cask category of "Strong Ales (Over 5.6% ABV)". My table was hardly expert, with a local wine merchant who spat all his beer into a bucket, a nice, young, cask ale loving lass who'd won her place in a Barrow Evening Mail contest and the boyfriend of one of the SIBA women who were providing general assistance and bringing us the beer. We tasted eleven beers and oddly enough, this motley collection more or less agreed on everything. What do I conclude from that? Well, I suppose, that when beers are good, bad or just indifferent and you are approaching them with an open mind, even if not to your taste, most people will recognise what is good and what is not. When you are doing comparative tastings, it all becomes reasonably obvious, though of course there were differences of opinion.

Were the beers all good? No. Some were poor, most were decent enough, but most were disappointingly and predictably samey. There was two stand outs in our list. Both were golden, complex, well bodied and hoppy. The modern face of bitter beer?  Maybe. Going back to previous posts there was little "innovation". It was a boring old roll call of Fuggles, Goldings, Northdown and Styrians and mostly brown beers.

Now I know micros need to have a "cooking bitter" and that a well made mainstream beer will sell, but I do wonder why, in a competition, they didn't put forward something more characterful? There does seem to be a general reluctance to push the boundaries here.

I also judged strong bottled ales. Not my forte really, but I was lucky enough to sit beside Cask Marque's inspector for East London where my flat is. He was able to confirm that the London malaise of warm beer is being pushed aside and that all over the capital, cellars are being re-equipped with decent refrigeration and that standards generally are rising. That's good news isn't it?

The Hawkshead Brewery is state of the art and the Beer Hall where we did the judging is a lovely modern venue. Hawkshead Organic Stout - drunk for pleasure -was superb. I also met Jeff Pickthall properly and you know, he's a nice fellow.
Posted by Tandleman at 09:18

Lazy commenting -- this is what I just said over at Beer Nut's gaff: "I've had the odd pint of transcendent bitter in the last year or so, but it is often tired and cardboardy, especially in London. Yellow beers and black beers are much more likely to get me excited, although some yellow beers are very disappointing -- just the brown ones with the caramel left out and the word "sun" in the name."

I used to be a bit baffled by your obsession with pale, hoppy beers, having had some really crap, astringent 'summer ales' and very few good ones, but I'm with you these days.

Was the beer that awful that someone had to spit it into a bucket? Sort of behaviour one would expect though of a wine snob- sorry merchant! Something a bit poncy, and also somewhat disgusting about spitting out one's drink. Why be a judge at a tasting if you're not man enough to swallow it?

Bailey. I need to expand my views on this sometime.

Paul. Well he was just being a wine type. He was a very nice fellow actually.

I know what you mean Tandleman, I used to get quite a few wine-salesmen visiting my former off-licence. Sometimes they would bring samples for me to taste. For obvious drink-driving reasons they would invariably spit the wine out after tasting. Somehow I just couldn't bring myself to do the same!!