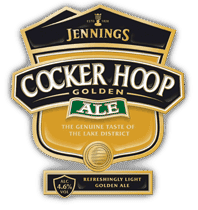 Flood hit Jennings will move production to other breweries within the Marston's Group until the brewery re-opens in January. Jennings head brewer Jeremy Pettman said: “We’ve decided to move brewing of some of our beers to our other breweries to ensure that our customers are not let down. "They will be produced under the supervision of myself and other Jennings staff. We’ll be working hard to get as close to the flavours of our Cumbrian beers as possible. “As soon as the brewery re-opens, production of all our beers will be moved back to Cockermouth.”

I have mixed views on this. While I can see that they don't want the Jennings name to vanish for a while, it opens up all sorts of unpleasant options for the future brewing of Jennings beers. And flavour match in a week or two? I don't really think that's likely. Maybe it would just have been better to keep them gagging for it for a couple of months?

A nice touch though is that Marstons will donate 10p of every pint of Jennings sold to the Cumbria Recovery Fund
Posted by Tandleman at 11:02

Given the past actions of breweries it is hard not be a touch cynical here - let's hope this is proved wrong.

Agreed that making a 10p/pint donation is a nice touch.

Peter, if Marstons did as you suggested, in the meantime all of the pubs that are deprived of their regulars Jennings ales would have to make other choices. Lots of them wouldn't return to the fold once the new beers were bedded in and popular. It would be a sure way to decimate the Jennings brand market share. It happened to Hoegaarden when it became scarce on the UK market for a time. The new owner of Liefmans are having to spend a lot to claw back market share for that brand.

I'd imagine they know the difference between the water in Cockermouth, to the water where they'll be brewing. If the water is that far out, it'll need to be corrected to manage the same or similar flavor profile as before.

I seem to recall an occasion twenty-odd years ago when one of the North-West independents had a production problem and the other brewers in the area stepped in for a while with supplies - possibly Tandleman remembers it more clearly.

This does create an opportunity to experiment - a Jennings at Wychwood collaboration, or Jennings goes to Ringwood.

Might make for an interesting change, and generate some welcome publicity from a very unwelcome disaster.

This doesn't really matter at all, Jennings stopped tasting like Jennings soon after Marstons got their hands on it, my guess is a change in the malt bill, gone are all the subtle coffee flavours from Cumberland Ale that made it unmistakable.

Knowing brewers of old they may just decide to close the place, "all very tragic but the cost of repairs was just too high, this hurts us as much as it hurts you, we can replicate the flavour, blah blah blah".

At least they're being open about it. I'd be more concerned if they did it on the sly and hadn't set a deadline for resumption of service in Cockermouth.

Do people rate Jennings, then? Personally, I've never been that impressed, but I can't say I've conducted an extensive survey.

Jeff - A fair point and I wasn't actually suggesting it. It was a hook to get people into the discussion, though no doubt it was an option that was considered and dismissed.