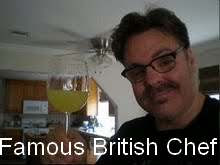 Has anyone noticed the astonishing likeness of British TV chef Nigel Slater to our own dear Sausage. I wonder if they are by any chance related?

Either way, a handsome pair I think you'll agree.

Labels: Lookylikeys
Email ThisBlogThis!Share to TwitterShare to FacebookShare to Pinterest

Rich. I admit there is a resemblance.

With his grub and your beer, you can come round to my gaff any time.

Well, you haven't tasted my beer. Difficult to convince anyone without them actually drinking it. I am very critical of beer. If it's shit, no one will ever taste it. In saying that, I don't brew shit. My two latest efforts I'd serve to anyone, anywhere. My London Porter is just amazing. A little smokey, mellow, dry, dark chocolate flavors. In a pyramid, it is in the middle between a dark mild, a southern brown ale, and robust porter. My English Pale I fermented on American Medium Toast Oak is also supreme. Beautiful sherry aromas, rich malt, pleasantly bitter. Shame by beer engine is out of commission for the time being. Plan B is in action. Proper Real Keg.

I would be very interested in tasting your beer, but Curb Your Enthusiasm put me off California. If Larry's not happy there, I won't be either.