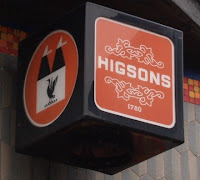 The Morning Advertiser has the news that Wetherspoons is buying five pubs from Punch Taverns. I read the list without expecting to know any of them, but I was wrong. One is the Childwall Fiveways Hotel in Liverpool. I know it,or rather, knew it rather well. Set back from a massive road junction - no prizes for guessing how many roads converge there - The Fiveways was one of the nearest pubs to where I worked in a Social Security office in South Liverpool over twenty years ago. It was usually the pay-day venue for lunchtime beer, for the simple reason that most banks were nearby, back in times when cash machines were a rarity, lunchtime drinking wasn't frowned upon and pay-day couldn't come quickly enough.

In those days Higsons of Liverpool owned it and many pints of Higgies Bitter were supped, while claimants sweated it out in the waiting room, waiting for claims to be assessed and their giros issued. It was also a stopping off point on the way home once in a while too, though usually we preferred the better beer choice at Wavertree, a few bus stops down the road.  Now it will be a JDW outlet by January next year, but to me, it will always be the fifties style pub it was when I first went in it. Splendidly old fashioned, redolent of polished wood, red handpumps, parquet floors and my beloved Higson's Bitter.
Posted by Tandleman at 14:28

It is interesting that this – and the Black Horse, Northfield, Birmingham – represent a move away by Wetherspoon's from their traditional town centre sites to more suburban locations, something I was saying was outside their comfort zone. It will be interesting to see how this development goes. They had a pub in a similar spot in Wolverhampton which they disposed of. For those who don't know it, the Black Horse is probably the most outwardly impressive inter-war "Brewers' Tudor pub" in the country.

Lucky you, TM. Down the road in Norris Green, none of our local hostelries served a decent pint. We used to drive to the Halton Castle in West Derby village ~ also a Higson's pub.

Are they ex-Spirit? I assume so, because otherwise there'll be sitting lessees in occupation and they'll have to buy them out too.

The report in the Publican says that all five are "unbranded managed sites", so will not have sitting lessees.

RedNev. Used to play darts in the Halton and then get the 12C back to Tuebrook, Happy days.

Didn't there used to be a Higsons pub in Stockport, opposite Mersey Square??

There did, the George - had a classic wood-panelled interior and also served Draught Bass. It's still going, but now a keg-only yoof-oriented emporium, totally remodelled inside :(