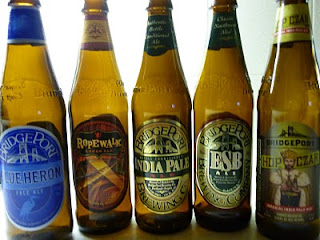 I first encountered BridgePort beers in 2001 (I think) when I first met my Yankee chums at the Oregon Brewer's Festival. One of our friends is a head honcho at the Gambrinus Company and organised for me a private trip round BridgePort Brewery, which they own. The Head Brewer then, as now, is Karl Okert. Now brewers by and large are splendid fellows, but Karl is more splendid than most. He was kind enough to give me a tour of his brewery and on one occasion, when the lovely E was all beered out, his wife took her out for less beery pursuits. Great people.

The Brewery Tap is in a wonderful old converted warehouse alongside the brewery and we spent a fair bit of time there drinking their excellent beers. Portland is a fantastic city and I have very fond memories of it. It is a beer destination par excellence. Recently Karl sent me some of his beers to enable me to renew my acquaintance with them and to allow my friends and I to taste them fresh. Eileen and I decided to give them a go by way of quality control.

First up was Blue Heron, named after Portland's City bird. Reminiscent of an English light ale, but with more body and hops, this was easy drinking and we both liked it. Ropewalk Amber was full bodied, slightly sweet with a barley sugar and hop finish. Opinion divided here. I again liked it, but E found it a bit too gassy. The IPA was next up. This one is bottle conditioned and shows it in a more complex mouthfeel, a firm malt body and a refreshing grapefruit hop finish, with some balancing bitterness. We both liked it a lot. Last for this tasting was ESB (6.1%) and it was special too. Like a souped up English Strong Bitter with a dry character and a full bodied mouthfeel which hid the alcohol well. We had two more, but these weren't tried. The Black Strap Stout is being saved for my mates in the pub to try (along with the others) and E didn't fancy the Hop Czar, so it was down to me to go it alone on that one immediately preceding this write up.

Hop Czar, described as an Imperial IPA, opens with a zing of C hops (it has Nugget, Chinook, Cascade and Centennial in it) and has all the bitterness, grapefruit and pine resin you want against a good malt base and hides its strength very well. It has such drinkability you'd suspect it was nearer 5% than the 7.5% it is. I polished it off far too quickly. Lovely stuff.

BridgePort beers have a distinct house style of balanced understatement. They are so well crafted that you have drunk the whole bottle before you know it. Each has noticeable poise and elegance. Even the Imperial IPA hasn't any of the harshness that you find in some hop monsters. You can just tell that these guys know what they are doing. They are a class act. If you ever get the chance to go to Portland, go without hesitation and go to BridgePort. You won't regret it and they still cask condition some of their beers for the Brewpub.

Told you they are classy.
Posted by Tandleman at 18:35

Been there, done it.

When are one of you beer bloggers going to do a piece on the incredible scene in San Diego? All I read about is New York, Chicago, Portland, San Francisco. Herr'man, certainly you must have enough dosh to fly to SoCal for a beery venture. In a way, you put up two fingers to the arts by not addressing San Diego. Get that Scottish ass on a plane and enjoy quality ales in a lush holiday environment. Bring your bird, Prescotti and Avery. Christ, the ultimate in SoCal beery tours is just a plane ride away!!

Huh. The way the pound is going, nobody will have enough money to go anywhere.

You see, bottled beer aren't so bad after all!!

I tried to get some Bridgeport in San Francisco but couldn't find them anywhere. It's definitely somewhere I'd like to visit - Portland is, as they say, Beervana!

Bottled beer has its place undeniably. I'd rather drink the beers in the Brewpub though.

I'm really torn on Bridgeport. Not on the quality of the various beers, mind, as this hadn't changed over the 11 years I lived within reach of the place. Your assessment is spot-on, I think: understated but GOOD. And Jaime and Karl are both great guys.

What I won't forgive is how the Company turned Portland's greatest, most classic of brewpubs a few years back and turned it into a yuppy shopping mall. The neighborhood was an old industrial district, and the brewery & pub was in an old (by Portland standards) rope factory--brick, wood, big, roomy, and beautiful. The neighborhood has evolved into an expensive downtown yuppie haven, and so the Company decided to cash in on this, at the expense of the beauty of the old place.

My oldest recollection of the place is from the mid-90's, standing and sitting out on the former loading dock on a quiet, rainy, autumn Saturday afternoon with pints (imperial!) of casked Blue Heron, which was a slightly different beer from the one that ended up being bottled later, FWIW. It is one of the finest moments I've ever had w.r.t. GoodBeer, and I've been to the Kulminator, 't Brugse Beertje, et. al., too.

We moved away in 2004, and soon thereafter, the place got remodeled. I knew that things had changed, but didn't realise the extent to which until our first visit back to Portland in 2006.

Here's what I wrote to the local homebrew club list after that trip:
Low point: Honestly, literally wimpering upon discovering in person what has become of my beloved Bridgeport. As I saw the brewery, and the missing building across 13th as I was approaching from the south in the streetcar, I had to get out and see what was going on, although I was actually on my way farther up the line to meet my better half. I really did almost break out *in tears* right there in the middle of the street.

We ate there that night, having figured that we should see the place inside and give it a shot, but, I believe that my days of visiting Bridgeport--the definitive PDX beer place for me for all time (partaking of a fine casked Blue Heron out on the empty dock in a pouring rain on a winter or spring Saturday afternoon in 1994 or so... sorry that I'm not a native, and the whole Orygun thing is still new to me) are now behind me. No sir, I don't like it.

"The place needs updating" as somebody here said back in the "Bridgeport Disaster" thread? Gag me. What else needs updating--the Kulminator? The Company has now what it wanted: a glitzier revenue earner. They COULD have held out, having the only AUTHENTIC pub for blocks around (blocks!!!), but hey, they didn't want that. Are they Evil? No, but don't try and sell me...sorry, tell me that the place is "just updated" or some such quatsch.

Where's that quiet room, where I met our Fred (Eckhardt) for the first time outside of a competition, sitting and quietly reading a paper with a pint? A bakery now.

Portland without my Bridgeport?

Fair point though as I haven't been back since they changed it, I can't say. other than to say it wasn't broke, so why fix it.

We had pizza on that loading bay, with splendid industrial views. Shame.

"Portland and Seattle are America's beer capitols." Who said that, Sausage?

One correction: Ockert, not Okert.

Nick is long-winded but accurate. The charming old ropewalk/pub you visited no longer exists. It's a huge overdone yuppie wonderland now and it's particularly a nightmare for those of us who remember when Bridgeport was a one-room pub with a constantly-changing range of Karl's creations on tap--the loading dock is long gone, along with the tracks and freight cars once parked next door.

Nothing wrong with their beer, though. Karl's always had a great touch and a huge affection for British ale.