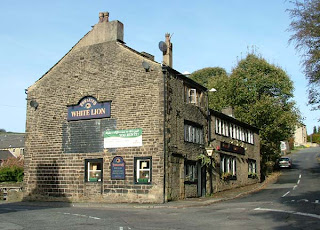 Yesterday I met a CAMRA colleague in the Landlady's new pub, the White Lion in Delph, a picturesque village in the Pennines just on the Greater Manchester side of the border, a fact that has this former West Riding outpost somewhat divided, as evidenced by the White Rose flag flying from the Band Club.

This is still in my CAMRA Branch area, so I'm the local Chairman which is rather nice really and makes introductions pleasant and me feel part of it, in a minor way at least. The White Lion is stone built on a corner and is warm and welcoming, having had the Landlady's 60 Minute Makeover. It has been decided, unlike most Delph pubs, to open all day and it was doing a fair trade when we arrived. One or two were even enjoying the spring sunshine outside on benches. Beers are from Thwaites of Blackburn and were a pleasant surprise, more of which later. The Landlady's first task was to remove smooth beer and install four handpumps and all are on all the time. She is selling them like hot cakes she says.

Thwaites in recent years have a lack lustre record in cask beer. Most of their pubs sell smooth these days, but things are changing. According to the Landlady, it is her record as a cask ale award winner that first attracted Thwaites to her, as they want things to change. Cask beer is booming and they are back in the game. Good for them. Before the pub changed hands the cellar was renovated with automatic tilters and new lines as well as four handpumps installed and the spear extraction used for the lone cask beer removed. I doubt if Thwaites have many pubs with four cask beers on at once, but here they have and they are selling.

What of the beers? Nutty Black is a lovely traditional mild; almost jet black in colour with sweet malt and a slight bitter edge. Very drinkable for a 3.3% beer. The Original Bitter was a surprise, though I only had a sample. Better than I remember, it was though underpowered at 3.6%, its bitterness slightly lost by a touch of wateriness. Wainwrights at 4.1% was pale, bittersweet and quaffable. It is her biggest seller so far and gaining popularity with her new locals. I didn't try Lancaster Bomber, but overall was impressed. Thwaites also do a range of seasonals and the landlady is already looking to have a fifth pump installed for that. She is nothing if not ambitious in selling cask ale.

In addition to cask there is a couple of genuine German imports in the shape of Warsteiner and Koenig Ludwig Hefe Weiss (to be replaced by Paulaner sometime in the future) and even a couple of cooking lagers, Carling and Fosters, so something for everyone, though I'll bet the Landlady will soon have cask as her biggest seller.

So, a good news story. It is early days, but we have a local pub revitalised, traditional beer success and a Family Brewer getting back to cask. See, it isn't all grumpiness and negativity here!
Posted by Tandleman at 07:27

So she's swapped Lees for Thwaites. From the frying pan into the fire, some would say! Much better location though than the THT and the locals have some brass, so she should do well.

Interesting snippet that they are replacing Koenig with Paulaner. Would have been better if it was Warsteiner, which is cack, whilst Koenig is probably the best thing Thwaites sells.

Nice continuity that she remains in the branch-she will have to move even further next time to escape your reach.

Too much negativity Tyson. This is a sweetness and light blog these days. (-;

I don't know why they are replacing KL with Paulaner though I'll try and find out. I agree KL is better but I don't mind Paulaner at all.

I like Paulaner-I'd just like to see KL and Paulaner both on the bar. IIRC Thwaites had the exclusive rights to KL in the UK. Perhaps the contract has simply come to an end?

It is very encouraging to see a Thwaites pub selling all the range. Top marks for that. Must be unique in the Branch-see I can do sweetness and light:)

Point of interest: it was mentioned some time ago that there were now no Thwaites pubs selling MIld in the Branch area. Can the WL claim another first?

We stopped in Delph and also Diggle on our Pennine Way walk last year, stayed with a very eccentric B&B a mile or two up the road. Beautiful part of the world. Light on cash machines and mobile signal but that was kinda liberating.

Nice pics. The Landlady hopes to attract more walkers for meals and drinks.

At first I thought, damn, she's sore if she went all the way to Holland to run a pub. But that's Delft.

What a splendid looking place.
http://tinyurl.com/yg9tu4 I see there's a bus! Nice.

IIRC, I found the Lancaster Bomber at one place near Lancaster and thought it was...I can't recall.

The venue in Southport where our folk club meets sells Bomber, with Wainwrights as an occasional replacement: both are good beers. Thwaites' Christmas beer, Good Elf, was wonderful: a 4.9% slightly sweet ruby winter ale, which was my favourite of all the seasonal beers I had last Christmas. Picture of pumpclip: http://tinyurl.com/ye73hxy

Thwaites is doing what Tetley's and its ilk should have done: diversifying its range and producing seasonal beers, instead of relying on a bog-standard boring product well past its prime. I think Thwaites is to commended for crawling out the smoothflow swamp.

That looks like a nice pub, Tandy, you are not wrong. Be nice to have a walk and pop in for a mandatory free glass of water and use the gents whilst traipsing in with my muddy hiking boots.

Looks like an excellent pub, Tandleman. Remember Delph vaguely from my time in Greater Manchester - nice part of the world up there in the Pennines. Also have fond memories of Thwaites Mild.

As an aside, Thwaites was the very first brewery I went round. (It was ultra-modern back in 1973!).

It's one I haven't been round though I have been there (in the offices).

Can anybody tell me that the Warsteiner or Paulaner sold in Thwaites Houses compares with the same beer sold in Germany. I have recently had a glass of Boddingtons that did smell of the real thing, but that is a diff. story.

It will be the same beer. Differences in pouring technique may make it behave differently in the glass, however.

Could you take a moment to translate the first paragraph for those of us living far to the west? The first half of the sentence appears to be in English, but then it devolves into something else entirely.

I don't think I can clarify my request without resorting to profanity.

Nutty Black's a good beer. I sold a fair amount of it the year before last, and I noticed it was on the Porterhouse in Covent Garden on Sunday.

Jeff - It used to be part of what is now West Yorkshire whose emblem is a white rose. It is now in the county of Lancashire, whose emblem is a red rose rose. Some of the occupants are wistful about that past connection.

Yorkshire was divided into different parts, known as "Ridings".

And a Riding is how far a lord could ride in a day, while waiting for his unmounted men to keep up?

None of you lot ought to be drinking Paulaner or Warsteiner in a Thwaites pub!

Erlangernick, 'riding' is from an Old English word meaning a third part, Yorkshire had North, East and West Ridings.

Is there any reason to read something into the fact that they ignored the South?

Much to be read Erlangernick ;-)