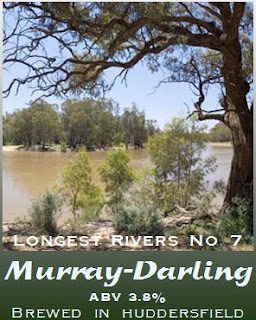 It's been a quiet week if you forget the budget and most beer drinkers would like to I suppose. I haven't said anything about it, but funnily enough I agree with most of what Cookie said in his blog; though tongue in cheek it had some merit to my mind, though I suspect his tough love approach won't meet with universal approval. I don't much agree with his views on small producers however, as I assume any positive action in their favour is to give them a chance to compete and grow - and why not? Competition is good and all that.

On Wednesday I encountered a rather nice smooth beer. Yes, honestly. I don't know who brews it (anyone know?) but Mann's Chestnut Mild, especially as it warmed up, was rather good for a 3% beer and adds weight to my thoughts that dark beers react better to nitrogen than others do. It was a night for odd beers with Webster's Yorkshire Bitter (smooth) also being available. Poignantly this was in the Woolworth Social Club, the only remnant of a thriving distribution network which now lies nearby and empty. One thing about clubs is that you keep seeing odd beers that you thought had disappeared.

Last night an old work colleague came to stay so I took him to Rochdale. The Baum had a good choice on, but my eye was immediately attracted to a Mallinsons pump clip. Murray-Darling is 3.8%, pale and hoppy and very drinkable. Tara, the brewster has Northern tastes down to a "T" and one of her beers is never enough. The Baum is starting to get Mallinsons more often and in my view, that's a very good thing. The barman told me an even nicer one had been on before ( I think it might have been Grand Canyon) but I had no complaints. This brewery just gets better and better, with an eclectic output of one offs which are usually pale, hoppy and bitter. Highly recommended.

Our final couple of pints were in the Regal Moon. Elland Argus was a heftier choice at 4.6% but delivered a dry, bitter and hoppy expereince. I finished on another favourite brewery. Hawkshead Organic Stout was roasty, bitter and smooth from the touch of oats in the brew and the perfect last pint.

So there you have it. Three recommended breweries and nothing brown and boring. Listen to your Uncle Tanders. He'll put you on the right track.
Posted by Tandleman at 13:59

Mann's has been round the block a few times. I believe it's currently brewed by Thomas Hardy Burtonwood who also brew Websters btw.

I wondered if it was them. They brew all sorts of weird odds and sods.

"...odd beers that you thought had disappeared."

The Derby Arms near Ormskirk sells, as well as six cask beers, smooth Walkers Bitter. I was almost tempted to try it out of curiosity.

Saw that Walker's smooth in a pub in Delph. Odd.

Did you see Harp lager on in club land?

Harp "Irish Lager" (sic) is available in the Hydes estate.

I'm not sure if it's still going, but until recently Robinsons continued to brew their own-brand Einhorn lager for some pubs.

You're underselling the attractions of the Baum, the beer was great, but the pub is a classic boozer.

Websters? Blimey. The only beer nobody missed when the brewery shut.

I didn't notice the lagers, but they are usually mainstream. Short run lagers ain't economical it seems.

Mallinson's are one of the most steady, underrated breweries in yorkshire right now. You're right - Tara and the crew have good, solid beers down to a t.

Another vote for Mallinson's - their bottled output is also very good. I must get some stocked in.

I was pondering a quick photo post at some point to include the old brewery livery you see on the outside of working men's clubs; the one nearest us has a huge, once-illuminated Younger's sign.

It's all history. Why not?

The Golden Buck on Manchester Road, Hollinwood (a pub that is up for sale and has been closed for periods) is currently advertising Walkers Bitter at £1.60 a pint. Don't all rush at once!

I must have passed this a thousand times, but have never been in it.

So about this Baum place. http://www.thebaum.co.uk/ Hey, who's that?

Is the word "Baum" fairly well known in your part of the world there? I was wondering if it meant what I thought it did, until I looked at the webbie, and there, sure enough, is a diagram of a tree.

How many pumps? Price per pint? How's the food? Sounds like my kind of place, except, it says it's a whine bar and restaurant, not a pub!

Just back from a sudden getaway to Rome, where we found some surprisingly good local casked Birra--stouts, pale ales, IPA's, even at non-extreme gravities--at three pubs in particular, two of which I guess you'd call "gastro-pubs". What do you suppose a "pint" (*) costs there then--regardless of strength or beer type?

So we moved to Franconia from Oregon 5-1/2 years ago, back when I was Mr. FineLagerAficionado. I would never have suspected then that I would eventually find a return to Franconia depressingly boring after a visit to Rome, beer-wise.

And I had my very first Brew Dog beer--a bottle of Punk IPA. Awesome, dude!

So what's the story with Walker's? Shite?

(*Actually served in unmarked 40 cl glasses, but calculated up to a UK pint.)

The Baum is a pub all right, Six handpumps, good tapas style food and £2.70 or so a pint.