There is an increasing feeling that the Police and Local Authorities don't use existing legislation enough to deal with anti social behaviour brought about by alcohol abuse. The argument goes that instead of enforcing existing laws, they bleat for the need for new ones, usually in the course of doing so, calling for even more restrictions on civil liberties. On the whole, I happen to agree with that point of view.

I mentioned before in this blog about the Saddleworth Brass Band Contest, which is held annually, spread around several villages and seemingly the sort of thing that attracts bad t 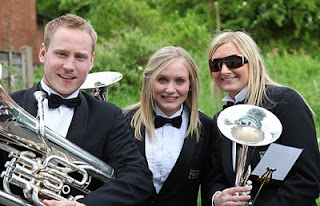 ypes and needs to be severely restricted. Now even the dullards in Oldham Council don't (I assume) feel they can ban the contest, but what they do feel they can do, aided and abetted by the local Plod, is to severely restrict the sale of alcohol, costing the local pubs much needed trade and curtailing the enjoyment of those attending. I won't go into huge detail, but originally 19 pubs had restrictions placed on them, including the Royal Oak, up in the hills in Saddleworth, which is nowhere near any of the contest and so isolated, that they get almost no custom on Band Night, as their customers are off watching the bands. I commend the Oldham Chronicle who document the farce well, especially how the hue and cry brought an intervention from Phil Woolas MP (who up until now I hadn't had much regard for) and a reduction to six, all in Uppermill, in the pubs that had to have bouncers, plastic glasses etc. All pubs however had an arbitrary closure of 11.30 forced on them though it was in Uppermill that all the previous arrests took place.

It is worthwhile looking back at the outrageous behaviour that caused the Public Guardians to rise up on our behalf. It seems that last year there were six public order offences related to alcohol, which while obviously regrettable, pales into insignificance compared to the many thousands that attend. So successful were the restrictions this year, that the number of arrests soared to 23, almost all again in Uppermill. Local residents allege that almost all the problems are caused by outsiders who bring alcohol with them, or buy it locally from off licences. In Greenfield where I was and no less than 62 bands performed, I saw no problems whatever. There was a mixed crowd of all ages and lots of women and children. Pubs were less busy than you might have thought though - my assumption is that given the well publicised restrictions on pubs and the subsequent doubt in people's minds about what would or wouldn't be open - caused a lot of people to bring their drink with them. The largest queue, apart from the ladies toilet in the King Bill, was for the local off license. Plastic glasses (unmarked and illegal) were in use everywhere and there were plenty of police around mingling with the happy throng.

Now I appreciate that the bobbies have a difficult job to do, but put simply, the enforcement of public order is their responsibility. Scapegoating licensed premises for trouble on the streets, in all probability caused by low cost alcohol bought elsewhere, is a concern. The need to target likely trouble spots is another. What isn't and shouldn't be their role is to restrict businesses and the public on the basis that it is better to punish the innocent along with the guilty and only be forced to back off from that when an MP intervenes.

I think the public deserves a more intelligent response.

Police and local authorities are not above the law and if they impose restrictions that are unsupported by evidence, they are answerable in law. Licensees who feel their trade has been compromised by unreasonable restrictions can sue and demand compensation. This is a classic example of forcing people from pubs to off licences and supermarkets where the booze is a lot cheaper and people can get bladdered for substantially less.

Own goal, I'd say. Now if those licensees sue, perhaps the idiots will be forced onto the back foot. Rather than complain, they should be seeking legal advice.

If there's a case, people should fight back. Local authorities and (believe it or not) the police are not the experts on licensing laws that they should be.

Blondie in the middle looks like a blonder version of my neighbour lass.