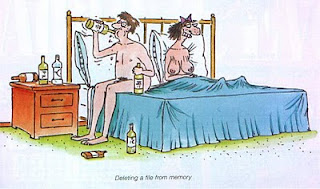 There is a fair degree of agreement that when cask beer is served at its best, that it is an unbeatable way of serving draught beer. Cool, but not cold, bursting with condition, clear, a tight creamy head - and yes it is better that way - full bodied, clean in aroma and so easy to drink. Of course your first mouthful in any beer is so important. It sets all your senses on red alert. "Is this going to be good?" is the silent question. In cask beer it tends to tell you so much more than keg beers. It is a is a much more nuanced product. Having done the visual inspection and the nose test, you are already forming an opinion, building up the anticipation, getting ready for that first mouthful that will confirm whether it is as good as it looks. Or, unfortunately as bad. Sometimes it isn't that good. Too often you can tell by that visual and olfactory inspection that things just aren't going to be as good as you'd like. Here's where the making love analogy starts. I think you'll be getting my drift by now.

There is a way to mitigate this of course. You drink in pubs you trust. You drink beer from breweries you trust. (There is a long list of breweries whose beer I wouldn't touch with a bargepole and they are almost all micros). You use the GBG. You check for Cask Marque signs. You ask ahead (of fellow customers) "What's the beer like today?" This doesn't help the casual drinker of course. He or she is as likely to be a loser in the lottery as a winner. I don't believe many will disagree that the possibility of bad beer is the biggest enemy of cask . It puts more people off than anything else. Nor should you expect redress at the bar. You will be told in all probability that "Everyone else is drinking it", "it is just new on today", "that's the way it's meant to taste" etc. etc. And this won't just happen in dodgy pubs either. It will happen with a straight face in pubs that are considered the best of breed and about beer from breweries that are worshipped here in the blogosphere and in the real world. In short, over your drinking career, you will be taken for a mug time after time. An inconvenient truth if ever there was one.

* If you are gay or a female, feel free to substitute gender as required.
Posted by Tandleman at 07:53

Labels: Cask, Getting it Right, Getting it Wrong
Email ThisBlogThis!Share to TwitterShare to FacebookShare to Pinterest

I know what you mean. You want to savour it and make it last forever...However, it's usually over quicker than you'd like!

Perhaps it really should be "Drinking a Pint of Good Cask is Like Making Love to a Beautiful Woman"?

Excellent post - and that is the point, the quality of the good ones is worth it for enduring the mediocre ones.

Indeed, while micros brew a lot of the best cask beer in Britain, some of them undoubtedly brew the worst.

You've reminded me of a Tetley Bitter advert in the 70s, I think it was. A man is standing in a pub with a pint and a beautiful blonde enters the pub; they exchange meaningful glances, he looks at his beer and decides to stick with that instead. Completely implausible for any beer, but especially for a pint of Tetley's.

Completely true. The wonderful pints make up for the mediocre and downright bad. There's probably a life lesson in there somewhere.

I'd also add that beer is one of the few products where you don't have to pay over the odds for the best there is. About three quid a pint can get you beer the equal of any.

I like your use of the word 'middling'. The middling pints are are the really annoying ones.

If it's actually off, you get it changed.

If it's good, you drink it.

If it's just boring or a bit out of sorts, these days, I tend to abandon it on the bar, and sulk about the money I've wasted. I can't be bothered to force down mediocre beer.

Bailey said "I can't be bothered to force down mediocre beer." I'm the same and I've got to the stage where I leave beer if it isn't good and order another.

As for the analogy... I get it, but don't you sometimes want to take a feisty Belgian girl home? A dark-skinned and cool Italian, a free-spirited Dutch girl, a tattoos and piercings punk from the US? A little variety, perhaps? I like the flirtation bit (at least in my drinking) for now, maybe I'll settle down in a few years.

A good pint of cask ale is a wonderful thing. No denying that. Average pints are just so disappointing though, especially if they are from good breweries.

Given the choice, I think I would prefer the woman.

@mark:well yes, but the point I was making wasn't as wide as that and anyway, to continue my analogy, that would be wanton promiscuity. Which indeed has its place, but ultimately does not satisfy.

@Bailey: that's what I tend to do too, but while I hope by leaving my unfinished pint on the bar I'm making some kind of statement, I doubt if it is taken on board.

So the bottle of Brakspear Triple is like a full bodied, ripe and fruity middle-aged woman out on a hen weekend?

If so...I'm certainly enjoying her company right now. I hope my wife doesn't find out!

Mmmm. What a lovely analogy. I like mine zesty, with a good body, and able to satisfy me all night. The same goes for beer.

And you can't say fairer than that!