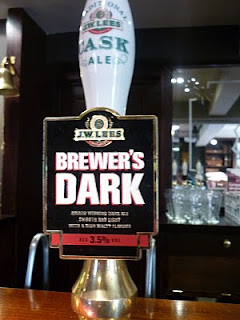 I read somewhere recently (can't remember where) about the resurgence of mild as a drink and as a fan of the style, I was pleased to read it, but this endangered species needs active promotion to climb back from its near extinct current state. CAMRA's Make May Mild Month campaign aims to do just that.

Now I am lucky enough to live in an area where mild clings on as a drink you can readily purchase over the bar and am a regular drinker of it, so I do my bit. Back to promotion though. Thus it was I found myself at Lees Brewery early on Saturday morning to launch my CAMRA Branch's contribution to the first day of the campaign. Lees Brewer's Dark is a former Champion Mild of Britain and is very dark, chocolatey and luscious, with a tight creamy head. It drinks very easily indeed. It was a good start to the day and with the first going down at around 10.20 in the morning, a perfect breakfast pint.

The coach then took us on to the Hare and Hounds (The Dogs of Tyson fame) where four more milds awaited us, with Pictish Black Diamond Mild being considered by those present as a very good example of the style. Then to Rochdale and the Baum, where two milds were available (one from local brewery Green Mill being favoured) and the Regal Moon where no less than six were on the bar, ranging from Phoenix Black Shadow -another local beer - to rarer milds from Hook Norton and Allgates. Wisely and thoughtfully, Chris the Manager had dug out the third pint glasses, allowing all the beers to be tasted easily.

Our final official stop saw us at the Ashton Arms in Oldham, newly elected as our Pub of the Year, where more Phoenix was drunk, though two milds were available. All the mild handpumps had pump clip crowners in each venue, urging customers to give mild a try, so hopefully there will be a lasting effect. Not an official part of the trip, but just round the corner, the Squire Knott had a determined show of strength, marking its up and coming status as a cask venue with four more milds. Coach House Gunpowder was my choice, a little stronger at 3.8% and my last drink of the day.

So, at least 16 milds available (and sampled) and all were pretty damn good. Go out and seek some mild this month. I doubt if you will be disappointed.

Another good thing about mild is that it is not as intoxicating as most other beers. After a full day out I was able to go home and follow the sub titled Wallander on TV. Proof I'd say.
Posted by Tandleman at 07:51

"Mild, the drink that makes you watch subtitled Wallander". Not sure that will catch on as an advertising slogan:)

Not so catchy I agree. Better work on it.

'Perfect breakfast pint' - that resonates in so many ways. That works as an advertising slogan.

It's times like this that I miss living in the North West - only one pub in our branch has signed up for 'May is Mild Month', as it is apparently notoriously difficult to sell the stuff in the North East. The past three years at the Bacchus seem to tell a different story, but no one else is listening. If I'm very lucky I may get some Brewer's Dark, care of Punch's Finest Cask list, at the Duke of Wellington, but the landlord here was reluctant to order any because of the stigma attached.

Our mild crawl is this Friday. Southport's not well off for mild, but enough pubs sell it to make a crawl possible. I support the "Make March Mild Month" campaign, as May is when the summer and golden ales start to appear. Still, I'll try a few; Black Cat is probably the best mild in town.

Further proof that the UK is more advanced than the US. Not a $&#(F mild in sight around here.

I thought you lot drank mild in Chicago! That's in the US.

Tanders, you suck. I have loved the mild I've been able to find, both in the South and the North. So much so, that I think I need another week or so to explore.

Am currently planning a mid-July trip to England, landing at BHX and leaving from there, MAN or LPL. First a couple of nights "in" Oxford, then 5 or 6 nights to be spent on the coast(s) --for walking, not lying on the beach. But...where?

I've been to Plymouth, Bristol, Tandyland, Lancaster, London & Oxford, and have spent a day in the Lakes District.

We'll not be hiring a car, and I'm thinking of the Dorset and Somerset coasts, just to save on travel time. I know Wales and Cornwall are lovelier, but I'm doubtful of Devon & Cornwall for this trip. Wales is indeed possible, but of course longer ways around by train.

How's the beer compare between Weymouth & Bournemouth and South or North Wales? Or in the Cotswolds? All brown muck? We like pale, hoppy, & light.

And what's Shrewsbury like? Worth an extra couple of hours during train connections?

Milds are black to dark brown to pale amber in colour and come in a variety of styles from warming roasty ales to light refreshing lunchtime thirst quenchers. Malty and possibly sweet tones dominate the flavour profile but there may be a light hop flavour or aroma. Slight diacetyl (toffee/butterscotch) flavours are not inappropriate. Alcohol levels are typically low.

•Pale milds tend to have a lighter, more fruity aroma with gentle hoppiness.
•Dark milds may have a light roast malt or caramel character in aroma and taste.
•Scottish cask beers may have mild characteristics with a dominance of sweetness, smooth body and light bitterness.